Kyle Balzer
Feb 7, 2019 7:35 AM
Previous Next
1 / 1 Taylor Gauthier (#35) defends his net as a Vancouver Giant skates on the attack with Ryan Schoettler (#16) chasing behind him (via Prince George Cougars/James Doyle Photography)
Expand
Previous Next

This may be the phrase to describe the Prince George Cougars Wednesday night after climbing out of a 0-3 hole against the Vancouver Giants.

After potting the tying marker mid-way through the final frame, the BC Division leaders got the 4-3 win less than a minute into overtime at the CN Centre.

Taylor Gauthier was between the pipes for Prince George for the 40th time this season and made many saves in the second half of the contest to aid the Cougars in their comeback attempt.

The scoring brigade that was the second period started with the Giants netting three goals less than six minutes apart.

That was followed by back-to-back power-play goals by the Cats in a span of four minutes, including one with 10 seconds left in the frame.

Vladislav Mikhalchuk and Josh Maser each got their 20th tallies of the 2018-19 season, while extending Prince George’s special team’s streak to six power-play goals in five consecutive games. 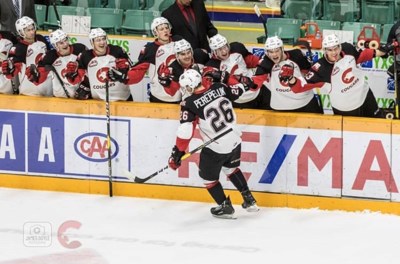 Reid Perepeluk got the monkey off his back after 38 games, scoring his first of the season unassisted and tying it up at 3-3 in the third period.

A point gets the Cougars up to 38 on the season with a record of 16-30-4-2, putting them eight back of the second wild-card playoff spot.

The possible upside going into their weekend road trip is that they start in Kelowna, a team Prince George has had success against this year.

Thus far, they’ve played each other eight times in the nine-game season series; the Cats have prevailed six times against the Rockets.

A win at the Prospera Centre Friday night could not only help the team in the playoff race, but could add on to the confidence they gained tonight in coming so close to bringing down the Giants.