B.C.’s best team stepped in the way of what could’ve been a sigh of relief for the Prince George Cougars (on their coach’s birthday of all days).

Instead, the Vancouver Giants doubled up on the Cats 4-2 Tuesday night at the CN Centre, handing them their 10th consecutive loss, something the franchise hasn’t recorded in the last half-decade.

Coincidentally, the last time this happened was during winter in the 2014-15 season, losing between Jan. 7 - 25 and five of those games on home ice.

This time around, five of Prince George’s last 10 defeats (Jan. 16 - Feb. 5) were also at the CN Centre, a heartbreak for fans nonetheless who are hoping the Cats can break free of the current drought.

The one streak the Cougars don’t want to accomplish is 12 losses in a row, which is what happened in 2014-15; there were two more defeats that followed that 10-game skid. 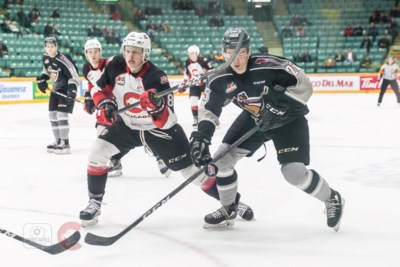 Despite the streak, the team made the playoffs, but lost the first round in five games to the Victoria Royals.

Prince George plays the second of their mid-week doubleheader with the BC Division-leading Giants tonight (Feb. 6) with a 7 p.m. puck-drop.

After that, they go back on the road for another brief two-game trip to Kelowna and Vancouver and the players would like to board that bus in better spirits.

Now, the one streak the Cougars hope to continue is their special teams, who have now scored a goal on a power-play in each of their last four games.

Vladislav Mikhalchuk continued that trend Tuesday, potting the puck on Vancouver’s Trent Miner after taking a quick pass from Ethan Browne late in the third period.

Cougars’ captain Josh Curtis scored the first goal of the night for the home in the second off of a smart two-on-one play conducted by Tyson Upper.

Taylor Gauthier made 27 saves on 31 shots; he was named the team’s Player of the Month for January prior to the game.

He will likely start between the pipes tonight with Isaiah DiLaura out day-to-day with an upper-body injury he suffered during practice earlier this week.

Prince George called up 15-year-old bantam draft pick Tyler Brennan to serve as the back-up on an emergency basis.

Raiders roll over Cougars in third-period outbreak
Jan 17, 2019 9:35 AM
Comments