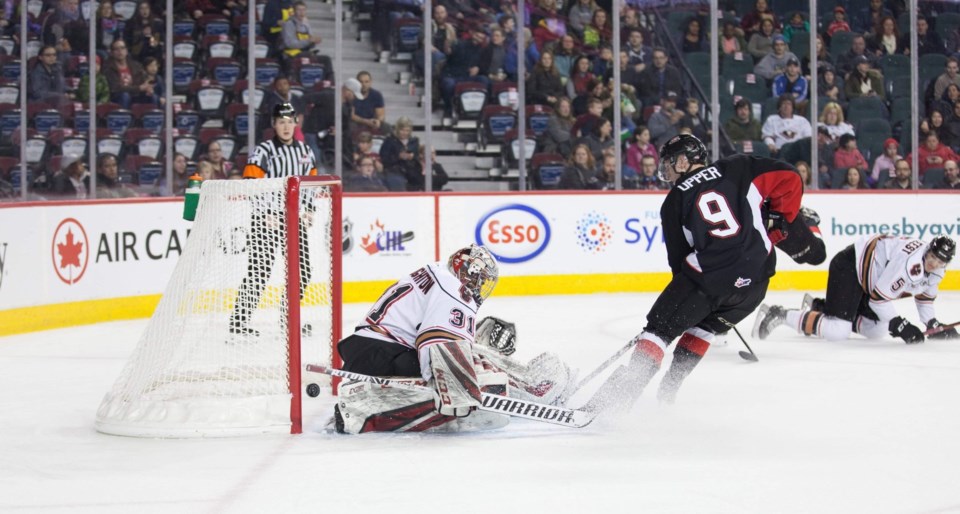 That sums up the weekend for the Prince George Cougars after dropping all three Alberta games, only managing to score a single goal in each one.

The final scores were 4-1 in Calgary on Friday, 5-1 in Red Deer Saturday, and 2-1 in Edmonton Sunday afternoon.

As you can see, the Cougars only managed to score three goals this entire weekend.

Here's a game-by-game breakdown of what happened:

Cougars’ goaltender Taylor Gauthier put on a show in his hometown against the Hitmen, stopping 45 of 48 shots and was named the game’s second star.

Prince George did open the scoring Friday night at the Saddledome, courtesy of Tyson Upper’s third tally of his rookie season with the assist by Jackson Leppard.

From there, the Hitmen netted three consecutive markers, including one on a power-play early in the third period.

The final goal by Calgary was an empty-netter as the Cats’ attempted a comeback late in the final frame.

The following night proved to be a different challenge against a high-flying Red Deer Rebel offense.

After the home team lit the lamp to start the contest, Curtis put Prince George on the board with his eighth of the year, sending the 1-1 tie into the locker-room.

The Rebels then scored four unanswered goals, including two within one minute of each other in the third period and two from leading-scorer Brandon Hagel, who now has 74 points in 45 games.

Isaiah DiLaura was between the pipes from the Cougars, making 29 saves on 34 shots.

Prince George returned to Rogers Place in Edmonton with a winning record over the past two seasons, but it was the Oil Kings coming out on top this time.

The Cougars lost 2-1 despite opening the scoring for a second time in three nights; Vladislav Mikhalchuk potted a power-play goal from Joel Lakusta and Ryan Schoettler halfway through the first period.

Connor McDonald tallied two goals in two minutes for Edmonton in the second, and Prince George could not muster a comeback in a scoreless third.

After the weekend, the Cougars now hold a record of 16-27-3-2 for last place in the WHL’s Western Conference, five points back of the second wild-card spot.

That is currently being held by the Seattle Thunderbirds, while the Kamloops Blazers, after going 2-1 on their three-game weekend stint, are four points ahead of Prince George for fourth in the BC Division.

Prince George will visit the Blazers later this week for a brief two-game BC road trip, facing off in Kamloops on Friday and in Vancouver on Saturday.

The Cougars return home to the CN Centre on Feb. 4 and 5 to take on the Giants.