On December 12,1970, Roy Spencer, father of Brian Spencer, a hockey player with the Toronto Maple Leafs was shot in front of CKPG Radio/TV. He had forcefully entered the station and held up the eight staff working that night.
Dec 9, 2017 8:44 AM By: Carole Fawcett 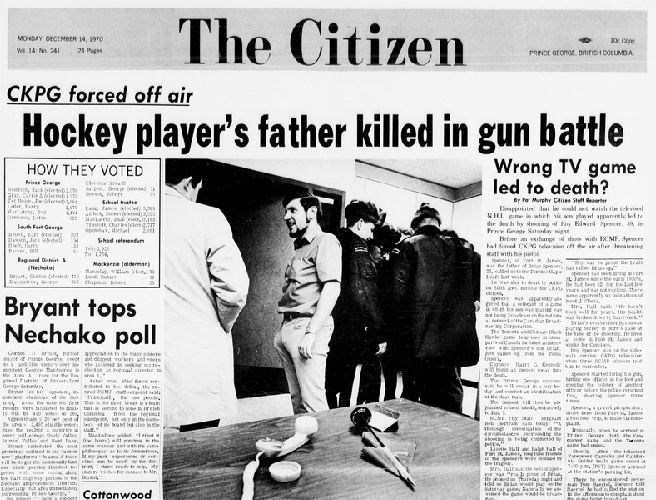 The Dec. 14, 1970, front page of The Citizen reported on the tragic confrontation between Roy Spencer and RCMP after he stormed into the CKPG studios.

On December 12,1970, Roy Spencer, father of Brian Spencer, a hockey player with the Toronto Maple Leafs was shot in front of CKPG Radio/TV. He had forcefully entered the station and held up the eight staff working that night. Carole Fawcett, one of the employees on that night, recalls what happened that night 47 years ago and how it changed her life.

There was a full moon on Dec. 12, 1970 as I drove down to CKPG Radio and Television. My soon-to-be-fianc, Stu Fawcett was the news director and had asked me to help out with the municipal elections, as we both worked at the station. Little did I know that the full moon would live up to its reputation.

I arrived at the station at 7:35 p.m. in preparation for a busy night. I was on the phone when I noticed reporter Tom Haertel talking to a man in the front entrance. The door to the station was locked for the evening and only those who were working were allowed in.

Tom rushed into the foyer, mumbled something to me and then walked quickly down the hall to the newsroom.

Suddenly, the man he had been talking to was in front of me, looking wildly agitated and waving a cocked nine millimeter gun at me. He saw that I was on the phone and lunged toward me, grabbing the phone, hitting me on the face and smashing the phone to the floor.

I remember backing up against the wall, my brain paralyzed by fear. Within seconds, he left me and continued toward the newsroom. I ran for my life to the television studio to warn them. I remember flinging the studio doors open only to find that shock had removed my ability to speak.

Luckily, Haertel raced in the other end of the studio, and said, "there's a man with a gun at the front, call the police." Tom then left out the back door to wait for the police. Fiori D'Andrea, the TV production manager immediately picked up the phone and called the RCMP.

The moment Fiori hung up the phone, the studio door opened as the gunman herded reporters John Rea and Stu McAllister into the studio, with the gun in the back of Stu Fawcett.

Fawcett said, "It seems we have a problem here, this gentleman would like the television turned off."

The man with the gun was Roy Spencer, the father of Brian Spencer, the hockey player who played with the Toronto Maple Leafs. Roy was in a near rage that we were not broadcasting his son's hockey game that night. He had driven from Ft. St. James with guns, ammunition and plans to destroy the CBC.

As a CBC affiliate, we were not scheduled to broadcast the game. He lined us up in the TV studio and told Don Prentice, the program manager, that he wanted the television turned off.

Continuing to point his gun at us, he said, "I am very disturbed about the CBC and I don't want to kill anybody. But I have killed before. I killed many times in the commandos. Turn off the television!"

Soon after that, Spencer left the station the same way he came in, telling Prentice that he would hold him personally responsible. When Spencer left the studio, we ran outside into the snowy December night and as we did, there were sounds of gunfire.

When Spencer went out the front door, he was met by three RCMP officers telling him to stop. He turned around, commando style, firing at them. One RCMP officer was hit in the foot and another officer's holster was hit by a bullet.

When it was over, I was escorted in the front door past Spencer, who was lying in a pool of his own blood on the sidewalk. I was numb with the horror and shock of it all.

In the 1970s, we were not offered any counselling or help with trauma. I quit soon after that, feeling traumatized by being in the same environment.

The whole episode took less than six minutes from beginning to end. I was introduced to the meaning of fear that night. I had never experienced such a terrifying and nerve-shattering encounter that defines life and death with such impact. I was 22 years old and the feelings of fear stayed with me for decades.

Now, as a professional counsellor, I recognize that I was traumatized. I dealt with it while taking a course on trauma as part of my educational credits as a counsellor. Ironically, the person I was partnered with in the course was a retired RCMP officer. I was able to release the emotional charge from my limbic system (the place in our brain where we store emotions) and move forward in my life.

As psychologist Bessel Van der Kolk once wrote: "Traumatized people chronically feel unsafe inside their bodies: The past is alive in the form of gnawing interior discomfort. They learn to hide from their selves."

It is likely that Spencer also suffered from PTSD, given he was a commando in the Second World War. Sadly, his demons came back and manifested themselves on the night of Dec. 12, 1970.

- Carole Fawcett is a counsellor, writer and editor in Vernon.