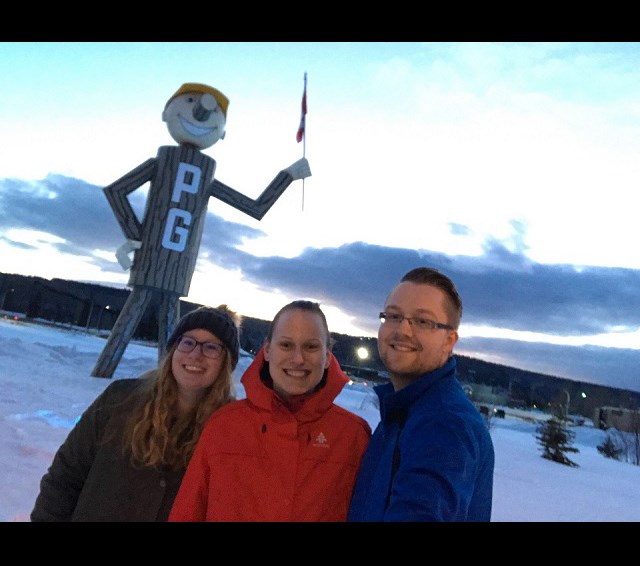 [From left to right] PrinceGeorgeMatters newsroom staff Hanna Petersen, Jess Fedigan and Kyle Balzer pose for a photo with Mr. PG, who turns 60 years old on May 8, 2020. (via Kyle Balzer)

Hard to believe that Mr. PG is 60 years young!

On this day in 1960, Prince George’s famous mascot was created to symbolize the city’s forestry industry and the community’s overall personality.

It originally started as a 1.5-metre statue in front of the former downtown Simon Fraser Hotel, says the Prince George Heritage Commission, but because of his growing popularity at the time, it was decided to make an 11.6-metre Mr. PG instead.

It famously premiered on a float during the 1960 May Day Parade and even took home a second-place prize in the Pacific National Exhibition (PNE) parade a year later.

Mr. PG now stands smiling to this date at the intersection of Highways 97 and 16.

It’s very hard for anyone not to look up at his face and smile, knowing that you’re being welcomed into a community filled with generosity, loyalty and prosperity.

We at PrinceGeorgeMatters want to wish Mr. PG a very ‘Happy 60th Birthday’ and wish him 60 more years of community pride.