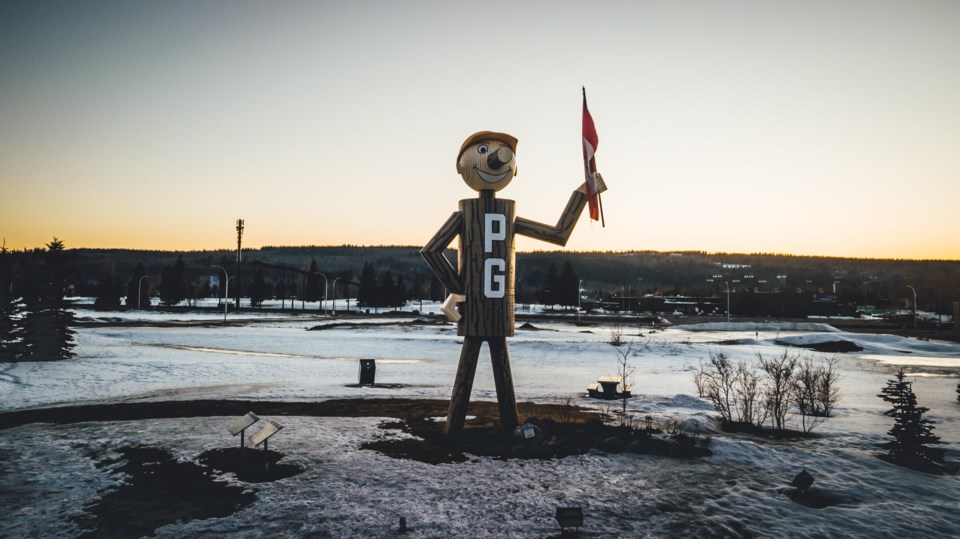 Mr. PG greeting all of the north with a big smile. (via Darrin Rigo)

Although Prince George’s beloved mythical log man was awarded second place, beating out Penticton’s Giant Peach and the Enchanted forest, he ultimately lost the title (by the tiniest margin of 1.8 per cent) to the Coombs' Rooftop Goats in Nanaimo.

The bracket competition took place on Twitter spearheaded by CBC municipal affairs reporter Justin McElroy, who has conducted similar B.C’s best competitions in the past.

We've talked this through. We've heard the endorsements. We've made the hype videos.

There's only one thing left to do: determine what is the greatest roadside attraction in all of British Columbia.

Back in December 2018, McElroy gave Burnaby the accolades of having B.C.’s best flag.

However, once Mr. PG made finals and the title of B.C.’s best roadside attraction was in sight, the people of Prince George and northern B.C. rallied together to try and get the mascot his crown – even gaining the attention the rock band KISS in the process.

The competition even got #MrPG trending across Canada during the finals, which took place last night (March 25).

Whoever got the most votes on Twitter before the adjusted final time of 10 p.m. would win, and Mr. PG came out of the gate with a slow start and only 22 per cent of the vote.

Then, around 1 p.m., Mr. PG climbed to 42 per cent of the vote, getting closer to the Coombs' Goats at 58 per cent, but it wasn’t until the evening that the shenanigans really began.

City councilors, school district representatives, the Huble Homestead, MPs, MLA Shirley Bond and journalists from across the north pleaded for the masses to vote Mr. PG as B.C.’s Best Roadside Attraction and the race to 10 p.m. became a nail-biter.

Let’s make it happen #CityofPG and everyone who lives in our region, we want #MrPG to be BC’s best roadside attraction. We can do this! https://t.co/mfSP02uSbu

The vote totals flip-flopped between a complete tie and 50.1 and 49.9 per cent as the struggle for the crown persisted.

Grammy winner and Mr. PG-supporter Alex Cuba tried to rally his B.C. fans to help get a surge in votes for the 27 ft. tall legend.

To all my BC fans, lets make Mister PG win this race. We got this!!. https://t.co/YZGl9nU0AM

Prince George’s two-time Jeopardy champion Matthew Church also came out of the woodwork to throw his support behind Mr. PG.

“I’m going to break my nearly 4-year-long Twitter hiatus to put my full and unconditional support towards Mr. PG,” he tweeted.

Not being able to handle the pressure of the intense competition, local photographer Darrin Rigo jumped in his car and paid a visit to the corner of Highway 16 and 97, tweeting out a video to show the world the joy of Mr. PG.

I couldn't handle the suspense so I literally had to go out to go on location and see MR PG himself - THE BEST DARN ROAD SIDE ATTRACTION IN BC. COME ON GO VOTE NOW. Is anyone visiting the goats right now?! Didn't think so. pic.twitter.com/m0grFsQ2OF

But, it was Coun. Kyle Sampson who informed rock-legends KISS of Mr. PG’s plight, reminding the rockers of his can-do attitude when it dawned full-KISS makeup to support the band's 2011 performance in B.C.’s northern capital.

‘Hey Kiss Remember the time our beloved Mr.PG donned the Demons makeup to promote the long-awaited concert in 2011,’ Sampson asked.

‘Yes we do and we loved it! Prince George Rock City!’

But, as the time ticked closer to 10 p.m. when the polls closed for good, the competition remained neck-and-neck.

A last-minute surge from southern B.C.’s goat fanatics, however, pushed Mr. PG into second place and the Goats on the Roof into first.

Mr. PG ultimately lost the frivolous competition with 49.1 per cent of the vote and 50.9 per cent going to Coombs' Rooftop Goats.

“B.C. has many big and weird and fun things on the side of highways,” tweeted McElroy summarizing his final thoughts.

“The love Prince George has for Mr. PG is truly inspiring. This was a fun distraction as the world around us changes bigtime!”

The competition and love for Mr. PG also brought out the creativity of many residents who were fighting for his honour.

This is the dumbest thing I ever spent 2 hours making but its 2020 and Mr. PG is here to save us all and man I really need this win on Monday. pic.twitter.com/3nLnQmpKe7