'There will never be closure' 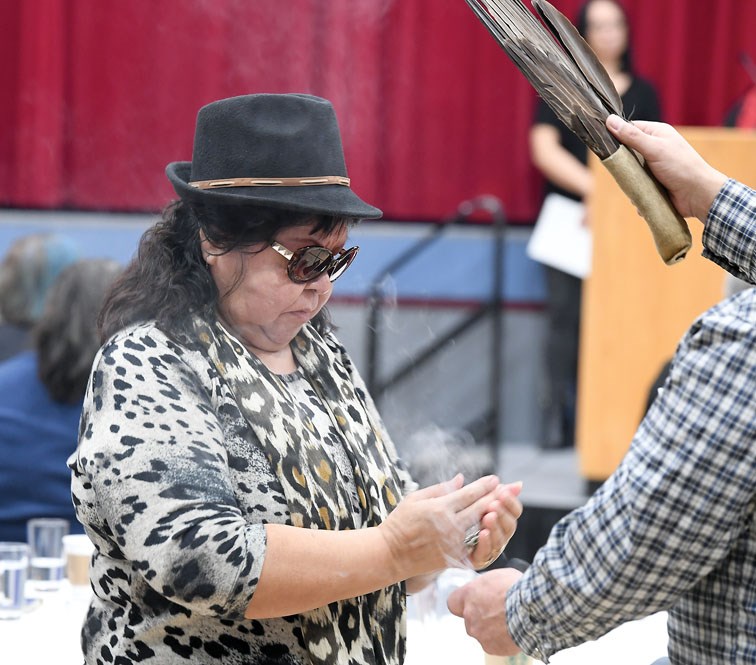 Matilda Wilson was in attendance at the National Inquiry into Missing and Murdered Indigenous Women and Girls on Monday at the Prince George Civic Centre. Wilson is the mother of Ramona Wilson, whose body was found on April 9, 1995 near the Smithers Airport. Ramona Wilson was 16 years old at the time of her death. – Citizen photo by Brent Braaten

Family members of missing and murdered women gathered to present testimony to the National Inquiry into Missing and Murdered Indigenous Women and Girls on Monday morning at the Prince George Civic Centre.

Prince George has been a flashpoint in the Canadian conversation about missing and murdered indigenous women. The Highway 16 corridor between Prince Rupert and Prince George, or the Highway of Tears as it has become known, has been the site of the disappearance or the discovery of the remains of roughly 30 indigenous women since 1969.

Thirty family members are scheduled to present statements about missing or murdered loved ones through Wednesday. Statements will be given privately to inquiry staff.

The inquiry was struck by the Trudeau government in 2015. The move followed years of criticism by families of victims, who claimed that Canadian law enforcement personnel were systematically de-prioritizing the investigation of indigenous women and girls who had gone missing.

The inquiry has been beset by internal turmoil since its inception. Last month, executive director Debbie Reid became the latest of many high level staff to resign.

Brenda Wilson-John's sister, Ramona, was murdered in 1994. She has spent over 20 years trying to found out what happened to her. A memorial walk for Ramona has taken place each year for 22 years.

"There will never be closure, but it will be one part of healing, that her murderer would be convicted," said Wilson-John.

"Until that day, we have to try to find hope and support and courage from many of the people that are here and the family members that are there for us."

Wilson-John helped gather many of the family members together for the Prince George stop of the inquiry. She said she hopes the outcome of the inquiry, which has been underway for almost a year and a half, will result in an action plan that will address the systematic reasons why violence has afflicted so many indigenous women.

According to Mary Teegee, director of child and family services at Carrier Sekani, indigenous women are six times more likely to be murdered than non-indigenous women in Canada.

Teegee opened the event by describing the lengthy process of lobbying for recognition from various levels of government of missing and murdered indigenous women. It took years for the pattern of disappearances to be recognized by law enforcement in the region.

"Those actions were not recognized by any level of government, never mind by the RCMP," Teegee said during her speech.

After family members organized a walk from Prince Rupert to Prince George in 2006 to coincide with the Highway of Tears Symposium that same year, various levels of government in the north finally began to take notice. A key demand of families was the establishment of a government funded transit system along Highway 16.

"Finally 10 years later, we finally got some level of transportation in the north, but it took 10 years of lobbying," Teegee said.

"I tell this story because it's taken so many years for us to get to where we're at now."

B.C. Assembly of First Nations Regional Chief Terry Teegee expressed dismay at the internal divisions that have beset the inquiry. But he said it was important for First Nations' organizations to work with the commission.

"I think this might be our only shot at having a federal inquiry for missing and murdered indigenous women," he said.