Prince George RCMP reflect on policing in the city during 2019

Prince George RCMP has been busy over the previous 12 months, receiving more than 47,000 calls for service in 2019.

“Probably the most significant thing about 2019, when we sat down to look at the stats, is they continue to increase,” noted Wright to council.

“When we look back that has been a consistent trend over the last six years putting us roughly 25 per cent higher than we were in 2014.”

He said while a lot of these numbers don’t necessarily relate to criminal behaviour, the high volume puts a strain on RCMP members each and every day.

However, Wright pointed out, although the calls for service are increasing, the prisoner count continues to decline.

He explained with the trend in legislation, officers typically release persons on non-violent offences with a court date, as holding people in custody is seen as a last resort.

“I fully anticipate our prisoner count will continue to go down over the next year and several years. If we do move forward to the point where we can get a sobering centre up and running in this city it would see a significant drop there as well,” added Wright. 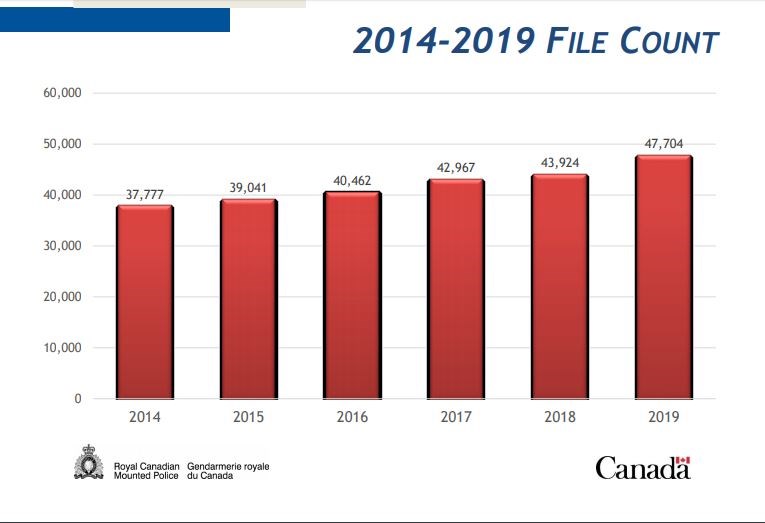 The statistics provided by the RCMP this year are quite comparable to previous years as Mounties are recording their files in a new system.

“Statistics Canada changed the method in which they make us report our statistics as of 2019 so it’s really comparing apples to oranges,” explained Supt. Wright.

“Prior to 2019, every report that was called in or relayed to the police was essentially scored as unfounded until we had enough evidence to prove that the offense had occurred. As of 2019, given pressure from social attitudes essentially every incident that comes to police now we treat as if it is founded or unless we find that it didn’t occur or was unfounded.”

He said because of the new methodology across the country, the statistics aren’t overly helpful as a comparison for this year.

“We thought of a way to present this in a manner that was useful so what I came up with was all calls for services – whether it was founded or unfounded – so a crime may not have actually occurred but this is the only kind of ballpark comparison we can have.” 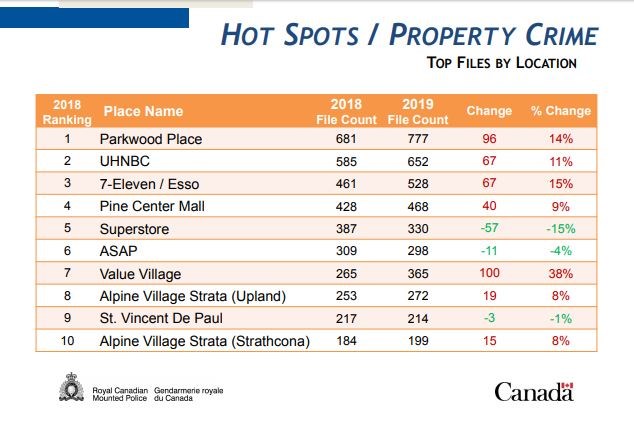 In terms of property crime, Wright noted an apparent increase in most of the high-rate property crime areas, but it’s in line with a typical one-to-two-year variance.

“With that I anticipate property offences will continue to rise and that is due to a few changes in legislation and the court system that we are experiencing and obviously the social trends of the opioid situation we are facing.”

“What we do, or started to over the last couple of years, is take a look at those hot spots and liaise with those persons to help strategies on how to mitigate that behaviour and reduce calls for service," explained Supt. Wright.

He said some increases, like the one seen for 7-Eleven, are actually because the location is engaging with the RCMP to make calls and report offences which they might not have typically done otherwise.

Wright noted, however, that the presence and focus in the downtown area has really pushed a lot of that behaviour towards other areas including Parkwood and the Gateway. 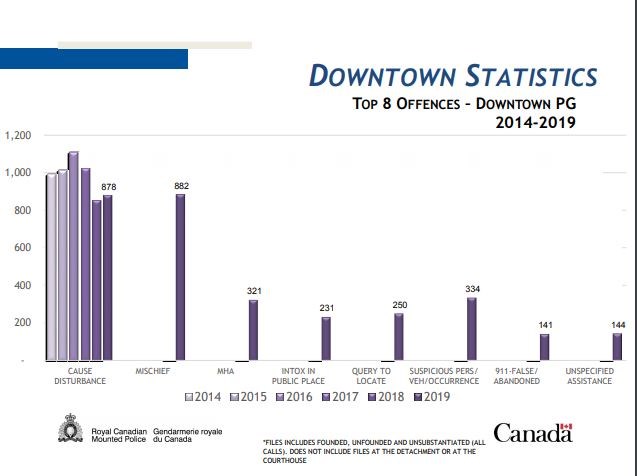 Wright says the Downtown Safety Unit, which works in partnership with bylaws and social services, is finally up and running and staffed and he believes it’s having a significant impact.

“Before it wasn’t having quite enough impact, in my opinion, as of early summer, so we did assign two members to be solely in the downtown core but that impacted our ability to respond to incidents in other parts of the city.”

He said city council’s adoption of the downtown enhancement package will allow the downtown safety until to maintain a presence in the downtown core without impacting other areas of the city.

Most of the calls the RCMP receives in the downtown area tend to be causing a disturbance, mental health, public intoxication, suspicious persons and mischief.

“The hospital is continuing to be an increasing area of concern for us with disturbances and unwanted persons,” said Wright.

“We’ve been working with them to try and implement some protocols but that means it’s just a sign of the times that we are going to get called there.”

“In British Columbia, we really have to have our investigations nearly fully complete by the time we send it forward for charge approval as opposed to provinces that continue to lay their own charges and have crown council review that,” explained Wright in response to a question posed by Coun. Kyle Sampson about what could be done to make policing more efficient.

“On us, there is a massive front end burden in a very short period of time.”

Wright also pointed out harm-reduction with the lack of treatment centre supports to be a challenge for policing.

“I don’t have an issue with harm reduction itself, however, there are a lot of agencies practicing harm reduction strategies without a real endgame and its really just perpetuating the situation, in my view, harm reduction should be accompanied by treatment and some sort of endgame goal to get that person out of that lifestyle.”

Lastly, Wright took the opportunity to comment on the proposed First Avenue integrated health and housing development, which would see housing, social and health supports for vulnerable populations in one building.

“Developments like that are really the missing middle piece. You can see our mental health statistics continue to go up because the people on the street have nowhere to go.”