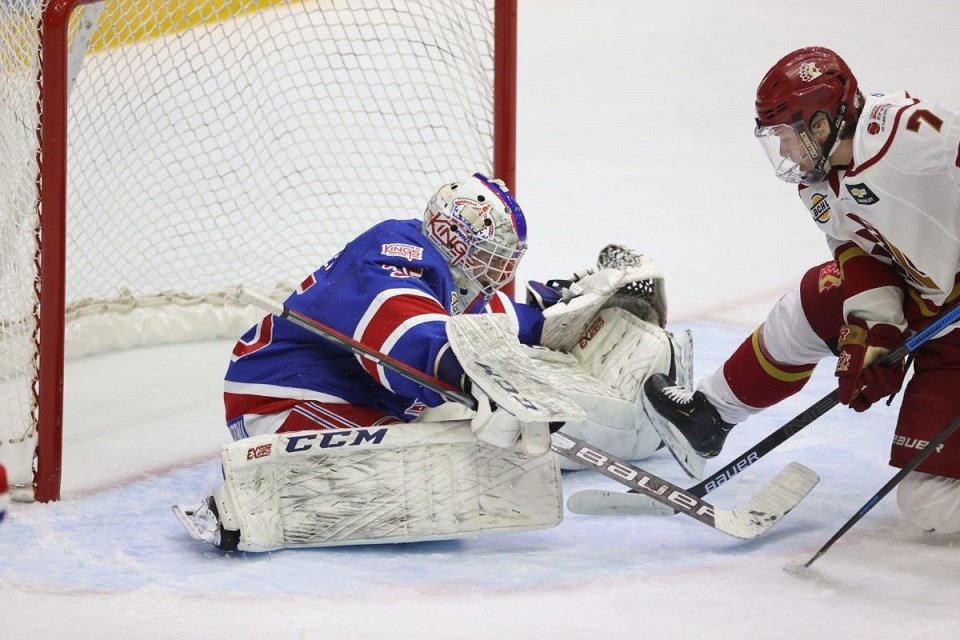 It was another tight-knit contest between Prince George and Chilliwack tonight (April 15).

However, the ice would tip in favour of the pod-host Chiefs, especially when it came to offensive opportunities that ulitmately led to a 2-0 win and kept the Spruce Kings off the scoresheet for a second time in three games.

Aaron Trotter earned himself a busy night in the cage for the red, white and blue, stopping 27 of 28 shots he faced; the final goal of the night was an empty-netter.

On the other side, Mathieu Caron was unbreakable when he turned aside 16 shots from Prince George for his second shutout of the 2020-21 campaign.

Both teams went scoreless on eight power-plays in the 60 minutes of regulation play, which included three chances for the Kings.

Chilliwack's first goal was a one-timer from the right side of Prince George's end with 4:08 left in the opening frame.

Ray Fust potted his third inside the pod after Sasha Teleguine passed it across the ice between the legs of Prince George defenceman Zach Gabruch.

The second period saw the Spruce Kings garner some opportunities, narrowly outshooting the Chiefs nine to eight, but Caron kept shutting the door.

The 2-0 insurance marker came with three ticks left in the contest after Head Coach Alex Evin pulled Trotter with 30 seconds left in hopes of overtime against their rivals.

Chiefs' Tanner Andrew picked up a loose puck in the neutral zone and picked up speed along the right boards and shot it towards the empty net for his team-leading fifth goal of the campaign.

The loss drops the Spruce Kings' record to 4-3, but remain two points back of Chilliwack with a game at hand.

They remain undefeated on the 20-game shortened season against the Centennials at 3-0, while also outscoring them 16-4.