All you need is love
Mar 19, 2020 8:35 PM By: Jess Balzer
Previous Next
1 / 1 The windows of homes and businesses in Prince George have put hearts in their windows to bring the community together. (via Jess Fedigan)
Expand
Previous Next

Even the smallest symbol can be the most powerful.

With the COVID-19 crisis isolating communities, including Prince George, it's a little harder to show love to those around you but one community resident came up with a way for people to show we're all in this together.

Bailey Grose says she saw a similar trend of items in windows when it came to St. Patricks Day (March 17).

"There had actually been a post going around getting people to put shamrocks in their window and I thought it would be a good idea to change it to hearts and use a hashtag related to Prince George," she tells PrinceGeorgeMatters.

"PG already has a rich history of coming together as a community during tough times."

That's when a social media post appeared from Grose, saying she thought it would be fun to have a community "Heart Hunt."

"No human contact. Get fresh air. Don’t buy toilet paper. Just put a heart in your window," her post read. 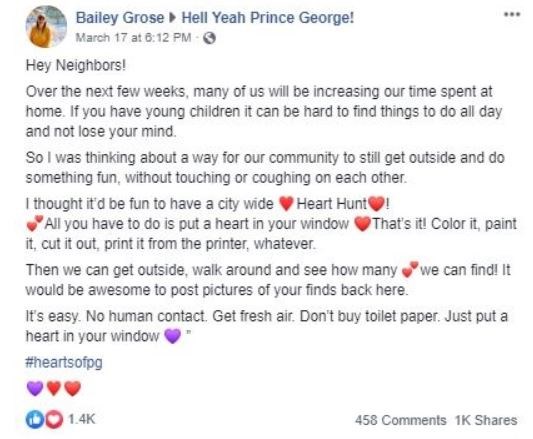 She says she understands that isolation will be tough for many people.

Not leaving your house when it's gorgeous outside and spring is just around the corner, for example.

"I hope people feel hopeful and happy," she says. "What we are going through is new and hard. It’s difficult feeling isolated and that we can not help. I hope people still feel connected doing this, that they are helping make an enjoyable bright memory for someone in a dark time."

While Grose says she didn't expect the movement to become this big, she's received messages from all over the country from places like Nova Scotia, Prince Albert and Port Alberni, to name a few.

But, one message stood out far more than the rest.

She received a message from someone in Vancouver, who said they saw her idea and went to the Lynn Valley Care Centre.

Sadly, seven deaths have occurred from COVID-19 at the centre.

But the user says they drew chalk hearts and flowers outside on the crosswalks, stemming from Grose's movement. 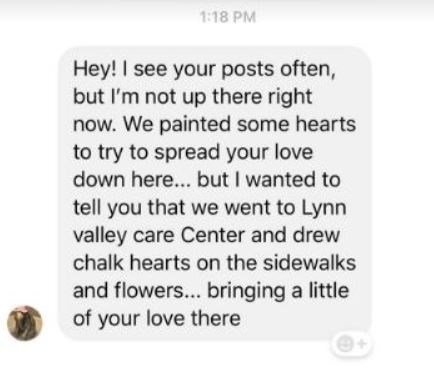 "The best one was this one [message]," Grose says.

So while we may feel alone, something as small as a paper heart in a window can remind us we never truly are.

We'll all get through this, together.