More than 11,200 mail-in ballots were requested and sent during the last B.C. election

The vote-by-mail option for the upcoming 2020 B.C. election in October has already gone through the roof... by 1,320 per cent to be exact.

Elections BC has announced as of Sept. 22 at 11:59 p.m., there have been 160,000 requests from provincial voters choosing the vote-by-mail option amid the COVID-19 pandemic.

These numbers do not reflect the number of total vote-by-mail packages issued to-date or the number of mail-in ballots that will be considered for counting, Elections BC says.

Some voters may not actually return their package by the deadline and all packages received must be screened before sent to be accepted.

During the 2017 provincial election, there were only 11,268 vote-by-mail ballots requested and just 6,517 returned and counted on time. Voting packages were available to voters on March 13 with voting day on May 9.

The voting day this year is scheduled for Oct. 24, just one month away.

Elections BC says the vote-by-mail request counts will be updated each day (Monday to Friday).

After weeks of rumours, B.C. Premier John Horgan officially called the snap-election on Monday (Sept. 21), announcing the election amid the ongoing COVID-19 pandemic and cases surging in British Columbia.

The BC Liberal and Green parties announced they were less than impressed with Horgan's decision, claiming Horgan only called the election for self-serving purposes and the lack of awareness of holding a provincial election during an ongoing pandemic.

Dr. Bonnie Henry and Elections BC outlined the voting protocols for the election that same day, which will see voting very different from 2017.

Voters must register by midnight on Saturday (Sept. 26). 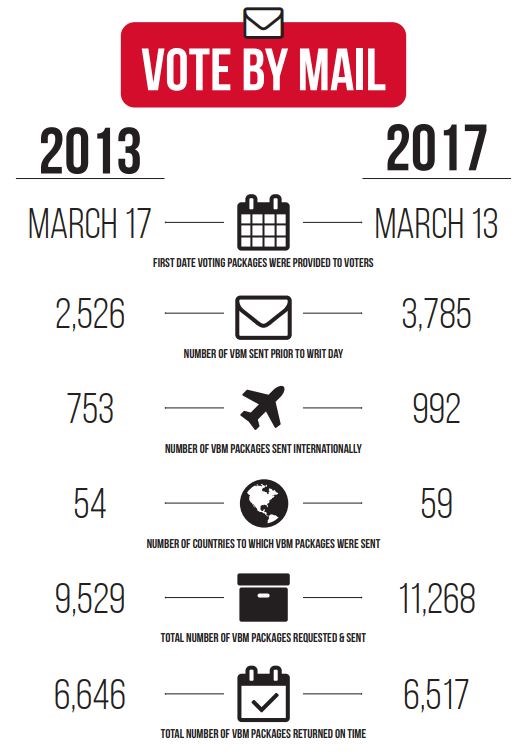 (via Elections BC)
Tags: