Stuart Parker has resigned as interim leader of the BC Ecosocialist and its Prince George-Valemount riding candidacy for the upcoming provincial election after numerous alleged transphobic comments.

Video posted online showed it had already been vandalized with paint—being plastered over, just one day after it went up.

Rowling, best known for the Harry Potter series, has been under immense scrutiny lately, accused of transphobia relating to gender and biological sex.

In December 2019, she faced backlash when she sent out a tweet defending a U.K. researcher who had allegedly lost her job after sharing her views of transgender people(s).

The researcher filed a discrimination suit, but didn't win.

Maya Forstataer tweeted "My belief as I set out in my witness statement is that sex is a biological fact and is immutable. There are two sexes. Men are male. Women are female. It is impossible to change sex. These were until very recently understood as basic facts of life."

In response, Rowling tweeted: "Dress however you please. Call yourself whatever you like. Sleep with any consenting adult who'll have you. Live your best life in peace and security. But force women out of their jobs for stating that sex is real?"

She came under further fire in June after doubling-down on that stance while criticizing an opinion piece that used the phrase “people who menstruate.”

“I’m sure they're used to be a word for those people," the famous British author tweeted at the time. "Someone help me out. Wumben? Wimpund? Woomud?”

She continued, “If sex isn’t real, there’s no same-sex attraction. If sex isn’t real, the lived reality of women globally is erased. I know and love trans people, but erasing the concept of sex removes the ability of many to meaningfully discuss their lives. It isn’t hate to speak the truth.”

Spurling said she knew many were friends with Graves, but she needed to post the interaction because it affected many around her.

“I know a lot of you are friends with Judy Graves so this may spark strong feelings,” Spurling wrote in her post. “I’ve seen her defend transphobia in the past, but I’d hoped that was simply a case of ignorance.

“Today she made it very clear that she supports transphobia by supporting the J.K. Rowling billboard and the people who paid for the ad.” 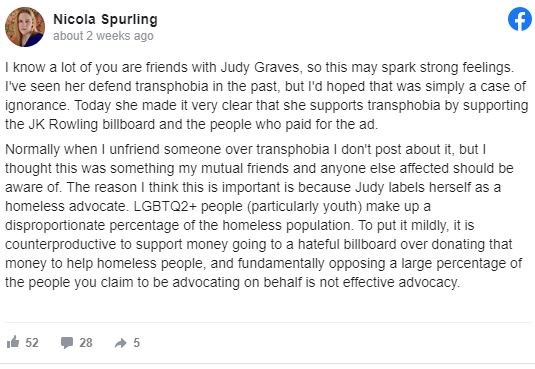 Spurling says she pointed out homeless individuals are disproportionately LGBTQ2+ and that homeless advocacy is not effective if you oppose who a significant portion of the people you claim to advocate on behalf of are.

That’s when Parker commented on Spurling’s post, seeming to allegedly defend Gravers and her views on Rowling.

In the Sept. 12 comment, Parker defends Rowling’s frequent comments, saying society has “a hair-trigger response to only using transition as the sole treatment of dysphasia when talk therapy has produced better results,” that transitioning people too often “sterilizes children” when other options are available, and that woman should have the right to create “single-gender” and “single-sex spaces.”

Parker ended his post with a call to "engage instead of cancelling" while also accusing Spurling and her friends of trying to get Graves fired over her different beliefs. 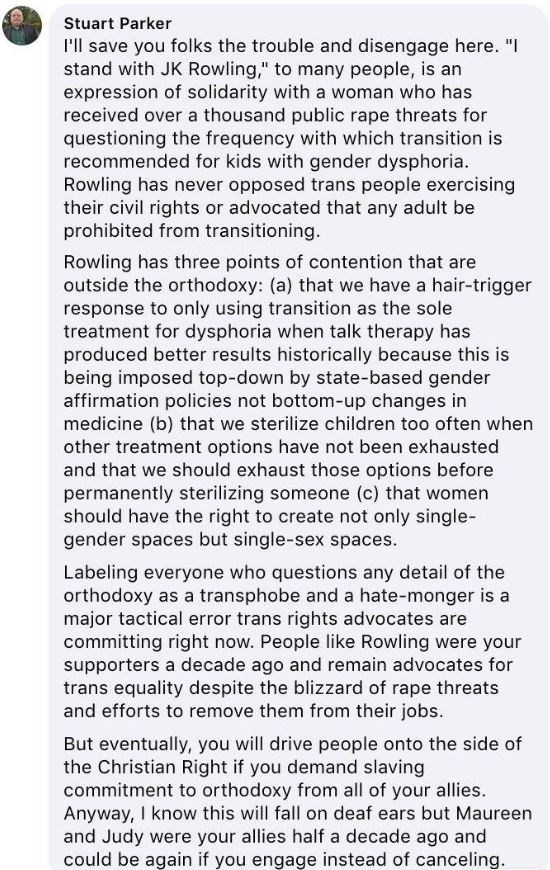 He believes others had ‘misinterpreted’ Graves’ statement.

“I intervened,” he told PrinceGeorgeMatters this morning (Sept. 23).

“I said I thought this was a real ‘tactical error’ that they’re misinterpreting what she [Graves] said about the J.K. Rowling situation and that they were reacting in a way that would push their allies away, rather than engaging with allies who substantially agreed with them about the need to protect and expand the rights of transgender people.”

Spurling tells PrinceGeorgeMatters she never called for anyone to be fired and has had previous conversations with Parker, but didn’t realize he was the interim leader of the BC Ecosocialist party until one of her friends announced she was running for the party.

Then, many other people came forward and shared more alleged instances in which conversations were had with Parker and involved more alleged transphobic comments.

“I never asked for Judy [Gravers] to be fired from her job. I'm not sure where Stuart got that idea,” Spurling said. “I pointed out that homeless individuals are disproportionately LGBTQ2+ and that homeless advocacy is not effective if you oppose who a significant portion of the people you claim to advocate on behalf of are.

“I don't understand why he felt the need to weigh in on the subject given his lack of understanding. His comments have no basis in fact, he was simply parroting JK Rowling's transphobic rhetoric. It wasn't just this comment that raised concerns around his transphobia, however. A number of trans people came forward on Twitter to recount conversations they'd had with him where he'd come across as transphobic and also shared excerpts from his blog posts that pushed anti-trans rhetoric.”

Spurling said she contacted federal Green candidate Meryam Haddad of Montreal — who recently endorsed the BC Ecosocialists after she was expelled from the federal Green race — imploring her to contact leadership apparatus.

“I have been made aware of transphobic comments from [Stuart Parker],” Tweeted Haddad Tuesday morning, using Parker’s Twitter handle. “I demanded Stuart apologize and resign. He refused. If BC Ecosocialists does not expel him, I will disavow them as well.”

Shortly after 10 p.m. yesterday, Stuart announced his resignation on his website saying the allegations were false.

"I see that B.C.’s two counterfeit left parties have chosen their strategy for derailing our campaign. A slew of false allegations of transphobia are being circulated against me and being used to tarnish the party and derail the important work of the coming campaign.

"So, it is with regret and reluctance that I am tendering my resignation as director, leader and candidate effective midnight tonight. I know, from the sterling group of young people who have joined our slate and our board over the past eleven months that I am leaving this party is excellent hands. You folks will do a great job and I will be proud to cast a vote for whomever the party selects in Prince George-Valemount.”

The provincial general election is slated for Saturday, Oct. 24.

- with files from Stefan Labbe, Tri-City News, and Megan Lalonde, Vancouver Is Awesome 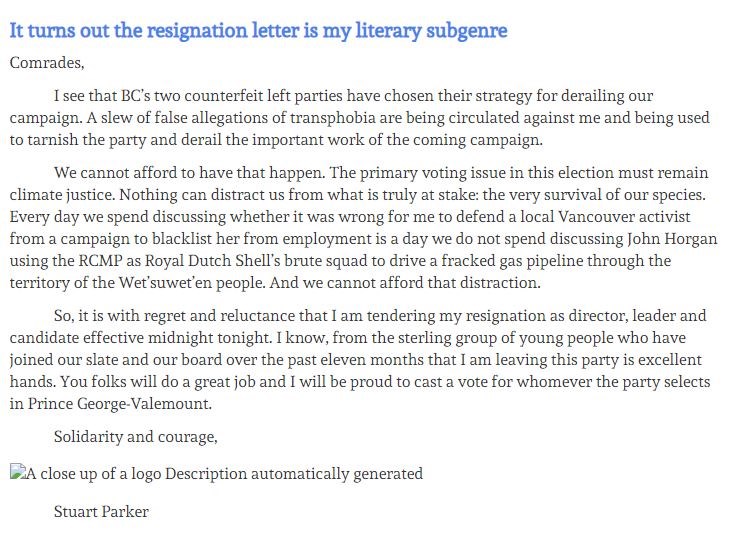