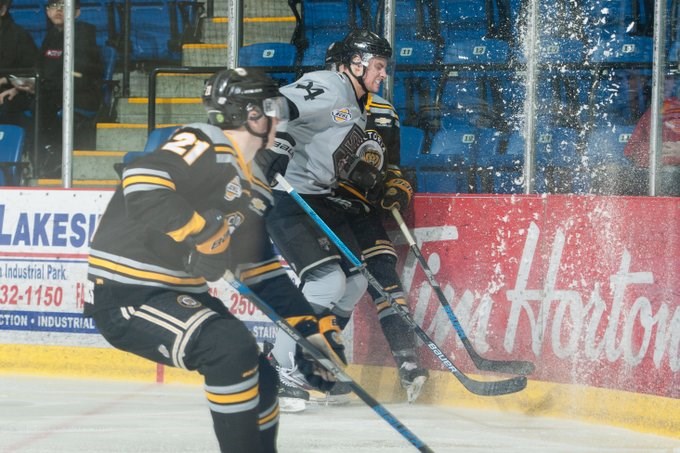 Zach Gabruch (#24) has been traded to the Prince George Spruce Kings. (via Salmon Arm Silverbacks)

Zach Gabruch was set to move across the country later this year to continue his junior ‘A’ hockey career in Ontario.

However, he’s set to stay in the B.C. for his sophomore season after the Prince George Spruce Kings acquired the 19-year-old today (June 25) from the Wellington Dukes in exchange for Mason Reeves.

Six days ago (June 19), Gabruch was traded to the Ontario franchise from the Salmon Arm Silverbacks, but Kings’ General Manager Mike Hawes believes the blue-liner was needed for the upcoming 2020-21 season.

“Zach is a good addition for us. He’s a big and mobile d-man with a year of experience in our league,”said Hawes of the six-foot-five product originally from Saskatoon.

“He will provide a lot of stability for us on the back end.”

Gabruch’s resume includes 83 regular-season games with his hometown-Saskatoon Blazers in Under-18 AAA play with 22 assists and 30 points in that span.

His team made it to the 2019 playoff final, but lost the best-of-five series to the Notre Dame Hounds.

Reeves came to Prince George 27 games into his 2019-20 campaign from the Brooks Bandits, part of a trade initially requested by Ryan McAllister in early January.

The forward completed his rookie year with a combined 11 points between the two clubs.