Robert Frost wrote the line "good fences make good neighbours" but by it actually meant the opposite. Human nature is at once compelled to impose lines of delineation but also pine for freedom of movement.
Jan 17, 2018 9:22 AM By: Frank Peebles 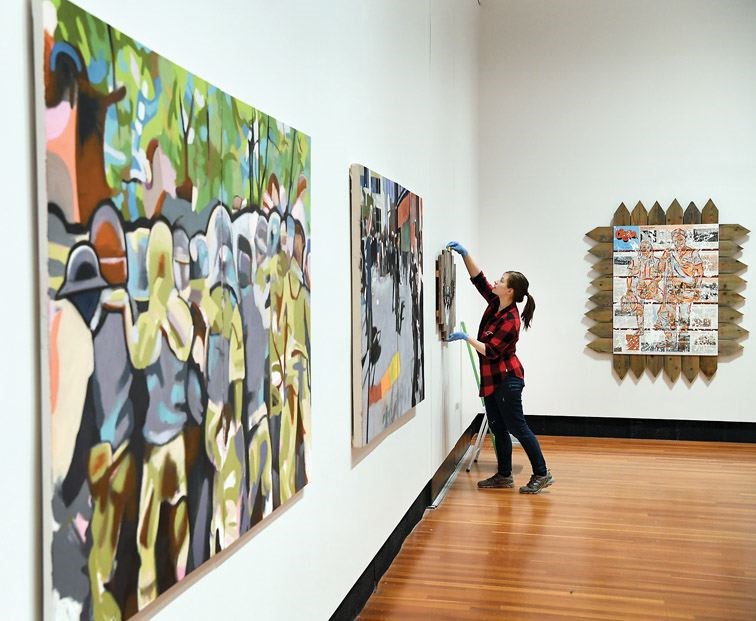 Robert Frost wrote the line "good fences make good neighbours" but by it actually meant the opposite.

Human nature is at once compelled to impose lines of delineation but also pine for freedom of movement. Walls, borders, baselines, hedgerows, boundaries, calendar dates, government policies, social norms, safety codes, all can be a form of fence and all are saturated with complex implications.

What a perfectly tensioned word - fence - to inspire an art exhibition. It was the operative theme but framed with the instruction for the participating artists to interpret the word as they saw fit.

The collected results are on the walls now inside the Two Rivers Gallery.

"The original idea came from our curator George Harris. He had been thinking about all the discussions in the media lately about walls and fences and borders," said assistant curator Meghan Hunter-Gauthier. "There's everything happening in the States, the Middle East, refugees, North Korea, so many big topics in world affairs have some kind of connection to the idea of fences. They can protect people, alienate people, cause people to flee, so much of our human existence comes down to some kind of boundary."

Ten B.C. artists had a go at it. Then they had another go at it. They were able to cross the lines of good taste, get out of their comfort zones, go where no thought had gone before and take their artists' tools with them. Each one of the participating artists was given multiple spaces within the Fences exhibition.

"It's quite a full show," said Hunter-Gauthier. "We have some large pieces, we have some multi-media pieces, everyone did multiple pieces, and they really seem to have crossed boundaries in their own lives and use these pieces to talk about that."

She said Babcock related a story to her about the creative process on this exhibition. Babcock was looking out the window of her home when an eagle landed on the backyard fence. It suddenly occurred to the artist that fences can separate things, fences can protect things, but fences aren't binary things - in or out, welcome or unwelcome - they are also irrelevant things to some forces in our lives. The eagle showed her that sometimes fences are just a good vantage point or place to rest a moment, for some in this world of borders both tangible and intangible.

"Reflected here are considerations of physical barriers, as well as those that are metaphoric, symbolic, social or political," said Hunter-Gauthier. "This exhibition considers boundaries that are politically charged, invisible, natural or that have come from within. Some of them are walls and fences with deeply negative connotations; others are well intended. While the abolition of certain kinds of fences would indeed be tremendously positive, the loss of others may be problematic."

An elder confined to an apartment, a Nazi victim held within a death camp, displaced refugees fleeing a homeland that's turned on them, climate change altering access to the Arctic, such are the topics depicted in the collection, plus many more besides.

The opening reception on Thursday - a shared event that also welcomes painter Mitchell Wiebe for his next door exhibition entitled Black Magic - is free of charge for the public to attend and includes refreshments and interaction with some of the artists involved. The event starts at 7:30 p.m.