The ultimate compliment to an athlete is that they were difficult to play against, game-in and game-out. In the case of UNBC men’s soccer great Gordon Hall, there may be no Timberwolf ever who was harder to compete against.
Mar 30, 2021 7:30 AM By: Prince George Citizen Staff 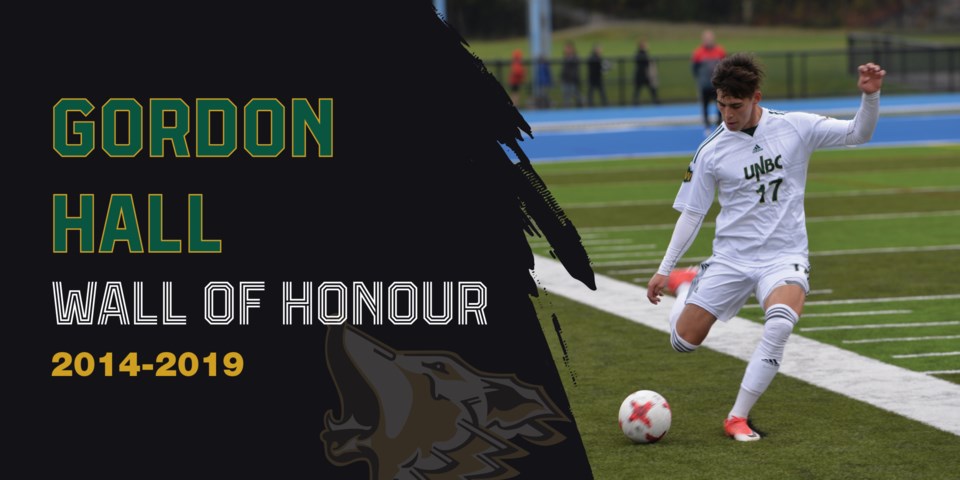 UNBC centre back Gordon Hall was the backbone of the Timberwolves' defence for five seasons from 2014-19. Hall joins a select few T-wolves athletes on the UNBC Wall of Honour.

The ultimate compliment to an athlete is that they were difficult to play against, game-in and game-out.

In the case of UNBC men’s soccer great Gordon Hall, there may be no Timberwolf ever who was harder to compete against. The heart and soul of the T-wolves’ backline over the course of a historic five-year career in green and gold, Hall is a hugely deserving inductee in the inaugural class of the Timberwolves Wall of Honour.

A product of the Abbotsford Mariners program in Fraser Valley, Hall graduated from Chilliwack Secondary School and made the move to the University of Fraser Valley. Due to injury, he was not active on the soccer roster, allowing him to make the move to any school and be eligible to play the game he had been so dominant at the youth level.

Alan Alderson was early in his tenure as head coach of the Timberwolves varsity program and was looking to build his roster on talent and tenacity. UNBC had been competing at the U SPORTS level for just two seasons and many of the holdovers from the collegiate ranks had graduated and moved on. He knew Hall from his time coaching the young defender at the U16 level, and identified him as a player and person who could alter the course of T-wolves soccer.

“Gordon was a terrific player. He absolutely oozed confidence and smoothness. Even at a young age, he never looked rattled and always seemed to be in the right place,” said Alderson. “He executed everything so smoothly. When we had the ball, he was great. When we didn’t have the ball, his ability to read the play was fantastic. Combined with his athleticism, he was remarkable. I remember asking my early signings about anyone they knew who was a great soccer player and a great human being. A bunch said “we need to get Gordon Hall.”

Alderson was able to convince Hall to make the move to Prince George along with three other recruits from the Fraser Valley area - Conrad Rowlands, Josh McAvoy, and Brandon Wallace.

The 2014-2015 campaign was a bumpy one for the T-wolves as many of the young recruits were pressed into action and had to learn the ways of Canadian university sport the hard way. Of all those first- and second-years, it was the freshman centre back who stepped up most. It didn’t take long for Hall to establish himself as the type of defender that opposing strikers would be weary of attacking. He started 10 games in his rookie year and established himself as a UNBC cornerstone.

“I hadn’t forgotten how much I loved having Gordon on my team, because of who he was as a player and a person,” said Alderson. “He was a leader. He led by example, and he made those around him better. He had a wry smile and sense of humour which made the young players feel relaxed and confident. Even then, he really was good at helping everyone perform at their very best.”

Prior to the 2015 Canada West season Alderson moved on to new opportunities and Steve Simonson was hired just one week prior to opening day as his replacement. That tight timeline left little wiggle room for implementation of tactics or a new outlook so the new bench boss would have to learn his players’ strengths and motivations on the fly. Jesse Rake was a Timberwolves freshman that season and pointed to Hall’s willingness to step up and lead as a major asset to the program.

“Gord was more of a behind-the-scenes leader, but he always made sure you knew it was okay to push yourself beyond your limits and fail,” said Rake. “If you messed something up, which he basically never did, he would help you with what went wrong and then encourage you to move forward and try it again. I really think of Gord as the ideal teammate.”

The Timberwolves, predictably, went through some growing pains that season, having to adapt to a new direction on short notice. But, again, through it all, Hall was a standout. His fiery competitiveness was a constant example and standard for his teammates to follow and word was getting out; if you wanted to take on the T-wolves, Gordon Hall was not going to make it easy on you. At the conclusion of the season, the Chilliwack product was named UNBC Best Defensive Player and Most Valuable Player.

In 2016-2017, the Timberwolves took major strides towards the type of team Simonson envisioned. They set program marks for goals scored, and wins, and continued to establish themselves as one of the toughest teams to compete within the conference. This was particularly true of the backline, where the third-year Hall was putting his stamp on the team – and on opposing forwards.

One of the opposing forwards was Canada West All-Star Ryan Glanville, who starred for the Thompson Rivers University WolfPack. The physicality between Glanville and Hall became appointment viewing, and their competitiveness was rivaled only by their respect for one another.

“Gordon never made life easy on any strikers he lined up against in Canada West,” said Glanville. “His compete level was one of the highest in the conference. Strikers like me never really enjoyed that. It led to some incredible battles over the years in the midst of playoff races. After the first few yellow cards were out of the way, there was a ton of respect. He is a true competitor and I haven’t lost any sleep not having to match up against Gordon Hall anymore.”

Hall was named UNBC’s Best Defensive Player that season, and earned the distinction of becoming the first T-wolves soccer player to be named a Canada West All-Star, garnering a second team spot.

In Hall’s fourth season, it fell into place for the Timberwolves. Anchored by their Canada West All-Star, the backline was bolstered by Rowlands and young defender Cody Gysbers, leading to tremendous results. The T-wolves cut their goals against in half from the previous season, from 34 to 17, leading to program records for wins, points, and goals surrendered. Most importantly, Hall and the Timberwolves made UNBC history, qualifying for the Canada West playoffs for the first time.

Hall further bolstered his trophy case that year, winning Timberwolves Most Valuable Player, UNBC Male Athlete of the Year, and becoming the first T-wolf to twice be named a Canada West All-Star.

“Gord’s incredible technical skill was so apparent. His touch was always sharp. He could hit the ball, and he was always seeing plays develop before anyone else,” said Rake. “He was so important to the culture that Coach Steve was trying to build. It wouldn’t be anywhere near what it is, if not for Gordon. He was the best defender in Canada West, but also an incredible team-builder.”

In his senior season, Hall continued to dominate the TWolves’ third. The program reached a new milestone, going 6-4-5, earning the first winning season since joining the university ranks. The fifth-year defender was able to play his signature physical style, but was as disciplined and measured as he had ever been in his soccer career. He was named Timberwolves Best Defensive Player, MVP, UNBC Male Athlete of the Year. The coaches around the conference took notice, as well, naming him a First Team All-Star, making Hall the first Timberwolf to earn the distinction. He also became the first UNBC student-athlete be named a conference all-star three times.

“Gordon was a competitor on the pitch, and really one of the top defenders in Canada West,” said Simonson. “By that fifth year, he had earned so much respect. It is no coincidence that our improvement as a team coincided with his growth as a player. He really did raise the confidence of every single player around him with his consistent performance. Gordon’s personal growth over the five years was immense, and the program is undoubtedly better because of his involvement.”

Despite playing center back and focusing on his own end of the pitch, Hall’s name is scattered all over the T-wolves’ record books. He concluded his career top-10 in games played and starts in a UNBC kit, and managed to finish top-20 in goals and points.

After his soccer career concluded, Hall graduated from UNBC with a degree in natural resources and environmental studies. He still calls Prince George home, and can be found at Timberwolves training. Unsurprisingly, he is there to make those around him better, just as he improved Timberwolves Athletics over the course of a historic five-year career.

“Gord was the best center back in Canada West, and I would argue he was the best in the country,” said Hall’s UNBC teammate Owen Stewart. “He made us so much better. But, just as important as that was his ability to nurture the younger plyers and help them develop. Anyone who played with him would tell you about his kindness to everyone he meets. He deserves this so much. He will forever be a face of the UNBC Timberwolves.”