7,586 kilometres. That’s how far Katharina Weltz, the newest member of the UNBC Timberwolves women’s soccer team, will travel from Germany to Prince George this summer to prepare for the upcoming Canada West season.
Apr 11, 2021 1:14 PM By: Prince George Citizen Staff 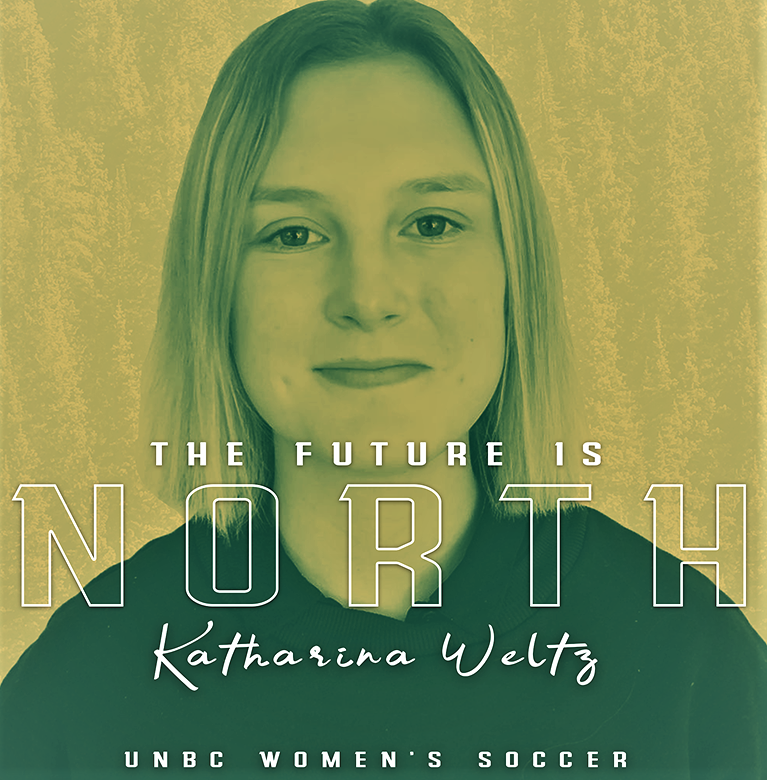 That’s how far Katharina Weltz, the newest member of the UNBC Timberwolves women’s soccer team, will travel from Germany to Prince George this summer to prepare for the upcoming Canada West season.

“I am so excited to go to UNBC,” said Weltz. “It means a lot to me that I am able to take such a big step after school. It’s not only the distance; it’s also the athletic level. I am so thankful that I have been given this opportunity. I can’t believe I am able to play the highest level of university sport in Canada in a few months.”

A native of Leipzig, a city of 600,000, Weltz knew she wanted to go as far as she could with the game she loves. Upon learning of the small university in northern B.C., she made contact with Timberwolves coach Neil Sedgwick. Over the next few months, they stayed in touch, discussing all UNBC could offer the talented German academically, culturally, and athletically.

“I chose UNBC because I thought it would suit me best,” she said. “I like that it is a small university, because I think it will make it easier. When I talked to Neil, I immediately had the feeling this team would be the right choice for me. He told me how they play and how I would fit in. He was really kind and supportive of all my questions.”

Most often playing in the midfield, Weltz grew up playing in female leagues and male leagues. Standing five-foot-nine, she has the physical frame to make an impact at the Canada West level, and the training and skills to immediately contribute to the T-wolves.

“I play midfield, so most of my tasks were to distribute the ball, play it into the gaps, and shooting every once in a while,” said Weltz. “I played with boys until I was 17, so I hope I bring some physical strength with me. But I know there is always room for improvement, and I hope to get that from Neil and the team.”

Sedgwick has been navigating a recruiting season unlike any other, unable to visit players or welcome potential players to identification camps. The opportunity to add a player with the potential profile of Weltz was too good to pass up. The UNBC bench boss suggests the newest Timberwolf will benefit from her experience with the program, but so will her new teammates.

“This is a really exciting day for us,” said Sedgwick. “As a first-year player, Katharina brings with her a great deal of experience. Being from a different culture will add a different dimension both on and off the field. From watching her play, I have been impressed with her balance and ability to read the key moments of the game. In getting to know Katharina, it is clear that she is keen to continue her development here at UNBC, and we are thrilled to have her.”

A member of FC Phoenix Leipzig, the 19-year-old has climbed the ranks and feels prepared to play at the highest level of university soccer in Canada. She understands there will be an adjustment, both physically and tactically, but Weltz is thrilled for the opportunity.

“It’s everything in combination I am excited about,” she said. “The new team, meeting new people, going to university, and the first time going far away from home. I hope I can find my place on the team and in the university. I am hoping to get good insights in my first year, and I hope to play regularly in the next years.”

A graduate of Geschwister-Scholl-Gymnasium Leipzig, Weltz will arrive in Prince George in August. She plans to study psychology at UNBC, and continue a soccer journey that began when she was just six years old.