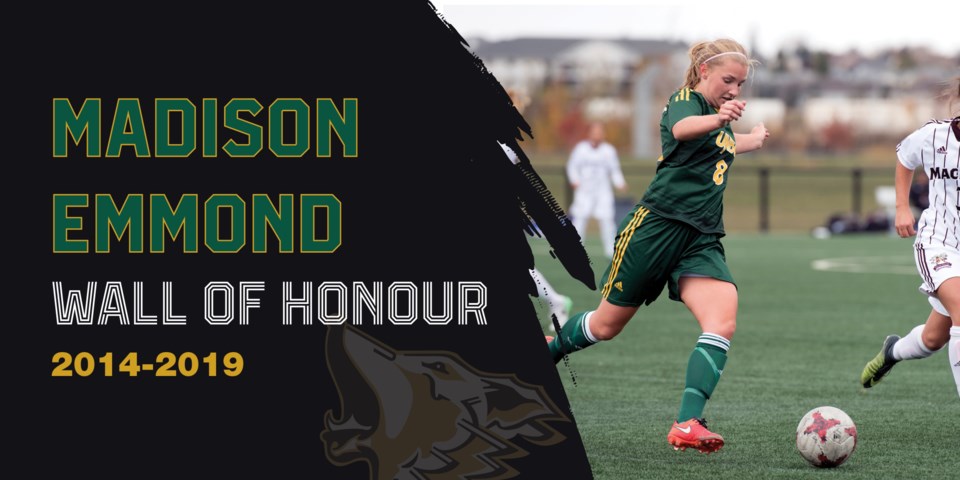 Prince George Youth Soccer product Madison Emmond has been selected for UNBC Wall of Honour for her career contributions to the Timberwolves soccer program.

Born and raised in Prince George, Emmond rose through the ranks of the PG Youth Soccer Association, concluding her youth career by earning the 2014 PGYSA Soccer Girl of the Year. She was recruited by Timberwolves coach Andy Cameron, and joined a team that had won a single game over the previous two Canada West seasons.

That didn’t deter the Kelly Road Secondary School graduate, who started nine games in the midfield in her freshman season. The Timberwolves again found themselves towards the bottom of the conference standings, but Emmond displayed her signature commitment and work ethic in her rookie campaign. Fellow first-year Kylie Erb, who would play five seasons alongside Emmond, said her teammate’s commitment was obvious from the beginning.

“She is so incredibly committed. Mads is one of the hardest working players I have ever played with,” said Erb. “Right away, she was a leader on and off the field. She worked so hard and always wanted the best for everyone. She out her heart and soul into being a Timberwolf.”

Year 2 was another season of growth for the Timberwolves. Emmond started twelve games and saw an increase in her assertiveness and on-ball play. She saw an uptick in minutes, shots, and points, as the T-wolves prepared for a future without a group of graduating veterans who had become synonymous with the program.

In February of 2016, Neil Sedgwick was hired as the new head coach of the Timberwolves, bringing with him a new style of play and approach to the game. That suited Emmond perfectly, and Sedgwick identified the hometown midfielder as a potential building block for what he wanted the team to strive towards.

“She was immediately open, committed, and insightful. She was ready for messaging, which helped her performance as an individual and within the team,” said Sedgwick. “She demonstrated a true commitment to her personal development and that of the program. Her approach was incredibly important to where we were going as a team.”

After a growing season as the team adjusted to a completely new style under Sedgwick, something clicked with Emmond prior to the 2017-2018 season. Her attitude and development had solidified her as the leader of the team, and the Timberwolves were primed for a historic year.

The Timberwolves set new program records for wins, points, goals for, goals against, and qualified for the Canada West for the first time in program history. Emmond started every game, and spent less than 30 minutes on the bench the entire season, and was named the team’s Green & Gold Award winner. What stood out on the pitch was her ability to distribute the ball and place it accurately at the feet of her teammates. Emmond’s passing accuracy and decision making was critical in the T-wolves keeping possession, while also creating scoring opportunities.

“Madison was an extraordinary playmaker, who could make a pass or the setup to a goal seem effortless,” said Emmond’s UNBC teammate Paige Payne. “There is no doubt she was the heart of our team on and of the pitch. She was willing to do anything for her teammates. Mads is, hands down, one of the most gifted players I have ever played with. “

Emmond saved the best for last. In the 2018-2019 season, the Timberwolves again set new program marks for goals for, goals against, wins, and points, led by their senior captain. The fifth-year started all 14 games, and played every second of every game for UNBC, setting new career highs in goals, assists, points, and shots. The T-wolves qualified for their second consecutive Canada West playoffs, and made more history there, beating the Manitoba Bisons in penalty kicks to earn the program’s first conference playoff win. Who made good in the first round of the PK’s? None other than Emmond, who had taken the long and bumpy road with the T-wolves to get to that very moment.

“Madison demonstrated the grit that took the program to the next level,” said Sedgwick, of the 2018-2019 UNBC Most Valuable Player. “She is homegrown, and every single day she demonstrated that she wanted her university to be put on the map in university soccer. On the field, she was perhaps the best passer I have ever worked with. That doesn’t come easily or quickly. She was relentless in her learning, and it paid off.”

Emmond concluded her Timberwolves career top five in goals, assists, points, shots, and minutes, while ranking first all-time in games. Her 67 games were top 20 in the history of the Canada West conference. After finishing her playing career, she joined the UNBC coaching staff, where she works with the next generation of T-wolves.

From winless seasons, to emerging as the program’s heartbeat and leading the Timberwolves to historic results, perhaps the most qualified to describe Emmond’s impact on UNBC soccer is one of the players she suited up with in green and gold.

“What a legacy. She changed the community with her hard work and dedication,” said Payne. “It is truly amazing that a Prince George product was able to represent her hometown with such honour. There is no player who wore the Timberwolf logo with such pride. She deserves to be forever on the Wall of Honour.”