The bog was full of saltwater, and from it Hank has emerged. Saltwater Hank is the solo project about to launch from the former band Black Spruce Bog.
Jan 19, 2018 3:46 PM By: Frank Peebles 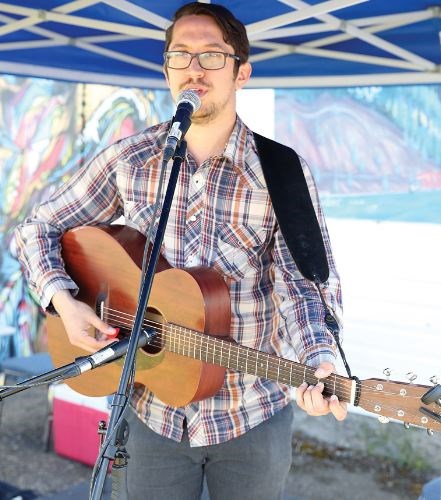 The bog was full of saltwater, and from it Hank has emerged.

Saltwater Hank is the solo project about to launch from the former band Black Spruce Bog. It is the musical alter ego of Jeremy Pahl, one of the singer-songwriter-instrumentalists that populated the beloved northern B.C. band that went dormant last year. Saltwater Hank is the first of the five bandmates to formulate a followup album. It is due out this spring, and right now is the window for fans to invest in the project.

A crowd-sourcing funding campaign is underway to get the eight-song package across the finish line. It is already most of the way there, the all-important recording process is done, but there are some financial hurdles before any album can hit the streets.

"The album is going to be titled Stories From The Northwest," said Pahl. "I ended up coming up with something that literal and to the point because all the songs I've been writing are about the history of northern B.C., people's struggles in this area, settler history and indigenous history, all of that nature. Sonically, it sounds pretty old-time with influences of bluegrass and old style country - the best kind, not the pop country, I stay away from that."

Pahl's affinity for traditional instruments and composition styles was a sleek fit with the rootsy alt-rock of Black Spruce Bog. It was one of the reasons the fans drank that band in so deeply. The band went defunct due to lifestyle choices among the band members, not any kind of musical differences, so those stylings of Pahl's are still flourishing and he is getting plenty of help in his new endeavour by other Black Spruce Bog alumni, plus others. For the first time in a lot of years, he was in the studio recording new music with an unpredictable array of other musicians.

"It's kind of nice," he said, thinking about all the new players in his midst. "Collaboration with a set band is great for many reasons, but producing a solo record is liberating. It's also vulnerable. All the decisions are done by me, so if it turns out to be a good decision or not such a good decision, the ownership is all on me. That's nice, I guess, but it has its daunting side."

He called on some well known local musicians to join the Stories From The Northwest community. Vocal harmonies were provided by Naomi Kavka, Amy Blanding and Danny Bell who also added drumming. Some banjo and lap steel picking came from Blake "Big Fancy" Bamford, Brin Porter on upright bass, Chloe Nakahara on fiddle, and the sole out of town guest was Simone Schmidt from Toronto adding some vocals on the song Old Hazelton.

The mastering of the tracks is being done by Williams Lake musician Brandon Hoffman (aka Blocktreat).

"It turned out to be quite the all-star group of friends," said Pahl.

He gave them all a unique experience. Unlike most recording sessions, the musicians were not brought in one by one for isolated contributions. Everyone performed their parts together. The challenge with that is arranging them properly in the room. Microphones hear differently than ears.

"Black Spruce Bog had two live-off-the floor albums, and I like that live feel, so we recorded the album using one mic, a ribbon mic, and everyone playing around it straight to a reel-to-reel tape recorder I picked up," he said. "The songs definitely sound like they weren't recorded in 2018, that's for sure. I've always wanted to try analogue so this was the perfect excuse to do it. And the only overdub was Simone's one vocal from Toronto. Everyone else played together. There was some interesting hurdles with that, like having Blake 20 feet away and a little off-angle, Brin was halfway between Blake and I, I had to be closer to the mic. That took a lot of experimenting, to get the positioning right. We did all this in the basement of Knox United Church."

He hopes to have the finished album in his hands by March. He is arranging a tour for April, including a date (still to be determined) in Prince George for the primary launch party.

First, he has to pay some of the bills of the project. To help that out, a Kickstarter link is live at the www.saltwaterhank.com website so people can pre-order and inject that important cash. It is a limited duration crowd-sourcing link so the clicks have to come in as soon as possible. Pahl is a full-time career musician, so any pre-orders for the album directly support his livelihood.