Gordon Coyle rides an iron horse, pulls the trigger of his lens and shutter, and like every lonesome cowboy he also has some sad songs. Coyle is a photographer, and he rolls proudly from scene to scene on his Harley.
Jul 6, 2018 9:41 AM By: Frank Peebles 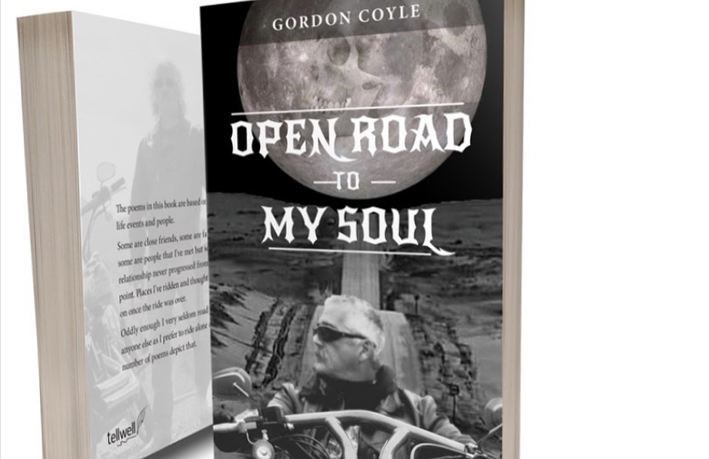 Gordon Coyle rides an iron horse, pulls the trigger of his lens and shutter, and like every lonesome cowboy he also has some sad songs.

Coyle is a photographer, and he rolls proudly from scene to scene on his Harley. The camera is one medium for his creative heart but he also puts pen to paper and arranges his impressions into structured words. He perhaps hesitated to call himself a poet, but now it's irrefutable. He has the book to prove it.

Coyle is the author of Open Road To My Soul: Biker Poems published this spring through Tellwell Talent in e-book, hardcover and paperback formats. He was born in Prince Rupert, raised in Lillooet, and has ties to Prince George. He will be at Books & Company on Saturday to meet the public, introduce the book, and sign his name on your own Open Road.

"The poems in this book are based on real life events and people," Coyle said. "Some are close friends, some are family, some are people that I've met but whose relationship never progressed from that point. Places I've ridden and thought back on once the ride was over. Oddly enough I very seldom rode with anyone else as I prefer to ride alone and a number of poems depict that."

He writes in the traditional style of rhymes and verses. The topics get painted with words under titles like Tattoos And Kisses and Homesick For Places I've Yet To See.

As a photographer, he has collections in various styles like portrait and sports and landscape but as a traveller he has one clear favourite way to go. He is a biker, starting from a young age. The Lillooet landscape makes for "exhilarating, winding highways through the Coast Mountains," he said, and after a year of working for BC Rail at the age of 15 he spent his earnings on a Honda he shared with his brothers.

It was one of many bikes he would own over the years, only putting the two-wheel passions on hold to raise his family while he worked in the mining industry.

In 2007 he said he finally "knocked off the biggest item" on his bucket list. It was shiny. It was new. It was a Softail - his first Harley Davidson. In the 11 years since, he said, he has " taken that bike as far east as the Atlantic coast of Nova Scotia, as far south as Arizona, and as far south east as North Carolina."

He was getting some miles on the bike and on the self. He had been writing poetry foryears, posting some of it online and keeping some of it in more private places. He had another item on that bucket list, and it was having two covers to put those verses between. He wanted to get them collected into a book "as a legacy project for my grandkids, in case I'm not around to see them become adults."

Now those poems are out on an open road of their own.