Indoor soccer season wraps up Saturday with playoff finals at the Northern Sport Centre and the outdoor fields are already green, weeks ahead of schedule.
Apr 21, 2016 9:46 PM By: Ted Clarke 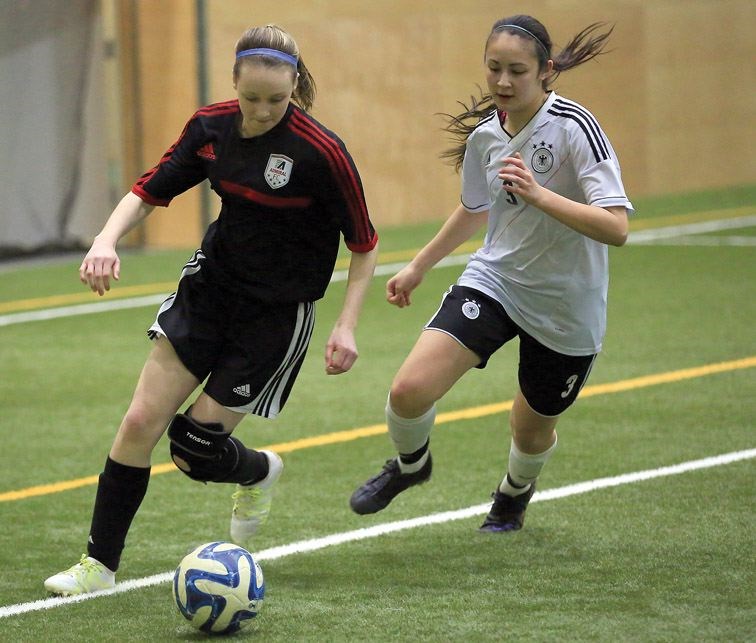 Admiral Roofings Whitney Anderson (black) tries to keep the ball away from Subways Kyra Teetzen (white) on Sunday at Northern Sport Centre. The two teams met in the A final of the Competitive Division of the BC Indoor Soccer League women's tournament. Citizen Photo by James Doyle January 24, 2016James Doyle, Photographer

Indoor soccer season wraps up Saturday with playoff finals at the Northern Sport Centre and the outdoor fields are already green, weeks ahead of schedule.

By this time next month, the Prince George Women's Soccer Association's outdoor season will be in full swing with games in two divisions, not three.

Plans to start a new division for the over-30 crowd were scrapped when the concept failed to convince enough players to make the switch from the recreational division.

"People aren't ready for that one quite yet," said league spokesperson Michele David. "We had two teams for sure, and two or three who were on the fence."

The Rec Division will have nine teams this year and the Open Division will be a seven-team division. David said there's a chance some teams might amalgamate before the season starts.

Registration is available online on the league website until the beginning of May.

League games start Monday, May. 16, following on the heels of the icebreaker tournament May 14-15. Each team will play 20 games in a season which wraps up the first week of September.

"We usually start on the May long weekend, so that's about a week earlier," said David.

The women's league and the North Cariboo Senior Soccer League (NCSSL) will team up to offer a drop-in co-ed league for games Friday nights starting May 27 and continuing each Friday except on long weekends until Aug. 26. Co-ed games are free to members of the PGWSA and NCSSL and the season fee is $50 for non-members.

The PGWSA is also planning a seven-a-side tournament in June. A traveling team from Prince George will compete in an over-40 tournament in Vernon, May 20-23.

"I think it will just be a mixture of select players or those of us that are silly enough to think we ca play three of four game and still walk the next day," said David, a veteran defender for Forest Power Sports, which competes in the Open Division.

The women's league team managers will gather at the NCSSL clubhouse on Sunday, May 1 at 4 p.m. for the annual draft of graduating players from the Prince George Youth Soccer Association.

Women's indoor final games are scheduled for Saturday at 1 and 2 p.m. at the Northern Sport Centre. The men's final will also be played at 1, also in the NSC fieldhouse.

Co-ed Division playoffs are set for today and Saturday. Finals will be played Saturday at 3 and 4 p.m.