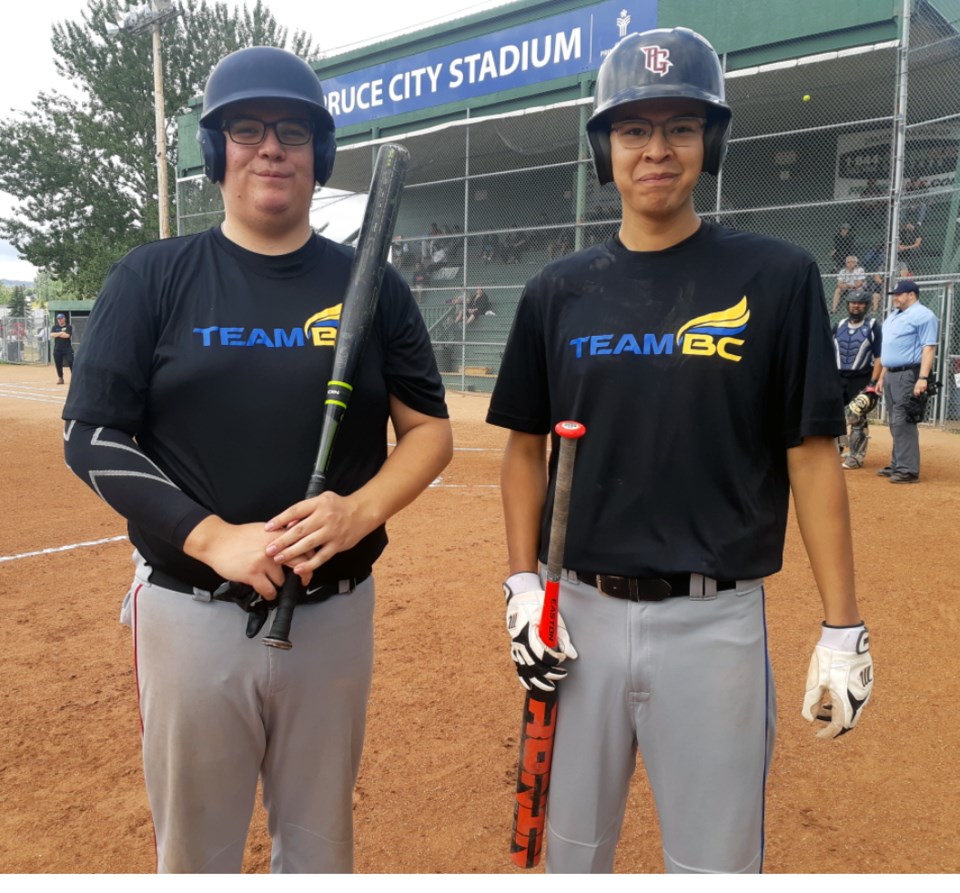 Team B.C. members, from left, Kaelon Gibbs and Richard French, get together in the on-deck circle at Spruce City Stadium before their game Saturday against the Spruce City Selects in the Spruce City Men's Fastball Tournament. Ted Clarke

Niagara Falls is one of Canada’s most famous tourist attractions and people from all over the world come to visit the Ontario city.

Watching those waterfalls and whirlpools will most certainly be on the itinerary for fastball players Kaelon Gibbs, Richard French and Derian Potskin, but they’re not going there to sight-see. They plan to be representing their province and Prince George next summer at the Canada Summer Games.

Al three grew up playing baseball and they've all celebrated provincial championships with the powerhouse Knights rep teams but are relative newcomers to fastball. French started playing four years ago, while this is only the second season of fastball for Gibbs. Potskin, a Team B.C. baseball player in 2018, took up fastball when he was 15.

“I’m very pumped about it, I’m excited, It’s definitely going to be something new, because I’m new to fastball,” said the 20-year-old French. “There’s going to be some talent on this team, Kaelon and Derian are really good.”

“I played hardball for the Knights on the midget team and we won provincials five times. I’ve played for the River Kings (traveling fastball team) a few times. It’s definitely a lot faster than hardball.”

This weekend at Spruce City Stadium Gibbs and French are getting their swings in playing with their B.C. Under-21 teammates on their home diamond in the six-team Spruce City Men’s Icebreaker Tournament. Potskin was out of town fishing with his father Evan and was not available to play in the tournament.

Gibbs was slotted second in the batting order behind French to allow Team BC head coach Phil Ransome to get as many chances as possible this weekend to see what they’re both capable of with their bats.

“Canada Games will be a good experience, a lot of fun, hopefully I’ll make the team so I’ll come out here and do my best,” said the 20-year-old Gibbs. “I’ve had just a year of fastball but I played baseball since in mosquito. It is weird seeing (pitches) from the hip instead of over the top. There’s a lot of hot shots at first base, it’s definitely a lot closer.”

Ransome is based in Barriere and he’s assembled a group of 18 players, including five from northern B.C., that will form the core of the team heading to Niagara Falls for the Canada Games tournament, Aug. 14-21, 2022.

“Right now we have 18 long-list athletes, we’ll probably take 15,” said Ransome. “This weekend Kaelon and Richard are out playing with us and we’re going to come in two weeks and do it again (at the 20-team John Cho Tournament, July 30-Aug.1).

Also on the B.C. team are Terrace products Will Edmonds and Ty Giesbrecht as well as players from Richmond, Bariere, Chase and West Kelowna. French, 20, is the highest third baseman in the provincial pool, while Gibbs has the first base position pretty much sewn up. The 19-year-old Potskin can play several positions and his bat is top-notch among his age-group peers and has a good chance of being slotted in the cleanup spot.

“They’re the best U-21 fastball players in British Columbia that will bother to come out,” said Ransome. “There are others out there I know but they’re doing other things.”

B.C. went 2-7 at the most recent Canada Summer Games tournament in 2017 in Winnipeg and Nicholas Potskin represented Prince George on the team that year. He figures they’ll be tough trying to knock off the expected powerhouses – Ontario, Saskatchewan and Nova Scotia.

The team has already played in the Kelowna men’s league Father’s Day tournament and they’re entered in the men’s C and D provincial championship, Aug. 20-22. They want to go to the Rawlings U-23 Shootout in Saskatoon later this summer but the cost of funding a trip that far is a challenge the provincial team has yet to overcome.

The first final in the triple-knockout tournament is scheduled for noon on Sunday at Spruce City Stadium. Go to the Spruce City Men’s Fastball site on Facebook for score updates.