Spruce Kings give up late lead, lose in shootout

Aaron Trotter was less than four minutes away from sealing his second career B.C. Hockey League shutout. Or so it seemed.
Apr 18, 2021 8:29 PM By: Ted Clarke 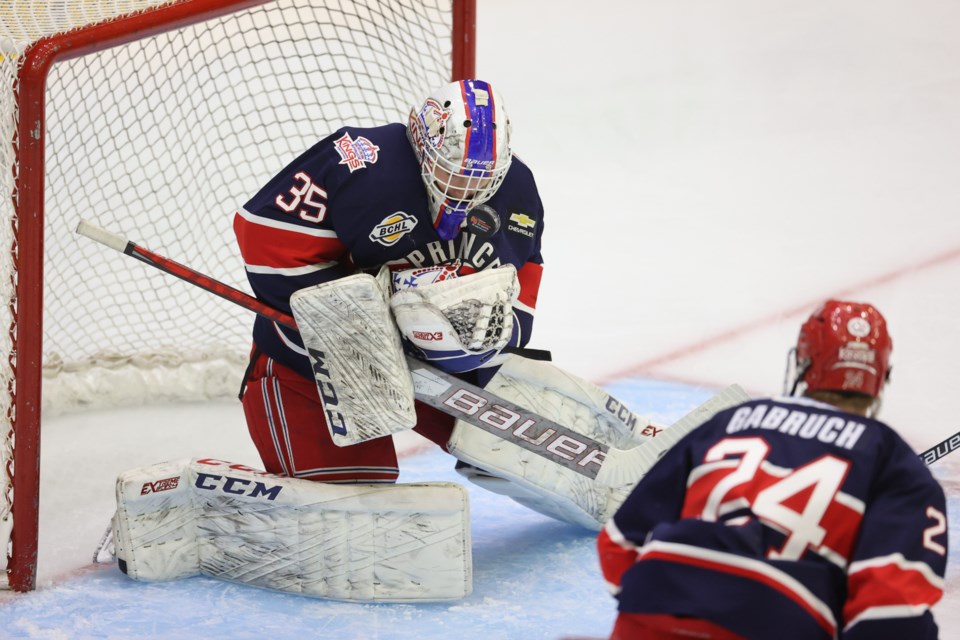 Spruce Kings goalie Aaron Trotter makes one of his 27 saves during Sunday's BCHL game against the Chilliwack Chiefs at Chilliwack Coliseum, while defenceman Zach Gabruch looks on. The Chiefs rallied to a 3-2 shootout victory.Garrett James photo

Or so it seemed.

For nearly three periods the 20-year-old first-year junior netminder from Victoria held the Chilliwack Chiefs off the scoreboard Sunday night at Chilliwack Coliseum.

But instead of going into an airtight defensive shell, his Prince George Spruce Kings teammates started to crack under the pressure. They couldn’t get the puck out of their end of the rink and the Chiefs took advantage, scoring twice in that final four minutes to force overtime, setting the stage for Sasha Teleguine’s decisive deke in the shootout to cinch a 3-2 Chilliwack victory.

It was a staggering collapse for the Spruce Kings, who seemed to have this game locked away.

The Chiefs made their push with about seven minutes left in regulation. Down 2-0, they forced Trotter to come up with difficult saves and the Victoria native could not be blamed when, 3:42 left on the clock, Trevor Longo dragged the puck through the crease and scored on a backhander to cut the gap to 2-1.

Then with less than two minutes left and Kings captain Mason Waite serving a boarding penalty, the Chiefs got goalie Mathieu Caron to the bench to create a 6-on-4 situation and Tanner Andrew utilized the advantage, launching a wrist shot in under Trotter’s arm for the tying goal with 1:50 left.

Overtime failed to produce a shot of goal at either end and Teleguine scored the only goal of the shootout. He took Trotter out of position with a deceptive move to his forehand side as he crossed  through the crease and at the last second the Northeastern University recruit from Massachusetts  stretched out his body to shovel the puck into the opposite side on his backhand .

The Kings were down to their last shooter and team scoring leader Christian Buono had his shot on Caron blocked, which touched off the Chiefs’ celebration.

The final outcome overshadowed a strong performance from Kings centre John Herrington. The former Cariboo Cougar gave the Kings a 2-0 lead early in the second period when he won an offensive-zone draw and got the puck pack to pointman Colton Cameron. Cameron let go a wrister and Herrington saw it coming and tipped it from the side of the net.

The other Kings goal, in the first period, was a long shot from Zach Gabruch. Winger Corey Cunningham served him the puck on a platter just inside the blueline and Zabruch found the net for his second career BCHL goal and first since joining the Kings in an off-season trade from Salmon Arm.

The Spruce Kings are the league’s second-most penalized team, having accumulated 46 shorthanded situations in nine games. They’ve successfully killed off 91.3 per cent of those penalties (third-best in the league), but there’s no doubt their undisciplined play is costing them points.

The Spruce Kings’ second-place record dropped to 5-3-0-1-0 and they sit three points back of front-running Chilliwack (7-3-0-0-0), holding a game in hand over the Chiefs, who have reached the midway mark of the 20-game season.

The Kings will be back on the ice in Chilliwack Monday (5 p.m.) to face the Merritt Centennials. The Cents (2-7-0-0-0), have lost all four games to Prince George this season, outscored by a combined 21-4 margin.