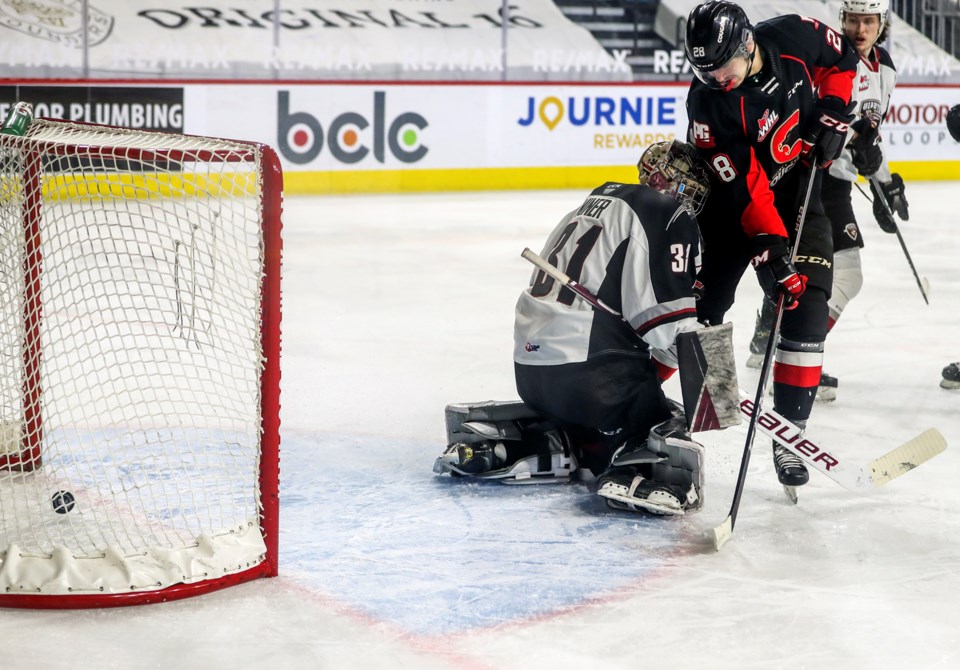 Cougars winger Blake Eastman distracts Trent Miner as a shot from Koehn Ziemmer trickles through the legs of the Vancouver Giants goalie during Sunday's game in the WHL pod in Kamloops. The goal gave the Cougars a 3-0 and they went on to a 5-2 win.Allen Douglas

The Prince George Cougars didn’t get many shots on either Vancouver Giant goalie but made those they did get on goal count.

Ziemmer’s pair were sandwiched around Armstrong’s team-leading seventh goal, as the Cougars stormed Vancouver for a 3-0 lead in the opening six minutes. Ziemmer, on his first goal, fanned on is forehand try but kept the puck on his stick and went across the crease and scored on a backhander just 1:54 in.

The Cougars’ top line all had a hand in the second goal at 4:11. Defenceman Jack Sander pushed the puck ahead to Tyson Upper, who handed off to Ethan Browne. Bowne put the brakes on in the right face-off circle and spotted Armstrong in perfect position to redirect the puck into the net.

Less than two minutes later, Ziemmer took off at high speed down the left wing to create a 2-on-1 with Eastman and cut into the middle for a shot that squeaked through the legs of goalie Trent Miner.

The Giants pushed back with Nielsen’s first goal eight minutes into the game and held a distinct edge in play in the rest of the game but had extreme difficulty scoring on goalie Taylor Gauthier.

At the other end, Miner had a night he’d rather forget and was chased from the Vancouver net 44 seconds into the second period after Eric Florchuk lost control of the puck inside the Giants’ zone, sending Upper in alone and his shot from the left circle sailed in over Miner’s shoulder. After giving up four goals on nine shots, Miner was replaced by Drew Sim.

“We did a real good job of just getting the puck out our zone and creating an odd-man rush or a race situation and were able to capitalize on a couple of those,” said Cougars associate coach Jason Smith. “Brownie made a real good play to (Armstrong). When you start the game and get up you’ve got to continue to stay focused but after that we kind of struggled a little bit. But (Gauthier) shut the door and gave us some real big saves at opportune times that kept us in the lead and kept us in a solid spot after the first period.”

The Cats had been held to just two shots in the second period when Eastman took a shovel pass from Carter MacAdams and went one-on-one down the right wing with Tanner Brown. Eastman’s shot went under the stick of the Giants defenceman and fluttered in under the arm of Sim. It was the first goal of the season for Eastman, who turns 18 on Wednesday, and the second of his 63-game WHL career.

Eastman’s has been noticeably effective lately using his six-foot-three, 211-pound bulk to his own advantage playing the right side on a line with the rookie MacAdams and veteran centre Connor Bowie. Cougars play-by-play announcer Fraser Rodgers predicted early in the game Eastman would score and that premonition proved correct.

“He’s just gotten back to the basics of being a north-south player and really trying to get involved in the game with the physical part of it, but also just not overthinking the game offensively and trying to do too much,” said Smith. “He’s a layer who can really shoot the puck, given time and space around the net. He’s just got to be going north-south and limit east-west and overhandling the puck and he can be a real positive factor for us most nights if he plays that style.”

Gauthier played a huge role in the win, making 29 saves, and the 20-year-old improved his season record to 5-6. His best save came two minutes into the second period, right after Upper scored his third goal in the past three games. The puck came to Giants winger Bryce Bader and he was all alone in front as he dragged the puck wide and shot but Gauthier did the splits and stuck out his right hand to swallow Bader’s shot with his trapper.

Playing with a big lead, the Cougars let their intensity wane and were guilty of getting sloppy in their own end. They had trouble clearing the zone in several extended stretches of the game and Gauthier was there to bail them out.

He had no chance to stop Nielsen’s second of the game and team-leading 13th in the third period when the fifth-year veteran centre was left unguarded in the slot to take a behind-the-net feed from Justin Sourdif. Giants’ defenceman and Prince George minor hockey product Jacob Gendron made a deft play at the blueline to hold the puck in the zone and his assist on the play was his first point of the season.

The win allowed the Cougars (7-7-2-1) to get back to the .500 mark. It was their fourth win in six games this season against Vancouver. Including a 1-0 shootout loss to the Giants April 4, the Cats have gained nine of a possible 12 points in the season series.

The Cougars will try for their first win this year against the Kelowna Rockets Tuesday in Kelowna (7:05 p.m. start). The Cats have five games left in their 22-game schedule and will face the Giants (10-8-0-0) again Wednesday in the WHL hub in Kamloops.

LOOSE PUCKS: The 17-year-old Armstrong is a Giant-slayer this season. Six of his seven goals have been scored against Vancouver… The Cougars scratched C Brendan Boyle (upper-body injury), RW Kyren Gronick (upper-body), LW Jonny Hooker (suspended), G Tyler Brennan (playing for Canada at IIHF U-18 World Championship in Texas) and D Hudson Thornton (healthy). Thornton, a 17-year-old affiliated player who joined the Cougars from the USHL Fargo Force, is allowed to suit up for just six games with the Cats this season and has already played four… Gendron celebrated his 18th birthday Saturday in Kelowna, where the Giants beat the Victoria Royals 5-4 in a shootout… Gendron, along with Cougars Fischer O’Brien and Aiden Reeves, was born and raised in Prince George.