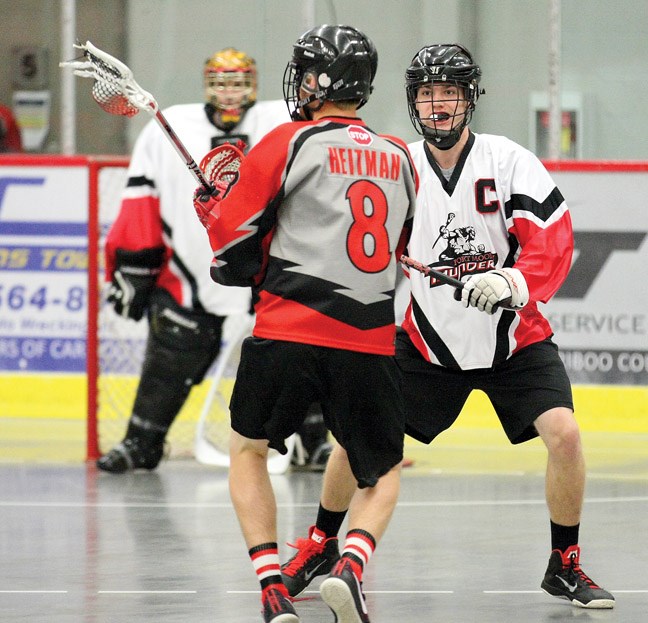 In this July 25, 2015 file photo from the A2 midget A2 provincial championship at Kin 1, Andrew Heitman of the Prince George Posse looks for an opening to take a shot against the Port Moody Thunder. All competitive sports games across the province are currently on hold due to pandemic health restrictions.Citizen file photo

The old saying that practice makes perfect doesn’t apply to young box lacrosse players facing the real possibility their season will be cancelled again because of the pandemic.

They need games and competitive drills to develop the skills needed to play Canada’s national summer sport and right now that’s not happening with a provincial public health order in place which bans close contact for minor sports activities.

How can you play a physical game like lacrosse and stay at least three metres away from your opponent?

That three-metre rule and travel restrictions that ban non-essential travel will remain in place at least until May 25 and that rules out rep teams from leaving the city for competitions.

As coach of the Prince George Posse bantam rep team, Jeff Moleski had hopes the pandemic would be behind us by now but that’s certainly not the case.

“As far as any games or tournaments or anything it’s not looking good,” said Moleski. “It sure is a shame. All the kids are geared up wanting to go and there’s nothing for them to do. We’re practicing but it’s very strict rules and it doesn’t look like any games are on the horizon.”

So far this year, 125 players have registered in the Prince George Minor Lacrosse Association , about 100 fewer than most years and down considerably from the 180 the league had registered last spring before the provincial lockdown shut the league was shut down. Prince George was all set to host the bantam provincial championships last July when the season was canceled.

In a typical year, PGMLA teams would by now have played nearly a month of games in the local house league and Great White North zone, which includes teams in Williams Lake, Quesnel, Mackenzie and Fort St. John.

“I think a lot of people are just still afraid of being around others and the fact we can’t play any games is what really sucks,” said PGMLA secretary-treasurer Tammy Brown. “It is disappointing but we’re just happy we have the kids out on the floor.”

Practices began on April 12 at CN Centre and the 10-week season will continue through June 23rrd, whether there are games allowed or not. Parents are not allowed to stick around to watch the practices and are required