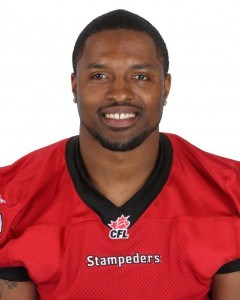 Former CFL all-star Keon Raymond has been hired to become the director of football operations for the Prince George Kodiaks Football Club.Handout photo

Keon Raymond, the newly-hired director of football operations for the Prince George Kodiaks Football Club, needs no introduction to fans of the CFL.

For nine seasons, he was a standout defensive back/linebacker and a two-time all-star who won two Grey Cups for the Calgary Stampeders. Now he’s coming west to Prince George to build the Kodiaks grassroots minor football program and give players from kindergarten to high school year-round opportunities to play the game.

“I think Craig (Briere) has an amazing vision of what he wants to do within football in the community and the nearby towns. I would like to get that communication going with minor football and the high schools as well and build those strategic partnerships within the community and how we can all work together to grow the sport of football in Prince George. Our goal is making sure we have football activities year-round where they focus in on skill development of being better football players.”

Briere, the Kodiaks’ club president, says Raymond is perfect for job and envisions him raising the profile of football in the area to unprecedented  heights.

“Obviously Keon has an exceptional resume when it comes to the football side of things,” said Briere. “But more importantly the thing that really stood out for us was his character, his family, his wife Bianca and their kids are exceptional people as well and the value he’s going to bring to Prince George and northern B.C. as a whole as the face of football.

“He’ll oversee all our programming, from five-year-olds up to adults, and to ensure that we are practicing best practices and doing the safest, funnest football possible and at the end of the day making sure our kids get opportunities to enjoy the sport and potentially move on to higher opportunities if that’s their desire.”

Raymond helped pioneer 7-on-7 non-contact football four years ago in Calgary as a safer alternative to the tackle game, which has proved popular with players and has helped alleviate parents’ concerns about their kids getting injured.

“The focus on the non-contact fashion of it is to allow kids to understand the game and the opportunity to move on a field in a game,” said Raymond. “They learn where they’re supposed to be and they learn how to go up and get the ball and how to brace themselves and avoid certain situations. It gives body and spatial awareness for younger kids at a younger age as they get older and start to play tackle football.

“Football is one of the only sports where there’s no size requirements. If you get out there and do good at your job it doesn’t matter what socio-economic standpoint where you come from – white, black, Asian, it doesn’t matter. It’s such a universal game and it gives a lot of kids the opportunity to succeed in a sport.”

Raymond arrives in July, after the season ends for the non-contact Kodiaks Youth Football League, which involves players in grades 2-7, but will be at the helm for the Kodiaks travel teams later this summer. Prince George is the smallest city involved in the upstart 7-on-7 Football Association of Canada.

Raymond hung up his cleats in 2016 after a season split with the Toronto Argonauts and Hamilton Tiger-Cats and the following year he started working with kids as pioneer of the Big Time 7-on-7 League in Calgary. He and Briere met in 2018 when several Prince George teams playing in the Game Ready Elite summer program squared off against Calgary teams in a play-day tournament.

In addition to the 7v7 league, Raymond will oversee the Tyles on Spikes program, Kodiaks Youth Football League, Kodiaks rep teams, B.C. Provincial Football Association Academy and will co-ordinate coaching clinics and player skills camps. Raymond’s position with the Kodiaks is a full-time job and Briere said outside sponsorships, rather than player fees, will cover his salary.

Raymond attended Middle Tennessee State and was an undrafted free agent signing for the Tennessee Titans in 2006. He played in the Arena Football League for the Nashville Kats and New Orleans VooDoo before he landed in Calgary in 2008. He still holds the Stampeders’ record for longest interception return, a 117-yarder in 2009 in a game in Regina.

“To hear 40,000 Rider fans silenced, that was a joy, that’s a memory that will ingrained in my memory forever,” Raymond laughed.

Raymond, 38, is bringing his wife and their four children (who range in age from 10-18) from Calgary. A devout Christian who grew up in St. Louis, Mo., Raymond says he’s looking forward to the move to the city and plans to be here in late-July. He and his family visited the city on Easter weekend, when there was still snow on the ground.

“I know in Canada you get more winter than summer but I’m used to it so it’s no big deal,” he said. “We enjoyed the small-town atmosphere. Granted, a lot of things were shut down at the time (due to the pandemic), but you could see the spirit in the city which we really enjoyed.

“We have a family vacation planned once all the restrictions open up and I’m excited to get in and being able to take this head-on and hit the ground running.”