Golf With Godbout: Hitting the nail on the head 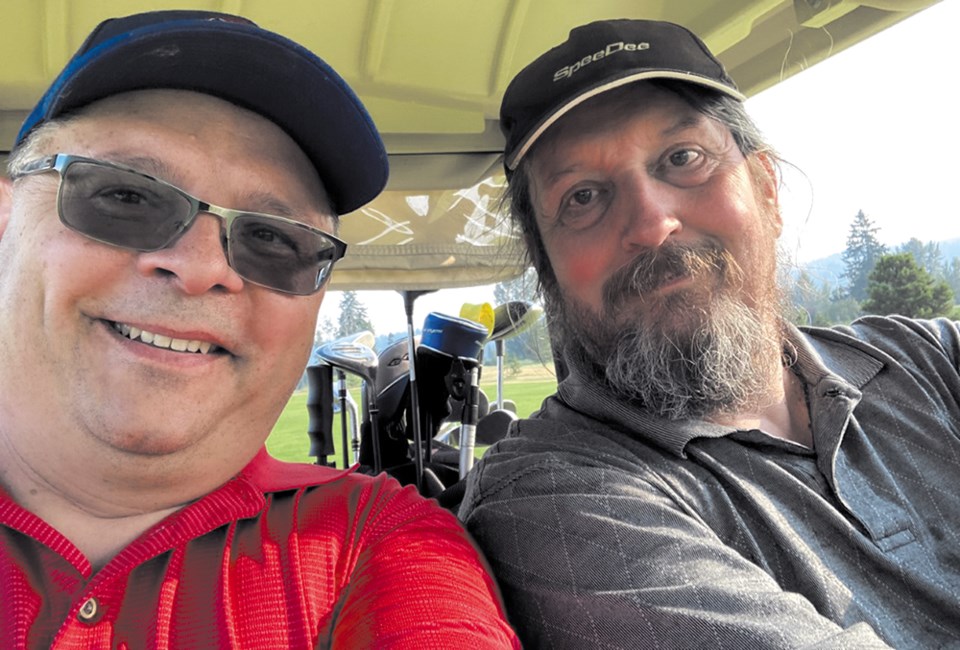 The student and the professor. Todd Whitcombe, right, had some helpful advice to offer Neil Godbout during their round of golf together last week at the Prince George Golf and Curling Club.Citizen staff photo

Each week this summer, Citizen editor Neil Godbout will share his experience learning to golf at the Prince George Golf and Curling Club. Want to get in a free round with Neil? Just drop him a line at ngodbout@pgcitizen.ca

There’s an old carpentry joke that applies to me whether I’m holding a hammer or a golf club.

My swings are like lightning because I never hit the same place twice.

In the case of golf, weird things happen when you don’t hit the ball right.

Hitting the ball squarely with the face of the club but in a glancing sideways motion (commonly referred to as “slicing” the ball) puts a spin on the ball that makes it curve like a baseball.

Skilled golfers are able to intentionally hit these kinds of shots (they call them draws and fades) to work around trees, water and sand hazards or to get a certain roll towards the hole but for mere mortal golfers and especially beginners, slices are trouble because they inevitably leave you somewhere you don’t want to be.

A bad habit I’m working hard to eliminate is topping the ball. Instead of hitting the ball a smidge below centre so I’m driving it up and forward at the same time, I have a tendency to hit the ball on the high side of centre. The result is the ball first goes down and then skips along the ground, going a fraction of the distance it should have.

Prince George Golf and Curling Club pro Blair Scott has been pushing me hard on making solid, square contact with the ball, laying out pieces of string and putting the ball in the middle to get into my noggin what it looks and feels like for the club to strike the ball on the nose.

During my round last week with Citizen columnist and UNBC chemistry professor Todd Whitcombe, I was able to do that some of the time but consistency is still my greatest downfall.

I shot 11 and 10 on my first two holes. Then on the ninth hole par-5, I shot a 6 and only putted once. On the par-four 15, I shot a five, the only hole of the day I beat the good professor. Shooting bogey is outstanding for me.

On the par-5 18, I was on the green in four shots, just like Todd. On that final hole, nearly four hours into the round, I made a mental change to my swing and it worked beautifully. Throughout the round, I was taking nice practice swings but then when I stepped up to the ball, I forgot everything and felt I had to strike the ball instead of just making good contact.

So, as I stepped up to the tee on 18, I remembered the wiffle balls I’ve been practising with and how those little, hollow plastic practice balls with the holes in them have brought out better swings.

At the top of my swing, in the instant of stillness before I started bringing the down to the ball, I said “wiffle ball” in my head.

Straight up the fairway, good elevation.

Did it again with the hybrid second shot with the same result.

Came up short of the green with my hybrid third shot, because I start getting excited about the prospect of being on the green in three and putting for a real-world birdie.

And then my “wiffle ball” mental tip fell out of my head, I chipped too far, putted too aggressively and turned my birdie chance into double bogey.

Still, the 136 score is a 12 shot improvement over my previous best.

Best of all, the game is becoming more fun. I feel I have the ingredients to play better and I just need to keep practicing on the basics.

And keep the wiffle ball top of mind.