Golf With Godbout: Buddy, you need to get a grip

A proper grip and the aiming aid had an immediate effect. The grip helped me aim much better and also made my swing more controlled and less wild.
Jun 23, 2021 8:41 AM By: Neil Godbout 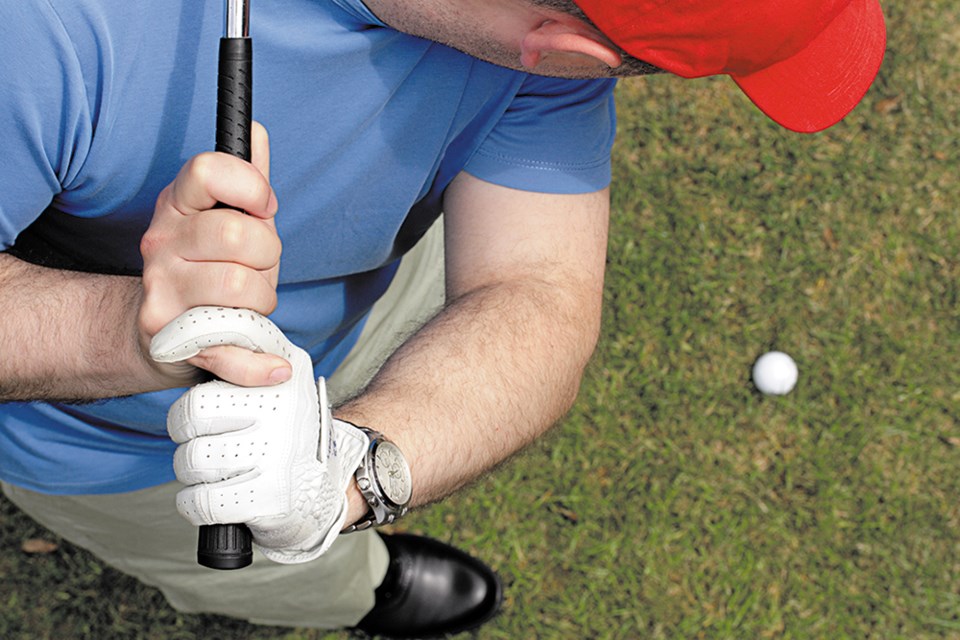 This is an example of an interlocking golf grip.Getty Images

Each week this summer, Citizen editor Neil Godbout will share his experience learning to golf at the Prince George Golf and Curling Club. Want to get in a free round with Neil? Just drop him a line at ngodbout@pgcitizen.ca

Old habits die hard and I’ve acquired about 15 years of bad golf habits, starting with holding my golf club like a hockey stick.

The first order of business in my first lesson with Prince George Golf and Curling Club pro Blair Scott was to get my hands right.

There are three main golf grip styles: interlocking, overlapping and the baseball grip. All three accomplish the same thing, which is to get the hands working together with the arms and then the shoulders and the rest of the body in one cohesive swing.

Once Blair had me using a proper grip (I did the baseball grip during the lesson but I’m thinking of sticking to the interlocking grip), he set me to hitting a few balls with a pitching wedge off the mat at the driving range. He also laid out a small pole about 10 yards out with a string stretching back to the mat as a way to help me aim.

A proper grip and the aiming aid had an immediate effect. The grip helped me aim much better and also made my swing more controlled and less wild.

But that’s just the beginning.

Blair got to work on making me aware of the full golf swing recipe.

At this point, it’s the equivalent of thinking of all the individual steps needed to ride a bike. It’s overwhelming for me now but the goal is to put in the time and effort that it all becomes proper habit and each step happens naturally and without much conscious effort.

We then did a little chipping practice and I’m going to have to work extra hard to break my bad habits here because I do everything wrong. I swing off my back foot, flicking my hands to lift the ball. Blair got me to work distributing most of my dad-body weight on my front foot with a short, controlled swing.

After a few swings, he zeroed in another error.

“You want to stab at the ball,” he said, stressing how the club head should hit the ground as part of the swing to get right under the ball.

That’s another habit I’ll have to break. I always thought divots were the sign of a bad swing but they’re actually the exclamation point on a good swing.

After Blair left, I spent the next hour hitting a bucket of balls, carefully focusing on my technique. I was hitting better shots, straighter, farther and more accurate more often. I was able to analyze what went wrong with the sloppy shots.

Several people reached out to me after last week’s column, wanting to golf with me, including one reader whom I’ve never met but am eager to get to know over a round.

That is the other sweet part about golf. There’s actually not a lot of playing time. Most of it is a nice walk with friends new and old.

But when it’s time to grab a club and get to work, at least I know now how to hold it right and increase my chances of hitting a good shot.

The work continues and it just got a lot more fun and interesting.