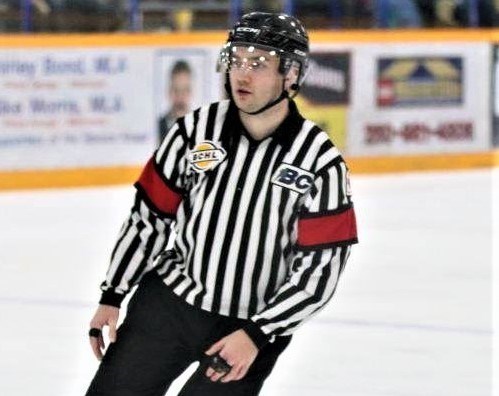 Former Spruce King forward Braiden Epp has made the switch from BCHL player to referee. On May 25 the 24-year-old Prince George native was diagnosed with multiple sclerosis. Handout photo

Once the doctors were on his case, the diagnosis came quickly for Braiden Epp.

Within a month of checking himself into the emergency department at Nanaimo Regional General Hospital, the 24-year-old former Prince George Spruce King found out what was causing him to lose his balance and making his arms and legs go numb.

He was told he has multiple sclerosis, a disease of the central nervous system that causes the immune system to attack the protective sheath that covers nerve fibres, resulting in communication delays between the brain and the rest of the body.

It started about a month before his diagnosis when Epp woke up with back pain. As a hockey player for 20 of his 24 years, he’s grown up with a high pain tolerance level and that comes with playing a physically-demanding game. But this was different. His back was killing him and it kept getting worse, among the worst pain he’s ever felt.

He also noticed he was walking clumsily and stumbling to keep his balance at times. Having made the switch from hockey player to hockey official, Epp was in Port Alberni reffing a BCHL game in the Island Division hub when he really started thinking something was wrong with him. He stepped onto the ice and his feet felt strange as he tried to dig his blades into the ice. With every stride, he felt a delay before his feet moved. He got through the game but not without considerable effort just to keep from falling and he thought maybe he’d pinched a nerve in his back. Ten days later, after working a full week as a labourer for the City of Nanaimo, he was back in Port Alberni for a Sunday evening game, the second-last of the season, when his condition worsened.

“I still had the back pain, so I was kind of worried I wouldn’t be able to skate and I told the guys I didn’t know what was going to happen and I stepped out on the ice and couldn’t skate at all,” said Epp. “I was falling down and so out of sorts and I only made it five minutes to the first TV timeout. I told the guys I’m going to get hurt, somebody was going to hit me, and it’s just not safe for me to be out here. I couldn’t move my feet at all, basically just coasting and using the boards as a support, and I left that game.”

He called his parents in Prince George, Deanna and Rod Epp, and they told him to go to the Nanaimo walk-in clinic to get checked, but with COVID protocols in place there was a long line of patients ahead of him and Epp wasn’t able to see a doctor that day. He went back to work that week and felt fatigued every day. That Friday, while driving his truck, his arms and legs went numb and were tingling and he drove right away to the hospital for the first of a series of tests that revealed the reason he was struggling.

Epp played four full seasons in the B.C. Hockey League, three with the Spruce Kings before ending his junior eligibility in 2017 with the West Kelowna Warriors. As a friend of the Albinati brothers, Nick and Josh, who were both wearing stripes as BCHL on-ice officials, Epp decided three years ago to put his skills as a hockey player to use making calls on the ice. Within a year of him starting to work midget games in Prince George, he had earned his way to into the BCHL as a linesman.

He continued that for another season before he moved to Nanaimo last August to enroll in the kinesiology program at Vancouver Island University and this past season he became a referee. The pandemic limited him to games in the Island Division hub but he enjoyed his time laying down the law on the ice.

Epp found out he had MS on May 25 and it didn’t take long for him to get involved in an effort to help find a cure for the disease. Dylan Ellison, his friend from Shas Ti Kelly Road Secondary School in Prince George, put together a web page for Epp to take part in the virtual walk for MS on May 30. He was part of a seven-team contingent from the city that entered a national fundraising contest and Epp and his team won it. They raised more than $30,000 for MS research and the total will be doubled by matching funds from the MS Society of Canada. Epp raised nearly $20,000 himself in the online contest, aided by a graphic Ellison put together to be used by Sticky’s Candy for a fund-raising T-shirt. It depicts the No. 26 Spruce Kings jersey Epp wore when he was one of the team’s assistant captains.

“We made so much noise and it was so surreal to see the community get behind me and all the texts and calls from ex-teammates, friends, people I don’t talk to, strangers - it was unreal the support I got and I think that’s what got me through those first five days was the people reaching out to me and making sure I was OK,” he said. “It was a tough time for me physically and mentally and that meant so much to me.”

As an aspiring phys-ed teacher, Epp is unsure of his long-term prognosis but plans to return to Nanaimo later this summer to finish off his degree at VIU, working with the same team of medical staff he’s been with the past two months

“They want me to find what my triggers are and try to avoid the stresses in my life,” he said. “They’re still waiting for a few blood tests to come back before I get on the medication that helps keep that stuff at bay. They say I should be able to lead a healthy life, by what they see so far. That’s my plan, to stay active and keep living.

“I’m scared to try and skate again, because it was such a hard thing for me to lose that ability. I do want to continue reffing, so I’ll work hard in the rehab process to make that stuff work and I hope to keep playing recreational hockey, which is such a big part of my life. It may not be at the highest level I want to get to but if I can still skate I’ll be more than happy.”

According to Statistics Canada, about 97,300 people in the country have MS. Most frequently diagnosed in people aged 20-49, it’s prevalence in Canada is among the highest reported in the world.