Sakamoto joining Vancouver teams to play with his provincial-calibre peers
May 16, 2021 6:05 PM By: Ted Clarke 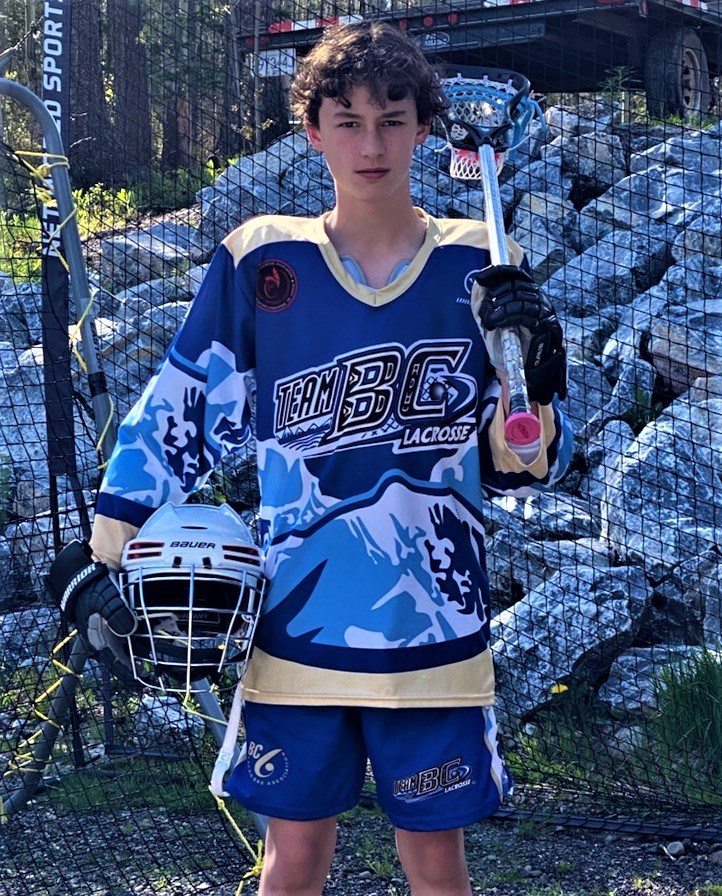 Garrett Sakamoto sports his Team BC jersey while posing in front of the practice net at his Buckhorn neighbourhood home. The 14-year-old second-year bantam for the Prince George Posse is hoping to salvage a pandemic-ravaged season with a trip to California with his Vancouver-based club team to play in the U.S. national box lacrosse championships in August.Handout photo

Garrett Sakamoto in only 14 years old but he’s a driven individual and already knows what he wants to do with his life as a student athlete.

Unfortunately for Sakamoto to reach his potential playing the sport of field lacrosse he will eventually leave Prince George and that’s a shame. It means that once the lacrosse world returns to normalcy and sheds its pandemic handcuffs, allowing games to proceed and a return to occupied spectator stands in local arenas, it’s only a matter of time before Sakamoto has to adopt a Vancouver-area address so he can pursue his field of dreams and we won’t get to see him in action.

“It’s been pretty tough to stay focused on field because we don’t have field lacrosse here so we’ve been flying down there every second weekend and practicing with a couple teams every time we go,” said Sakamoto. “I’ve been practicing out front (in his Buckhorn yard) every day for hours.”

At 14, Sakamoto has already established himself as one of the top youth lacrosse players in the province. He made the provincial box in 2019 as a peewee, along with his Prince George Posse teammate Jackson Moleski. Sakamoto was one of the team’s leading scorers that year in the tournament and helped B.C. get to the national final in Vancouver .

He might have had a shot at making the bantam team last year but COVID wiped the season out before it even began, denying the Posse a chance to play as the host team in the bantam provincial championship last July. Sakamoto’s contributions to Team B.C. led to an invitation for him to play box and field lacrosse in the Lower Mainland.

“It’s super-fun going there and playing with kids I know down there and seeing them play,” Sakamoto said. “Trying out for different teams every year is a great experience and it’s a great feeling when you make the teams.”

He credits Posse bantam coach Jeff Moleski for getting him prepared for those tryouts and working with him throughout the year on lacrosse fundamentals.

“I don’t know if I’d be here now if it wasn’t for him, he’s helped me a lot, he tells me everything I do wrong and everything I can improve on and he’s just a really good coach,” said Sakamoto.

Sakamoto started his frequent-flyer sojourns in the 2019-20 season with Evolve Elite, a club team in Vancouver, and they played in field lacrosse tournaments all over the western United States that winter before the pandemic began. He made the team for the 2020 World Series of Youth Lacrosse field championship but the July tournament was cancelled with the lockdown. He played boxla last year in the four-team United Lacrosse League. Based in Vancouver, the league gathered  80 of the top bantam-aged (13-and-14-year-old) players in Western Canada for a three-month season.

This year, Sakamoto is playing field lacrosse for Fusion West in Vancouver and the Fusion bantam team is gearing up for the U.S. National box lacrosse championship in San Jose, Calif., Aug. 6-8. That might be his only tournament in 2021 now that the B.C. Lacrosse Association has scrapped its box and field provincial championships for 2021. Sakamoto made the B.C. team again for this year’s World Series tournament in Maryland,  June 30-July 3, but he says that likely will also be cancelled.

“I’m hoping at least we can get to a few championships and games, COVID’s ruined a lot of stuff for us,” he said.

The plum he’s shooting for at the end of his minor lacrosse career is a scholarship to play field lacrosse at a U.S. college in the NCAA and that’s fueling his desire to stick with Canada’s national summer sport and keep playing at the highest level possible.

“That’s our main goal, that’s basically why we’re doing this is to get that scholarship and have fun,” said Sakamoto, a Grade 8 student at Prince George Secondary School.  “I basically play year-round except for now, because of COVID. Field lacrosse usually starts up in August and it usually ends right when box starts (in April).”

Most of the players of Sakamoto’s calibre are concentrated in the Lower Mainland or Victoria and with team travel restrictions still in place at least until May 25 under the province’s current pandemic health order, his Posse team will remain grounded, unable to play any competitive lacrosse.

“If you’re talented then it’s even worse, we’re up north and it’s tough for him to get the notice he needs to get and play on the teams he needs to play on,” said Garrett’s father Trevor. “Because there is no box (games) up here and there are no field teams up here, our focus is to try to get Garrett a field lacrosse scholarship with one of the U.S. colleges or universities so he’s been playing field lacrosse as much as he can but of course that means traveling to Vancouver every second weekend if he can.

“We’ve been approached to have him billeted down there but in my mind he’s too young for that and we’re doing what we can to keep him up to speed with the rest of the kids, so he doesn’t fall behind.”

The NCAA has tapped the Prince George field lacrosse talent pool a few times in the past. Justin Norbraten, started his college career at Simon Fraser University in 2003 and was playing field on a scholarship for Bellarmine University in Kentucky when he got drafted ninth overall in the 2007 National Lacrosse League draft.

Leif Paulson earned a scholarship to attend Cornell University in New York and was with the Big Red in 2009 when they lost the NCAA Division 1 championship final in overtime to Syracuse. Most recently, Cole Paciejewski was a mainstay for the Pfeiffer University Falcons in North Carolina in a four-year career that ended when he graduated in 2015. Sakamoto met Paciejewski and Paulson a few times when they showed up at the weekly field lacrosse workouts at the Roll-A-Dome. Since mid-April, he’s been training twice a week at CN Centre with his house league team.

Before he started playing lacrosse at age 8, Sakamoto studied judo for five years. His martial arts training toughened him up for the physical contact that comes with playing lacrosse and his five-foot-six, 110-pound frame is used to taking hits. He also likes to play football as a receiver and cornerback but says he might not have time to commit to the PGSS Polars junior team.

“I grew a lot, like six or seven inches in about five months, it was a huge sprout,” he said. “I eat a lot.”

He says he’s not the fastest runner on the lacrosse floor but he has added some speed to his legs and notices the improvement.

“I took some running lessons with Cathy Johnson (a coach for the Prince George Track and Field Club) and that helped me lots,” said Sakamoto. “She taught me the faster you move your arms, the faster your legs move.”