Chilliwack climbs back into first place as BCHL season end draws near
May 3, 2021 7:58 PM By: Ted Clarke 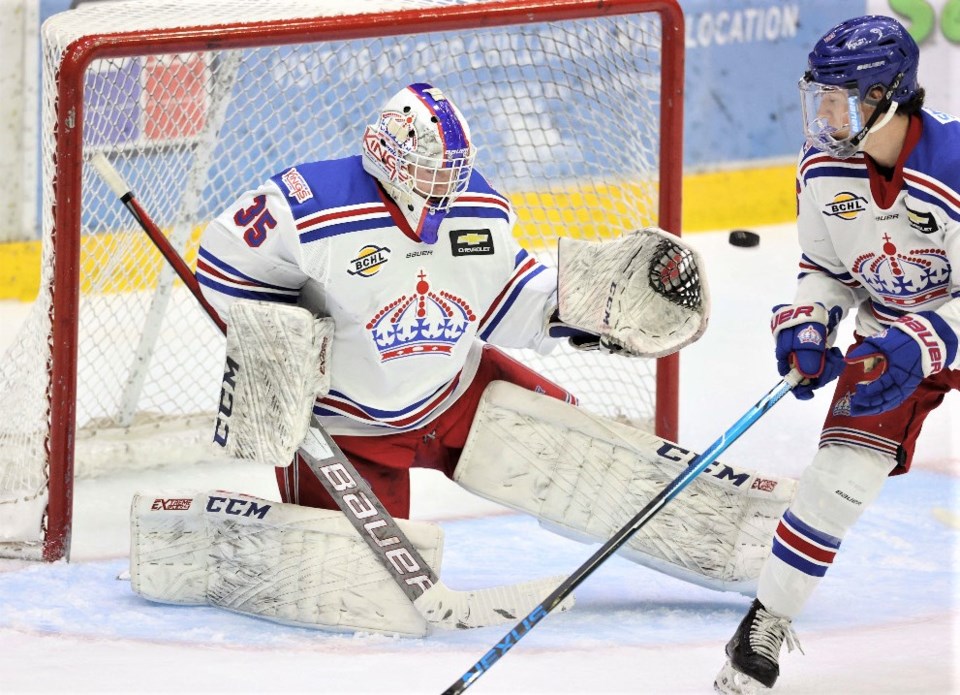 Aaron Trotter makes a save in the Spruce Kings net while defenceman Tanner Main stands guard during their BCHL game Monday in Chilliwack against the Chilliwack Chiefs. The Chiefs won 3-0.Garrett James

The good news is the Prince George Spruce Kings still have three games left this season, while the Chilliwack Chiefs are down to their last two.

The bad news, from a Spruce Kings’ perspective, is that they’ve lost their grip on first place in the BCHL Chilliwack pod. They fell 3-0 to the Chiefs Monday evening and now trail Chilliwack by a point in the race for the season title.

Anaheim Ducks draft pick Ethan Bowen provided all the offence the Chief needed to leapfrog the Spruce Kings, scoring two third-period goals, including an empty-netter, to give the Chiefs their 12th win in 18 games this season.

Mathieu Caron made 25 saves to register his third shutout of the season. He improved his record to 9-5.

Bowen, an Anaheim seventh-rounder in 2020, showed the speed the NHL scouts liked on his first goal, 15:57 into the third period on a Chilliwack power play. He burst down the left side leaving there Spruce Kings in his wake and went to his backhand side to bury the puck through the legs of Kings goalie Aaron Trotter. The 18-year-old Chilliwack native, a North Dakota college recruit for 2021-22, leads the Chiefs in scoring with 10 goals and eight assists in 18 games.

Connor Milburn got the Chiefs started midway through the second period, sprung free with a long pass up the boards from Trevor Longo. He ripped a shot from the face-off circle that fooled Trotter.

The Kings had their chances on Caron but were unable to finish. Their power play came up empty-handed in four chances, while the Chiefs were 1-for-5.

Kings left winger Kolton Cousins did not make the scoresheet but was standout on defence blocking shots and breaking up scoring chances as the game’s third star.

Forward Andrew Seaman, the Kings’ second-leading scorer, left the game with an apparent injury in the first period and did not return for the final two periods. The 21-year-old Illinois native had 10 goals and 16 points in 17 games.

The Chiefs improved to 12-6-0-0-0. The Spruce Kings (11-5-0-1-0) have now lost two straight games, after putting together a six-game win streak. They’ll face the Merritt Centennials (3-14-0-0-0) on Wednesday and again on Friday, before taking on the Chiefs again Sunday in the final game of the Chilliwack pod season.