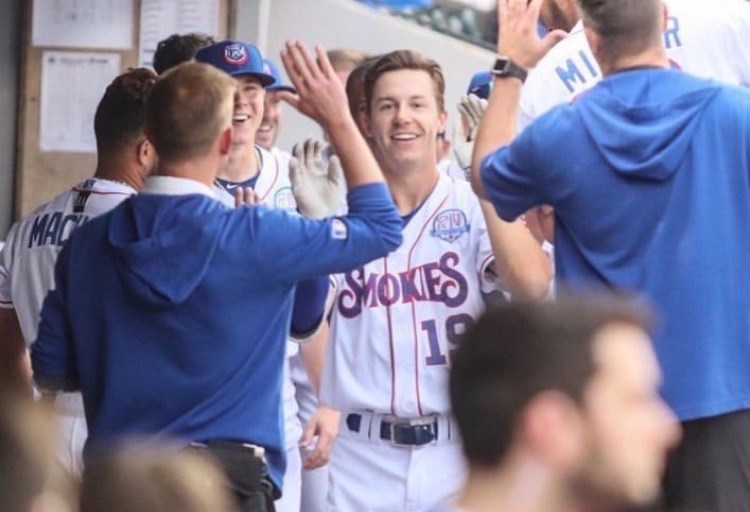 Prince George's Jared Young (#19) high-fives his Tennessee Smokies teammates in the home dugout in this 2019 file photo. (via Instagram/Jared Young)

It was 39 C around noon Monday in Mesa, Ariz., heading for a high of 42 C, and Jared Young was not complaining.

With this being his fourth season in the Chicago Cubs’ organization, Young is used to the desert heat. Just the fact he’s playing baseball and hitting live pitching again at the Cubs’ spring training/rehabilitation facility in Mesa is enough to keep Young in high spirits.

The Tennessee Smokies first baseman is heading into his seventh week on the injury shelf after suffering a separated shoulder and torn labrum making a diving catch to stop a groundball during a May 8 Double-A South game at Smokies Stadium against the Montgomery Biscuits.  But after six weeks of working with Cubs physiotherapists and trainers every day, combined with on-field workouts and weight training, the 25-year-old from Prince George is feeling much better about his progress and eventual return to the Smokies.

“This is the seventh week so I’m basically able to do everything now,” Young said Monday afternoon. “There’s a full-time rehab training staff, because there’s a few guys injured from different levels, and we all kind of just meet here. It’s a little bit hotter than spring training but I’m used to it now. ”

He’s back simulating game situations and has been hitting off pitchers for four days now.

“It’s literally night and day, it’s way better than hitting off a machine,” he said. “When you get that hitter-versus-pitcher atmosphere it makes things seem a lot more real.”

The injury is on Young’s left (catching) side, which will help speed up his recovery time. The labrum is the cartilage that holds the ball of his humerus (arm) bone in the shoulder socket and the muscle tore when his shoulder separated on impact with the turf as he dove for the ball. He made the catch but once he hit the ground he was unable to move to toss the batter out.

“I’m just rehabbing it to make it stronger, it’s not going to heal completely, because surgery is kind of the only way to heal that, so I’ll strengthen everything around it and then get back at it and they’re just going to make it manageable,” he said.

“This is the first time (in four seasons as a pro) I’ve had to come back to Mesa to do stuff during the season, which is super unfortunate but I’ve been lucky so far. A lot of people go through it and it’s part of the game. Unfortunately for me it happened three games in after waiting a year and-a-half.”

Young was just finding his rhythm again after the minor leagues were shut down completely before they even began due to the pandemic, which wiped out the 2020 season. At the time he got hurt, a couple innings into his fourth game of the season, Young was hitting .273 and had three hits, four runs and one base on balls in 11 at-bats.

“A three-game sample is really small but it was nice to get playing and that was the thing I missed most was playing in games and being back in Tennessee and having fans, it was pretty incredible,” he said. ““The people there are great and the team is a lot of fun. I can’t wait to get back. I was super bummed out when I got hurt.”

He has no idea when he’ll be going back Sevierville, the home of the Smokies, in the suburbs of Knoxville.

“It’s hard to judge, it’s not my call,” said Young. “It’s kind of something you don’t say. I would say I’m comfortable to play and I’m not thinking about it, and that’s the biggest thing. If it was my throwing arm this would be much different. The rehab process has gone great. The strength coach and the trainers here are incredible and I’m lucky I have them. It would have taken a lot longer without them.

“Mine was a freak injury where I dove for a ball and messed up my non-throwing arm. A torn labrum is so common in baseball that they know exactly how to heal it, but it’s not normally on the catching arm.”

Young called it “the grossest injury” he’s ever had because it left his shoulder dislocated close to his chin, until the Smokies trainer yanked on his arm to put it back in place and temporarily relieve the pain. The same labrum injury sidelined San Diego Padres star shortstop Fernando Tatis Jr., when he dove for a ball Saturday in a game against the Cincinnati Reds.

The Smokies got off  to a 3-1 start but they’ve had a run of injuries to other key players and have since fallen into fourth place in the North Division, sporting a 14-26 record heading into a six-game set that starts Tuesday at Mississippi.

One plus for Young being in Arizona for his rehab assignment is he’s back living with his girlfriend Julia in nearby Scottsdale.

“I know some of the guys down here and it can get lonely and bit frustrating when all your friends are playing and having success and you’re here for physical therapy every day,” he said. “But it is nice having her and it’s definitely made things a lot smoother for me.”