Critical weekend ahead for Cougars 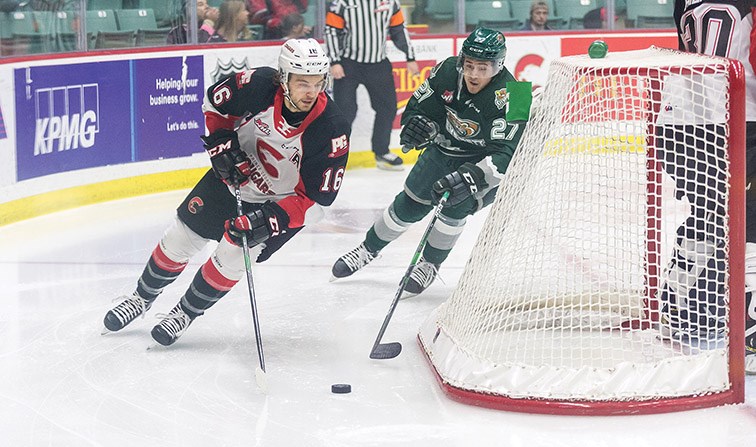 Prince George Cougars defender Ryan Schoettler skates the puck behind the Cougars' net out of the reach of Everett Silvertips forechecker Jalen Price during a Jan. 4 WHL game at CN Centre.Citizen photo by James Doyle

Time is running out on the Prince George Cougars' push for the playoffs.

Heading into a clash with the ever-tough Everett Silvertips Friday night in Washington state, the Cougars desperately need to start stringing together some wins and reverse the trend with just 15 games left in their 68-game schedule. They'll try to end a four-game losing streak in their attempts to catch the Seattle Thunderbirds for the second wild-card playoff spot in the WHL's Western Conference.

The T-birds, who will host the Cougars Sunday afternoon in Kent, Wash., increased the gap they hold over the Cougars to 11 points after a 5-2 home ice win over the Moose Jaw Warriors Tuesday night.

The Cougars are coming off a disappointing weekend at home which included a pair of 4-2 losses to the Calgary Hitmen on Saturday and to the Red Deer Rebels on Monday. After a flat performance against the Hitmen they were much-improved against the Rebels but the result was the same - no points.

"We need points, there's no doubt about it, to get points you've got to play good and do the right things and that's what we've been preaching all year," said Cougars head coach and general manager Mark Lamb. "The Calgary game I didn't like a lot of things that were going on that we cleaned up in the game against Red Deer."

Lamb said the players are handling the pressure to win to try to avoid missing the playoffs for a third consecutive season as best they can. One thing going for the Cougars is they have a healthy roster for the second consecutive weekend, a rarity for the team this season.

"We know exactly where we're at, it's a situation we've been in all year," said Lamb. "There's no panic. This team's been fairly consistent all year long in a different way. We play hard and I think we're a better team than we were at the start of the year. That being said, the teams that we're playing are a lot better too. Nothing's going to be easy and we know where we sit and we've got to get points."

The Cougars won the first of three meetings so far with the Silvertips Dec. 27 in Everett, a 4-3 decision. Everett beat the Cats 4-3 on Jan. 3 and 5-2 on Jan. 4 at CN Centre. In all three games the the 'Tips were without starting goalie Dustin Wolf, who was playing for Team Canada in the world junior championship in Czech Republic.

The Silvertips (8-1-1-0 in their last 10) were busy at the trade deadline adding the likes of forwards Ty Kolle (a former Cariboo Cougar midget acquired from the Regina Pats), Ethan Regnier (Swift Current), and Hunter Campbell (Calgary), as well as Finnish defenceman Kasper Puutio (Swift Current), the first-overall pick in the 2019 CHL import draft. Everett's defence has allowed just 2.34 goals per game, tops in the WHL.

"They're a lot better team than the last time we seen them," said Lamb. "They've been good all year and they got better at the deadline so it's going to be a tough task for us."

Seattle (22-27-3-3) has a busy weekend on tap. The T-birds play in Portland on Friday, return home to face the Winterhawks on Saturday, then take on the Cougars in a Sunday game (5:05 p.m. start). Averaging a a league-best 4.27 goals per game, the Winterhawks (39-8-3-4) have 85 points, tied for first-overall in the WHL with Edmonton, but Portland has played two fewer games than the Oil Kings.

The T-birds, with 13 games left, have what appears to be a tougher schedule the rest of the season than what's ahead for the Cats. Seattle plays Portland five times, Everett twice, Spokane twice, Vancouver twice, Kelowna once and the Cougars once. After this weekend, the Cougars face Kamloops, the B.C. Division frontrunners, four times, Vancouver three times, Kelowna three times, Victoria twice, and Lethbridge once.