In a season like no other, the Prince George Cougars 24-game roadtip continues. From now until May 12, they’ll be getting their fill of hockey playing in either Kamloops, where they’re based, or Kelowna.
Apr 17, 2021 10:45 AM By: Ted Clarke 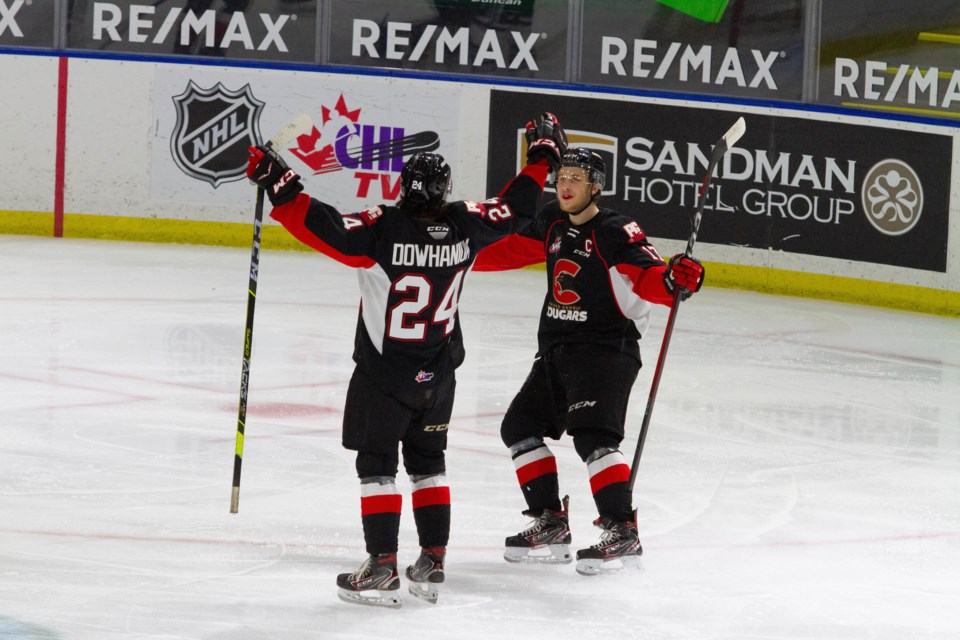 In a season like no other, the Prince George Cougars 24-game roadtip continues.

From now until May 12, they’ll be getting their fill of hockey playing in either Kamloops, where they’re based, or Kelowna. The pandemic put them in this situation, living out of a hotel room next to the rink at Sandman Centre, where they get tested for COVID every week, and nobody’s complaining.

“It’s been excellent, it’s so different because we’re together all the time,” said Cougars head coach Mark Lamb. “The only time we’re not together is when we’re in our rooms. It’s a great way to really get to know the kids and the type of personalities they have.”

The players are free to go for walks away from the rink but have to limit to no more than eight in each group. They have to wear their masks and avoid other people.

The Cougars certainly don’t miss having to try to get some shuteye on the bus between games. In a normal season that’s a fact of life for the most remote team in the WHL, whose closest opponents are six hours away from Prince George in Kamloops. Now they’re part of the Kamloops hub, along with the host Blazers and Vancouver Giants, and the only bus trips are to and from Kelowna, two hours away, where they play the Cats play the Kelowna Rockets tonight (7 p.m., 94.3 FM, The Goat).

“Sometimes the bus is a real good team-building opportunity and when we went to Kelowna it was very enjoyable, just to get out on the bus and see some different scenery,” said Lamb.

The Cougars (4-3-1-1, third place, B.C. Division) got back on a winning track Friday in Kelowna with a 5-2 win over the Victoria Royals. In that game, three Cougars struck for their first goals of the season, including 17-year-old rookie defenceman Keaton Dowhaniuk.

For Lamb and his assistants Jason Smith and goalie coach Taylor Dakers, the COVID-shortened 24-game season and mandatory 14-day quarantines allowed only a week of practice before it began and they are just starting to see the capabilities of the players, half of whom they’d never seen play a WHL game before they gathered a month ago in Kamloops.

“I’ve liked what I’ve seen since I’ve been here, to tell you the truth,” said Lamb. “I’ve really liked a lot of the stuff these guys are doing.

“It’s not just that I haven’t seen these guys play, it’s even getting to know them. So you’re putting them in spots and there isn’t anything disappointing about any of them. I really like the mix, right through the lineup, some experience and some youngness.”

Cougar veterans Jonny Hooker, Ethan Browne, Connor Bowie and Jack Sander are doing their part sparking the offence and they all appear better than when they left off last season, while sophomores Craig Armstrong, Ethan Samson, Blake Eastman and Tyler Brennan, before he left for the IIHF world under-18 championship in Texas, appear to have found another gear.

The 10 rookies on roster are also making their presence felt in positive ways. Carter MacAdams, Kyren Gronick, Hudson Thornton and Koehn Ziemmer have all scored their first WHL goals. Prince George native Fischer O’Brien has three assists and is showing his knack for killing penalties. Defenceman Jaren Brinson earned his first point and he and fellow first-years Thornton and Dowhaniuk are looking more comfortable with each game, a difficult task especially for blueliners.

Hooker has four goals and three assists in the past five games and has formed volatile chemistry playing on a line with Ziemmer on the right side and Browne at centre.

Brennan looked sharp drawing three consecutive starts in his last hurrah this season with the Cougars, including his 43-save shutout in a 1-0 shootout loss to the Giants on Apr. 4. The puckstopping duties now rest in the hands of Taylor Gauthier, whose season started in December with Canada’s world junior team, and 16-year-old untested rookie Ty Young.

“Taylor is going to get a lot of action here and even Young, we’ve got some back-to-back games and I wouldn’t mind seeing him in a game,” said Lamb.

NHL scouts form the majority of the audiences for B.C. Division games and Samson and Brennan have been the drawing plenty of interest, but Brennan won’t be 18 by the Sept. 15 cutoff and is not draft-eligible until next year. They’re also paying close attention to Dowhaniuk and Ziemmer and just-turned 16-year-old centre Riley Heidt. Heidt hasn’t looked out of place taking on players as much as five years older and he had two assists in Friday’s game, bringing the Saskatoon native’s nine-game season total to one goal and four assists. He’s also winning 62.5 per cent of his face-offs, second-best among Cougar pivots.

“The scouts are cramming for the test, too,” said Lamb, “so really, as a hockey [player, you couldn’t be in a better situation. You just have to go out do your job and play good and you’ll get noticed.”

LOOSE PUCKS: Tonight’s game will be the first for the Rockets since March 28. The team went into a 14-day lockdown March 31 when several players and members of the team cohort tested positive for COVID-19. The Rockets (1-1-0-0) have played just two games this season.