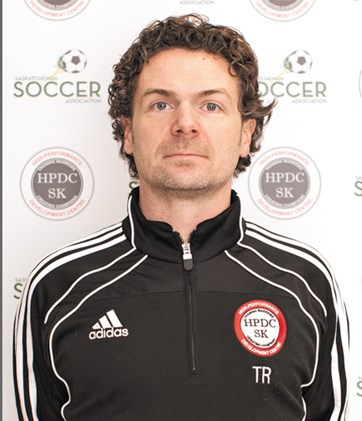 After years of turmoil at the board level and declining numbers on the field, the Prince George Youth Soccer Association has turned to a familiar name with a lengthy list of soccer accomplishments to help right the ship.

Terrol Russell begins his new job today as director of club operations and he comes armed with 11 years of experience as the high-performance stream director with the Saskatchewan Soccer Association.

The chance to return to his hometown, where his parents live, and work in a similar capacity in a youth soccer organization proved irresistible for Russell and after three months of negotiating back and forth with the PGYSA he made up his mind and put his house in Saskatoon up for sale.

"I left Prince George when I was 19 and I'm now coming back about 20 years later to help drive and build a system within the soccer community and maybe in the sport community as well," said Russell. "I have 20 years of experience playing and coaching at high levels and I'm bringing all that experience back home and hopefully rebuilding a structure really where Saskatchewan was a decade ago. Having built Saskatchewan a development system, the opportunity to come back home and do the same thing is very exciting, to be honest."

Russell, 40, has been coaching since he was 15, and achieved his B national licence in 2006. During his playing career he was on the B.C. provincial team and that led to a year playing at Cariboo College in Kamloops and an NCAA scholarship at Greensboro College in North Carolina. He transferred to the University of New Brunswick, where he earned a masters degree in kinesiology and exercise science. He played two seasons in CIS for the Reds before his playing career was cut short by an injury related to compartment syndrome.

Not long after he joined the Saskatchewan Soccer Association in February 2007 Russell came up with a list of projects he hoped to unveil as his longterm goals to produce high-performance athletes, coaches and officials and he says he's ticked all of those boxes.

Kerrie Secor presides over the 10-member PGYSA board, among eight new members who joined the organization in November, and they jumped at the chance to hire someone as qualified as Russell to fill the void left when technical coach John Ribeiro moved to Vancouver.

"Terrol reached out when he heard we were hiring and he had a desire to come back to Prince George, where his roots are, and help rebuild soccer in our community, with numbers being down across Canada, and he was excited about the prospect of getting PGYSA back to where it once was many years ago," said Secor. "His goals and visions are very much in line with what the board is looking for as far as rebuilding the PGYSA and hopefully building soccer back in the north with Prince George being the hub.

"We're definitely excited to have someone with his education and expertise back home with us. He's been running (Saskatchewan's) high-performance programming for some time and the longer he was there the more they put on his plate. He's been really strong in developing programs in Saskatchewan."

Russell wants to make Prince George a hotbed of soccer talent for post-secondary school programs and even develop players good enough to play on national teams or in professional leagues.

"Within the high-performance stream your plan is to ultimately have players play at the national level and in order to do that you have to have a system first," he said. "The problem was, a decade ago the province was very striated and there was no pathway for athletes to reach the next level, whether it be collegiate environments or just to be an athlete for life, just to be an adult soccer player who is active in the community and above and beyond that, professional and national, so a system needed to be put in place."

Russell introduced his development model to Saskatchewan in 2012 and following Sport Canada's sport policy guidelines he oversaw the seven programs which now make up that province's high-performance stream.

The pathway system Russell created identifies the options and training plans for individual players and their coaches which cover all levels of ability, from recreational to competitive. Having that pathway spelled out for them helps them achieve their own personal goals in soccer.

"Historically, we've given a one-size-fits-all model and that's not the way the sport works - the recreational player doesn't need the same thing a high-performance player does, they want two different things," said Russell. "Soccer has been terrible for saying, 'We have this product and you're going to want this product we're giving you.' What we need to be doing is adapting and evolving our product in line with the participant's needs and wants."

At the height of its popularity in the early 2000s, the PGYSA had more than 3,000 kids playing the game. Back then, Rotary Field was a busy anthill of soccer humanity on any given weekend. Family demographics, with fewer people having kids, and more competition from other sports have contributed to a nationwide trend of declining enrollment, in part brought upon by the screen generation of inactive children.

This year, there's competition for players in Prince George with the inception of an alternate youth soccer organization known as Northern United Football Club, started by a group of parents unhappy with the direction PGYSA was going.

Registration last week in the PGYSA was at 1,430, down from 1,551 last year, which represented a drop of about 500 kids from 2016. In 2003, when Russell's father Gale was coming to the end of a 10-year tenure as chairman of the PGYSA, there were about 3,100 registered youth soccer players in the city.

The younger Russell said he plans to talk to soccer people in the community and seek their advice while he gets used to familiar surroundings again. He plans to use his sport and academic background to build partnerships with other northern B.C. communities to help grow the game.

Russell's wife Drew is a dental hygienist and they have two boys, five-year-old Daxton and three-year-old Kyden. Russell starts his new job in Prince George today.

"I'm excited to be around family again and I'm excited about the opportunity to come home and build a new system and excited for a new challenge," said Russell. "Everything I built here (in Saskatchewan) is done. I always tell players to set new goals and the funny thing is I don't listen to my own advice. When the goals are done, it's time to try something new."