After scoring 11 goals in one game two days prior, the Prince George Spruce Kings had no reason to doubt they’d be able to keep the fireworks flying Friday when they faced the Chilliwack Chiefs.
Apr 9, 2021 8:02 PM By: Ted Clarke 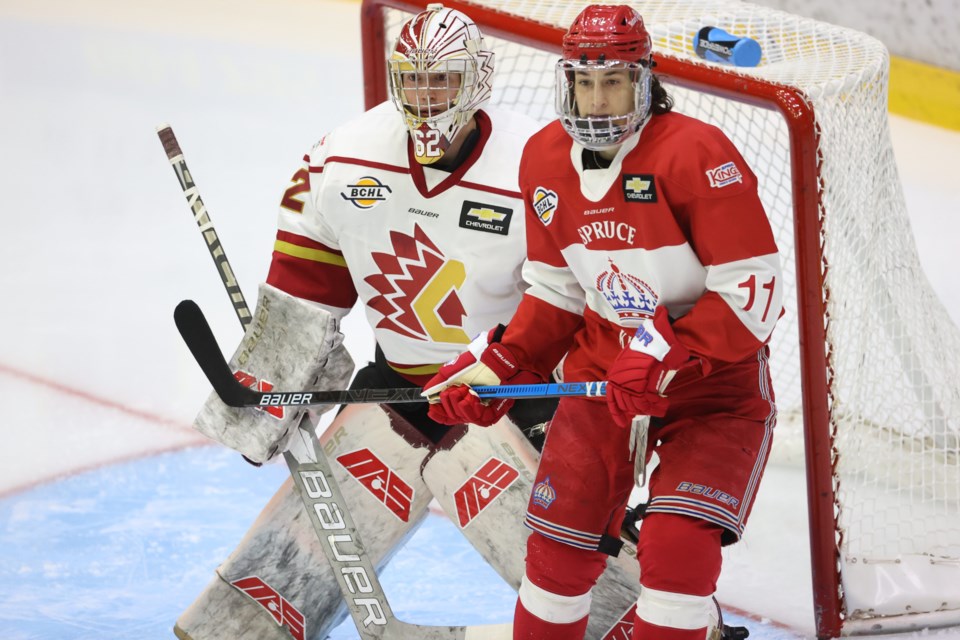 After scoring 11 goals in one game two days prior, the Prince George Spruce Kings had no reason to doubt they’d be able to keep the fireworks flying Friday when they faced the Chilliwack Chiefs.

They had no trouble lighting the fuses but brought nothing but duds with them to the rink at Chilliwack Coliseum, losing 1-0 to the Chiefs.

Dawson Good’s shorthanded goal late in the first period was all the offence the Chiefs needed to defeat the Spruce Kings for the second time this season.

Mathieu Caron was flawless in goal for Chilliwack, making 23 saves to keep the Chiefs (2-2) atop the three-team Chilliwack pod.

The Kings came out flying with a strong and physical first period and certainly had their chances but none of them counted, unlike their 11-2 win Wednesday over the Merritt Centennials, when they skated to one of the most lopsided wins in the Spruce Kings’ 24-year B.C. Hockey League history.

The Kings began the day Friday with the league’s fifth-best power play, scoring on 25 per cent of their chances (6-for-25) but it backfired on them late in the first period. Good gained the puck in the Chiefs’ end and carried it across the line while linemate Brett Rylance joined the rush on a 2-on-1 break. Good let go a high wrister that sailed in over Jordan Fairlie’s glove into the net. That came 16:25 into the game.

Aside from their mistakes off the draw that led to the only goal, the Kings’ power play had plenty of zone time and moved the puck well but couldn’t score. Simon Labelle had two solid cracks at the Chiefs’ net from the left circle before they broke for the first intermission.

After gaining a 12-7 shot advantage in the first period the shots were pretty much even the rest of the game with the Kings holding a slight 23-21 overall edge.

Penalty-killing has also been a bright spot for the Spruce Kings and they came into Friday’s game ranked second in the BCHL in that department. They had to be efficient to keep it a one-goal deficit five minutes into the third period when the Chiefs went to work on a lengthy 5-on-3 advantage. Chilliwack held the zone and tested Fairlie a couple times but for the most part could not get their shots through, not with Colton Cameron and Christian Buono sacrificing their bodies with timely blocks.

Buono, playing his last junior season, dove to clear the zone just as teammate Nick Rheaume was returning to the ice out of the penalty box, setting up a shorthanded breakaway. But Rheaume was unable to bury his forehand-backhand deke in behind Caron.

Buono, the Spruce Kings’ leading scorer with four goals and six points, had a great chance for the equalizer with about 90 seconds left when he took a pass at the Chiefs’ line and broke in alone on Caron down the left wing but Chiefs defenceman Jackson Munro caught him from behind at the last second and tied Buono up before he could get a shot away.

The shutout was Caron’s first this season and sixth of his BCHL career for the 21-year-old Abbotsford native. Caron has played all four games so far this season for the 2-2 Chiefs. The Kings are also 2-2 heading into Saturday’s game against Merritt (5 p.m. start).

Fairlie was also solid in net as the game’s second star with 20 stops, playing in his second career BCHL game.

The Kings were without defencemen Mason Waite and Amran Bhabra, both sidelined with upper-body injuries suffered in Thursday’s game against Merritt. Tanner Main, a 21-year-old defenceman who broke his ankle in a preseason game in November in Trail, played his first game in five months. It was his first league game in a Spruce Kings’ jersey, having joined the team in the of-season from the Wenatchee Wild. Rookie winger Kilian McGregor Bennett also returned to the Prince George lineup after missing two games with an injury.