Elena Thomas, president of the Prince George Track & Field Club (PGTF), was recently honoured by BC Athletics for providing outstanding service as an administrator.
Feb 1, 2021 5:54 AM By: Christine Hinzmann 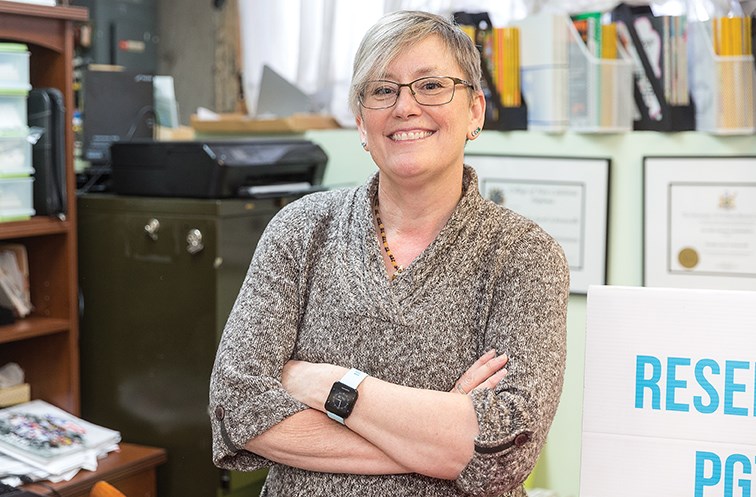 Elena Thomas, president of the Prince George Track & Field club was recognized for her Outstanding Service as an Administrator by BC Athletics. Thomas made sure athletes could train safely with all protocols in place during the pandemic. Citizen photo by James Doyle

Elena Thomas, president of the Prince George Track & Field Club (PGTF), was recently honoured by BC Athletics for providing outstanding service as an administrator.

Because the COVID pandemic significantly impacted all sports, BC Athletics altered its award categories to better recognize members who adapted and continued to perform at incredible levels of dedication, whether as coaches, officials, administrators, volunteers or athletes.

Thomas is being recognized for going above and beyond in her commitment to support club members, creating competition opportunities and leading community engagement.

Soon after the coronavirus pandemic shut everything down, Thomas spent a month creating a 25-page document so track and field practices could be held once provincial health orders were lifted to allow athletes to practice in small numbers while following all safety protocols to protect against the spread of the virus. The document Thomas created contained protocols, guidelines and procedures to prevent the spread of the coronavirus before there was even such a document in existence.

Thomas had to submit the return-to-sport guidelines to the city for approval before the PGTF club could rent Masich Place Stadium for practices. The local track and field club was able to hold practices for half the summer and well into the fall where about 30 athletes were able to train twice a week.

Thomas facilitated the Masters World Virtual Challenge, a competition for some athletes and spent hours at the track volunteering during the practices held in 2020.

Thomas started with the PGTF club as a parent of an athlete, her oldest son, Max, when he was 12 years old. Max, now 19, used the summer training as a method of cross training for speed skating.

Max didn't want to run so he wasn't too keen on joining the club until it was suggested to him to try throwing. In track and field, young athletes can throw implements including shot put, discus, javelin and hammer throw.

"He spent a day trying it and came back saying he wanted to throw and it became his passion," Thomas said. "So, of course, I had to volunteer. As a parent you have to help in some way."

Back then, the PGTF maintained the stadium so Thomas grabbed a shovel and turned over the sand in the jumping pits, helped get equipment out for the athletes, put it all away again and signed the children in for their sessions.

Thomas became treasurer quite early on and her volunteerism increased from there.

As Max started traveling for competitions, he encouraged his mom to start throwing, too.

"He loves it, it looked like fun so I started to throw," Thomas said.

She has competed in the Masters category since 2016 and in 2020 was ranked number one in Canada in the hammer throw in her age category.

On the administrative side, Thomas took over in 2018 when the past president stepped down.

Thomas knew that during the pandemic the athletes were just looking for something to do.

"Because our track club and athletes have gone through so much over the last few years with the stadium being closed for renovations for two and a half seasons and having to train at Lac De Bois and then we got one season into the stadium and then the doors got shut because of COVID - I just know that these kids wanted to play, they need to play - they needed to do something and everything was shut down - everything! Surely there was something we could do? The weather was spectacular, there were no wildfires, no snow and we had stadium access - we didn't have to go to a field. There are kids out there who want to be Olympians and they're not going to get there without the track club. They have big dreams and we have to help them."

As far as being recognized for her Outstanding Service as an Administrator by BC Athletics Thomas is a reluctant recipient.

"It's very nice to be recognized but I don't feel like I deserve it," Thomas said. "I just did what anyone else would have done had they been in my shoes."

"When we looked at the nominees one thing that we saw across the board was that these were individuals who had put in a lot of time and they were committed to the programs in their clubs, they were engaging their members and the community and one way each of them had gone above and beyond was trying to create competition opportunities in a very odd world," Nettey said. "So when we saw the nomination for Elena we saw all of these things where she had put together - the COVID protocols for the Prince George Track & Field club and right off the bat that was huge because other clubs didn't fold financially but decided to close up shop for the year and try back again in 2021. Right there that showed initiative and commitment to continuing to serve her club and her members and just the time commitment she was spending on the track even though this is a volunteer position."

"There were just so many ways that we saw she really was just going above and beyond in her role," Nettey said. "She is just a tireless advocate for athletes and the program and we're really pleased to be able to recognize her for her outstanding service."

Editor's note: Citizen reporter Christine Hinzmann nominated Elena Thomas to be recognized for her outstanding service as an administrator by BC Athletics.