What began initially as a hobby for a small group of friends has emerged as Prince George's newest micro-brewery. After more than a year of preparation, Trench Brewing officially opened the doors of its own tasting room last weekend.
Apr 25, 2018 10:03 PM By: Stuart Neatby 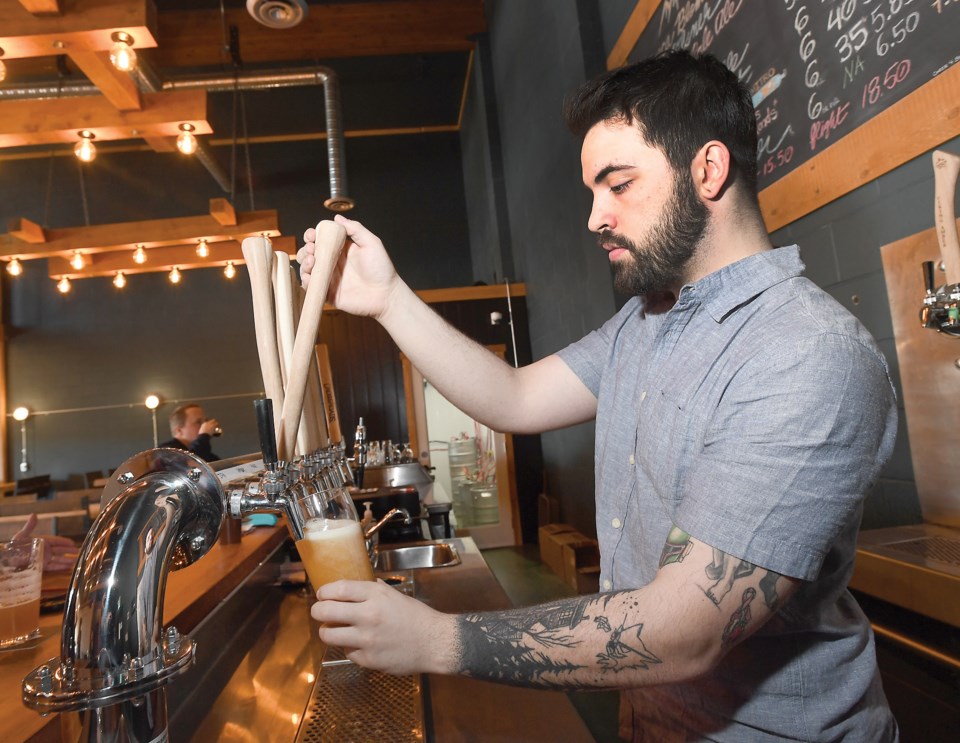 What began initially as a hobby for a small group of friends has emerged as Prince George's newest micro-brewery.

After more than a year of preparation, Trench Brewing officially opened the doors of its own tasting room last weekend. The space boasts an impressive brewing operation, with seven 1,200 litre Newlands Brewings tanks, and a 1,000 litre kettle which owners hope to use for distilling vodka and gin. The brewery has seven local brews on tap, all named after popular outdoor landmarks that will be familiar to locals. Many have already made an appearance at downtown Prince George restaurants such as Kask and Hummus Brothers.

"All of our beers are pretty well named after areas of the Rocky Mountain Trench," co-owner Craig Schwenning said.

"On the continental divide, we love the outdoors."

Located across from a scrap-yard within the old Kenroc building on Second Avenue and London Street, Trench's lounge is set in a decidedly industrial part of town. This location echoes the trajectory of other craft breweries in cities throughout North American. Belying the reputation of the area as simply a part of town one might only enter in order to have a car repaired, Schwenning expects the brewery to draw significant foot traffic in the evenings from people simply looking for a fun place to go in Prince George.

The brewery started as a hobby between Schwenning, his wife Esther and co-owners Bailey and Jesse Hoefels. The four started brewing small batches out of their homes, using the brews to fuel camping trips and outdoor adventures. The idea emerged of starting up a bigger operation. This would eventually lead Schwenning to travel to Europe to take brewing courses with Czech Minibreweries, a consortium of manufacturers of small breweries, whose stated mission is to spread the reputation of brews from the Central European country.

"We spent some time in Prague for five weeks and we brewed every day. We had four days off in five weeks," Schwenning said.

"It was really good for us. We were working with larger systems. Not quite as large as what we have right now, but it took us to that next level."

The brewery obtained the go-ahead to open its lounge from city hall last June. At the time, the plan was to open their doors by the fall of 2017, but logistical and regulatory delays pushed the start date back to 2018.

Brandon Pelletier, the newly-hired sales manager for Trench Brewing, thinks the wait will be worthwhile for thirsty residents of Prince George. He points to some of the more original flavours local beer enthusiasts can expect, such as the Fang India Pale Ale.

"A lot of the breweries in northern B.C. will be doing your standard IPA. It's going to be nice and clear, super hoppy, maybe a little bit of fruit. This is more classified for a New England IPA. So it's hazy and juicy," Pelletier said.

"It's chalk-full of juice and fruity flavours without feeling like we just added a bunch right at the end."

Pelletier thinks the easing away from overly hoppy flavours will be a draw for local drinkers, many of whom may be more accustomed to bigger brands like Kokanee or Molson Canadian.

"People think of craft beer, they think of just that hops in the face. This is going to provide a little bit of that, but it's not going to be overwhelming for Prince George drinkers," he said.

Schwenning said the growing micro-brewery community in B.C.'s north has been overwhelmingly supportive. Both Trench and Crossroads Brewing serve each other's brews at their home locations. Schwenning sees other micro-breweries in the region more as comrades than as competitors, joined together by the collective task of staving off the bland ravages of beer industry consolidation.

"Budweiser is the enemy," he said.