The map of the mountain pine beetle's destruction is so big it can't be contained in one province but the map of the beetle's genetic makeup is so small it fits inside the molecules of an insect the size of a grain of rice.
Apr 4, 2013 1:00 AM By: Frank Peebles 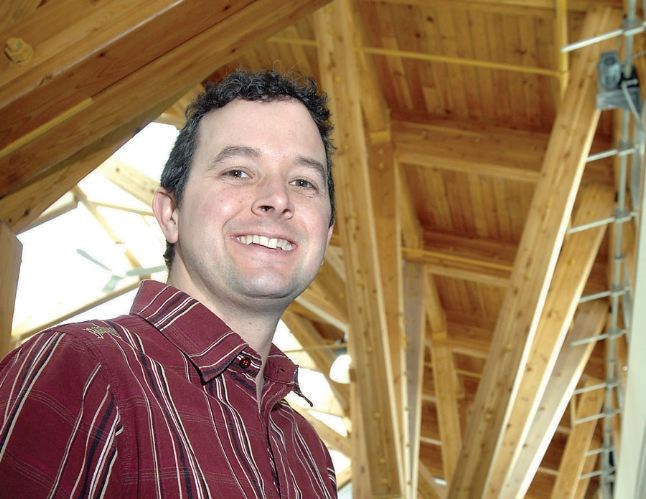 Dr. Dezene Huber was part of the research team that decoded the DNA genome of the mountain pine beetle.

The map of the mountain pine beetle's destruction is so big it can't be contained in one province but the map of the beetle's genetic makeup is so small it fits inside the molecules of an insect the size of a grain of rice.

That genetic makeup has now been revealed by a team of scientists.

UNBC professor Dr. Dezene Huber, the Canada Research Chair in Forest Entomology and Chemical Ecology, was one of these genome cartographers going where no scientists had gone before. This is only the second beetle of its kind to have its DNA mapped out of the more than 400,000 species of beetles in the world.

It was a Prince George beetle that made history.

What the mapping of this beetle's genome means, though, is not directly clear for the forest industry. It certainly, said Huber, does not unlock some secret antidote to the pine beetle epidemic that has gone over the Rocky Mountains, transferred from lodgepole pines to also eating into jack pines just as voraciously, and now threatens the entire continental boreal forest ecosystem clear through to the Atlantic.

"There are no silver bullets in biology," he said. "And there definitely are no silver bullets in forestry. Prior to having these genomic data, we were able to make very substantial but sometimes somewhat slow process to understanding the biology of this insect from a genetic point of view. Now that we have the sequence it allows us to accelerate our research."

Many other research projects are already underway involving the mountain pine beetle and much more could be triggered now that this genome map exists, Huber explained, and it will also accelerate DNA mapping as its own category of science.

The amount of work involved in this research was massive. Huber was joined in this project by 18 other scientists from multiple universities and other facilities. He described the process as "somewhat akin to assembling a complete set of encyclopedias from a bunch of bits and pieces."

They were keenly interested in many other tree pests as well - it seems every species of tree has its own set of parasites and predators - but the onerous work involved meant they were best to focus on the most important one before distracting resources.

"And all of the data are freely available on the internet, so now many other researchers in Canada and the USA and elsewhere can use them to look at new and interesting questions about this insect and related bark beetle species," Huber said.

The decay of the dead pine is unleashing a century of stored up carbon, he pointed out, but using the wood from the dead pines helps offset the estimated 990 megatonnes of carbon dioxide-equivalent greenhouse gases from 2000 to 2020, so harvesting and silviculture must be aggressive, strategic, and planned carefully for its spinoff effects.

"And it needs to be remembered that while the infestation was dramatic, the mountain pine beetle is an important and natural part of western North American pine ecosystems. In their wake they leave behind habitat for all sorts of other creatures," he added. "And the infestation serves to influence what the forest will look like in the future. So anything that we do to manage for economic, ecological, or climate purposes needs to be done with care and attention to potential shifts in outcomes that we may cause."