Funds raised through the dolls will be donated to the Hockey Canada Foundation
Nov 22, 2020 9:05 AM By: Castanet 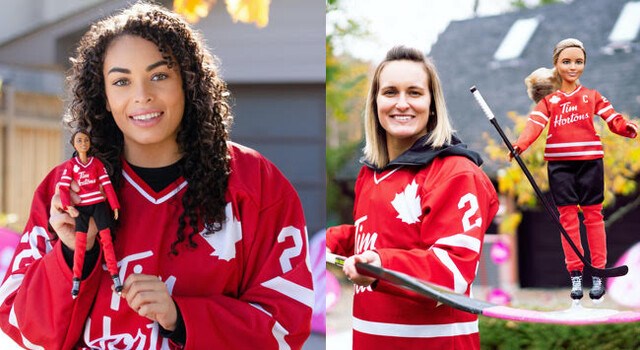 Tim Hortons and Barbie are releasing a hockey doll. (via Contributed)

Barbie has picked up a new hobby with the roll out of Tim Hortons Hockey Barbie dolls in select restaurants, with all proceeds benefiting girls' hockey in Canada.

The new dolls shine a spotlight on two Canadian women hockey players who have broken barriers in the sport; Marie-Philip Poulin and Sarah Nurse.

Funds raised through the dolls will be donated to the Hockey Canada Foundation. The partnership with Barbie aims to show girls that they can do whatever they want, including becoming a hockey player.

The You Can Be Anything program is designed to inspire girls to reach their goals through imaginative play and through exposure to meaningful role models. By only age five, girls can start developing negative and limiting self beliefs but this can be combatted through positive role modelling.

"As a leader in hockey in Canada, it's important that Tims Hortons shows support for young girls who want to play the sport. We want to ensure that girls feel like they belong in hockey just as much as boys do," says Hope Bagozzi, chief marketing officer for Tim Hortons. "We're really excited about the impact of this partnership with Barbie and to show our strong support for girls' hockey."

So why Marie-Philip Poulin? Her game-winning goals, Olympic gold medals for Canada in Vancouver 2010 and Sochi in 2014 and her career accomplishments which helped her earn the title of world's best female hockey player earlier this year.

Sarah Nurse won a silver medal alongside Poulin and Team Canada in PyeongChang in 2018. She is also an ambassador for the Professional Women's Hockey Player Association (PWHPA).