Pauline Tom is thanking a summer program aimed at Indigenous youth for not only teaching her some of the skills to make her a productive member of the workforce but for getting her out of bed in the morning.
Aug 7, 2019 9:24 AM By: Mark Nielsen 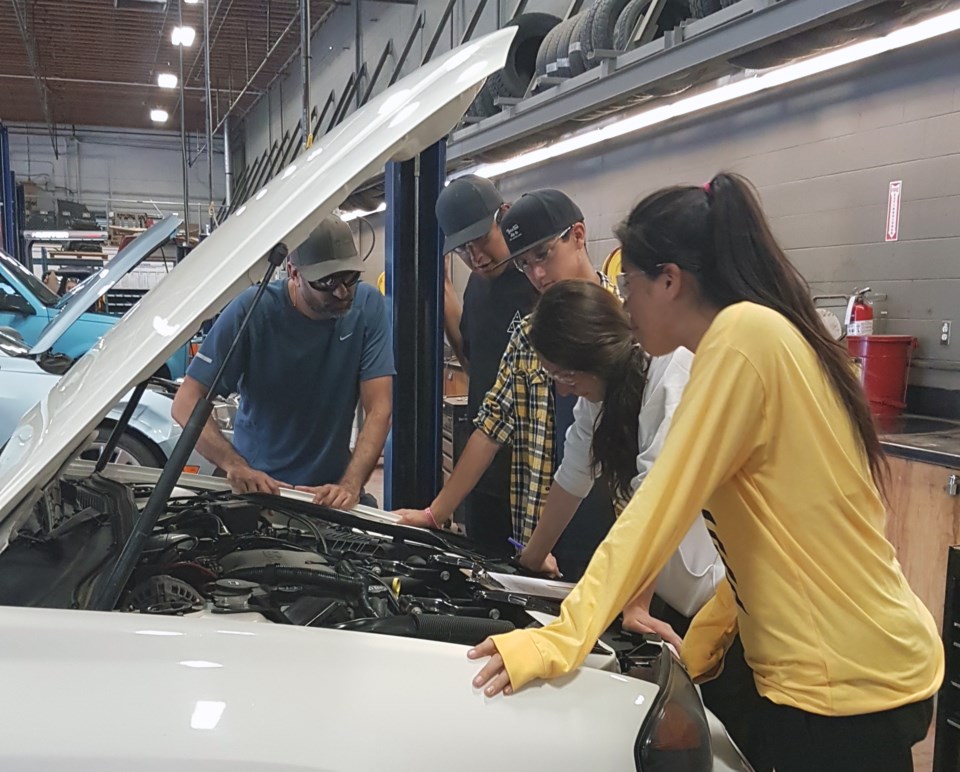 The College of New Caledonia's automotive repair shop were among the stops Tuesday for those participating in OYEP.CNC handout photo

Pauline Tom is thanking a summer program aimed at Indigenous youth for not only teaching her some of the skills to make her a productive member of the workforce but for getting her out of bed in the morning.

"I had no motivation to do anything," she admitted when asked about the benefits of participating in the Outland Youth Employment Program. "I'd just stay home all the time, not leave my room, not leave my bed.

"But here, I have to wake up at seven in the morning and sometimes earlier than that and it just gives me something to do every day...I love my sleep."

At 17 years old, Tom could probably be excused for being a little lazy in the morning. A member of the Wet'suwet'en First Nation, she is among 25 high school-age young people from across the Central Interior participating in the six-week program.

Their days have been full.

For the first two weeks, they were out in the bush where they honed their skills as tree planters and did brush saw work and while also learning wilderness first aid.

This week, they're in Prince George where they're exploring post-secondary opportunities at the College of New Caledonia and the University of Northern British Columbia.

It hasn't been as back breaking but arguably just as intense.

Dubbed Science Week, the itinerary includes a tour of the College of New Caledonia campus with an emphasis on the college's applied research and innovation department and a trip to Ispah Lake to get hands-on experience in natural resource and forestry-related research techniques.

From there, they go to UNBC and visit the I.K Barber Enhanced Forestry Laboratory to learn about tree coring, dating culturally modified trees, and tree identification. It wraps up with a terrestrial vertebrate lab demo and in fish lab exercises and a tour of UNBC's bioenergy plant.

Next week, they'll be back at Camp Hughes - which they're renting from Scouts Canada - where they will continue to pick up the skills meant to make them valuable employees wherever they may find themselves, although the focus is on working in the natural resource sector.

Operated by Outland, which provides camp and forestry support services, OYEP originated in Ontario 20 years ago and has since expanded into Manitoba, Alberta and British Columbia, where it is now in its second year. A variety of sources - government, private sector and First Nations - fund the program.

There is also a touch of Indigenous culture in the mix.

Elders from the Lheidli T'enneh First Natiion have made appearances and left Sarah Dixon both impressed and inspired.

"Just saying they believe in us, even though they don't really know us well," said Dixon, an 18-year-old member of the Esketemc, west of Williams Lake.

For Marlene Erickson, College of New Caledonia's aboriginal education director, the week at the college and UNBC are particularly important.

"We find that Aboriginal youth don't transition to post-secondary at the same rate and even though our population is generally younger, the average entry age for Aboriginal people is about 30," she said.

"By then, they have families and bills to pay and it makes it that much more challenging to be successful and so programs like this are really important to try to get aboriginal youth to get into college right after (high school) graduation."

The idea, she said, is to give them a chance to "see the possibilities."

"It just gives them the confidence to know that it is 'accessible and open to me and I can do it,'" Erickson said.

Both Tom and Dixon plan on going into nursing upon completing high school. And while the skills they are learning through OYEP are not directly related to their goal, both believe they will help them along that road. After all, they already have a head start on working that classic student summer job of tree planting.