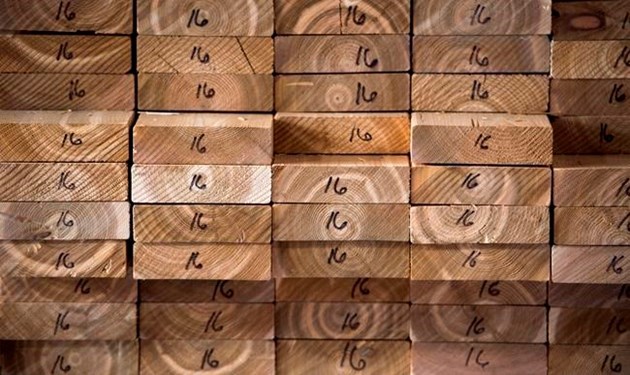 Canada's softwood lumber industry is struggling as it faces down two of the biggest challenges facing the country — trade disputes and climate change.

In B.C., where the industry is concentrated, companies have been cutting back shifts and closing mills as a lack of log supplies and low prices bite, with more closures expected to come.

"It's not a happy situation right now if you're in the lumber business," said Russ Taylor, managing director at Forest Economic Advisors Canada.

The impact of high log costs in the province — brought on by a lack of supply from the lingering pine beetle outbreak and back-to-back record wildlife seasons — was tempered last year by record high lumber prices.

But prices plunged last fall to usher in a wave of temporary mill shutdowns in B.C., and a second wave has been playing out in recent weeks as prices fail to recover.

Earlier this week Interfor announced it would cut back on operations for June, joining in the temporary curtailments already rolled out by Canfor and West Fraser. Tolko said in mid-May it would shut down its Quesnel, B.C., mill altogether at a loss of 150 jobs and a shift at its Kelowna, B.C. mill for another 90 jobs gone.

BMO analyst Mark Wilde calculates that the combined cuts add up to about 500 million board feet or some 0.8 per cent of North American annual lumber production, which he said is wholly inadequate to deal with the lack of raw log supply and the "very ugly" market.

"It is a bit like medics treating battlefield wounds with Band-aids. They won't stanch the bleeding in a horrible market," he said in a note.

Prices were never expected to stay at the highs of last summer, but they're now less than half of where they peaked as lower-than-expected U.S. housing starts keep prices down. The slow housing market has been blamed on extremely wet weather, which the U.S. government said was the rainiest May to April since records began in 1895.

Meanwhile the warmer, drier weather in Western Canada could also be contributing to spruce bark and Douglas-fir beetle infestations, said Taylor, while a wildfire currently burning near High Level, Alta., has forced Norbord Inc. and Tolko to close nearby mills.

"It is weather, and everyone's been blaming weather on and on and on, but it's still weather...There's just stuff going on all over the place, a lot of it's tied to climate change," he said.

The pressures on raw log supplies in B.C., which will increase under efforts to protect woodland caribou, mean the province will likely lose 12 mills in the next decade according to a report commissioned by Forest Economic Advisors Canada.

"This will likely result in a faster-than-expected rationalization of the B.C. lumber industry," he said in a recent note.

At the same time, Canada's industry has been struggling under U.S. softwood tariffs imposed in 2017.

Taylor estimates that the tariffs, which average about 20 per cent, push mills in B.C. and Quebec from about a break-even point to a negative 15 to 20 per cent loss.

Moody's Investor Service analyst Ed Sustar said the duties are taking a bite now that prices have fallen so much.

"It's more major now that prices have compressed. That 20 to 25 per cent tariff, that's real cash that each company has to pay on all their exports, so that's definitely hurting, especially B.C."

In the last major round of softwood tariffs in the early 2000s the companies got back about 80 per cent of duties back, but the dispute took five years to resolve, said Sustar.

"We're only into this for two years now, it could take another couple of years before another softwood lumber agreement gets signed."

When the last agreement was reached, B.C. majors like Interfor, Canfor, and West Fraser used the windfall of refunded duties to establish footprints in the U.S., he said. Those footprint are still growing, with the three companies now owning more mills in the U.S. than Canada.

The U.S. South has lots of log supplies after a lack of harvesting after the housing crisis, and government incentives to plant trees, which is attracting some two to three new mills a year.

"I do think it's going to be more of an ongoing progression where the U.S. satisfies more of its own needs."