RCMP officer speaks out about PTSD 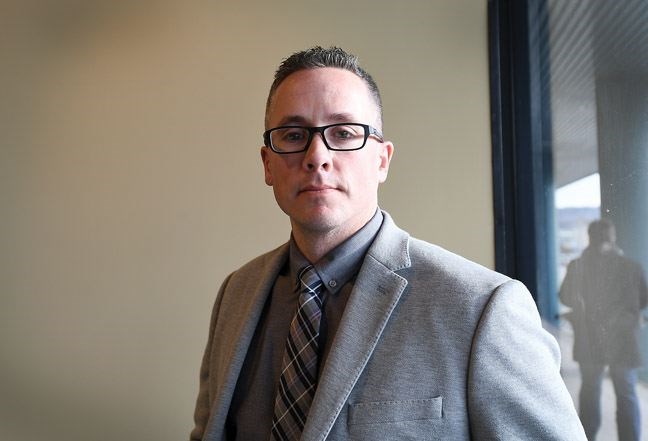 RCMP Staff Sgt. Kent MacNeill gave an exclusive interview to The Citizen on Feb. 3 to speak about his battle with post-traumatic stress disorder (PTSD), and raise awareness about how the condition affects first responders and others.Brent Braaten, Photographer

A shaken baby. The body of a sex trade worker. Two young people brutally murdered as part of a local drug war.

It took the accumulation of these and other events for one local police officer to finally accept his diagnosis of post traumatic stress disorder (PTSD) and to speak publicly about his condition.

MacNeill knows it was being exposed to trauma and violence over a long period that led to his PTSD.

"I was new to the major crime unit and we had investigated a pretty horrific file where a father violently shook one of his two twins to where, to this day she has no quality of life."

MacNeill was looking for a confession to the Oct. 1, 2009 assault as he went into the interview room with the father.

He remembers the sickening feeling of trying to commiserate with the man about how frustrating it is when babies cry for no apparent reason and how difficult it is to deal with it. He had his own baby at home at the time.

"You're trying to get to the truth, you're trying to get a confession and part of that is putting your own morals aside very reluctantly to try to talk to these people so I engaged in stories where I said I was tempted to shake my own daughter. These are things that we do sometimes just to advance the file and he confessed and he reenacted what he did to his little girl."

MacNeill felt the true impact of that confession when he got home that night.

"It was the first time that I ever broke down after work," he recalled. "I was crying, I was holding her. It was very, very hard. Looking back now that was the catalyst that got this ball rolling in the wrong direction."

MacNeill sees the victim of this crime to this day. A friend of the family adopted the girl years later.

He knows she's got cerebral palsy and sees firsthand her chronic health issues, in stark contrast to his own healthy daughter.

As he thinks about it, MacNeill finds himself back in the windowless interview room at the moment of the father's confession.

"Being nice to a person like that, shaking their hand and thanking them for being honest is very hard to deal with," said MacNeill.

"Because you know, you don't really want to shake the hand that did that to his daughter."

The man was sentenced and sent to jail in 2012.

"And that file went away," said MacNeill.

The memory, however, still lingers loud and clear, as do others.

In 2008, MacNeill was sitting at his desk when he got a phone tip to go to a house in the 2300 block of Webber Crescent.

"I knew someone was dead inside that house," said MacNeill.

First on the scene, MacNeill and his team discovered the brutally murdered bodies of Garett McComb, 23, and his girlfriend Brittany Giese, 19.

MacNeill had been on a first-name basis with both victims from his time with the drug unit.

A couple of weeks before their murder, the police executed a search warrant on McComb's house.

After the search warrant was complete, MacNeill gave McComb and Giese a ride home.

"I knew Garett for years because of his lifestyle," said MacNeill.

MacNeill said he really liked McComb, something that he couldn't say about most of the people he dealt with.

"When I dropped them off I warned him, 'Garett, you can't do this, it's going to catch up with you', he laughed and he blew me off and said 'don't worry about me,' so I dropped him off."

MacNeill said he still thinks about the young couple often.

"That was a bizarre circumstance because I ended up finding her body at L.C. Gunn Park," said MacNeill.

When sex trade workers were going missing, the police were all hands on deck, said MacNeill.

"Everyone was looking for these girls, they were vanishing and we didn't know what was happening."

MacNeill and his partner were doing overtime shifts, looking for sex trade workers and johns that would talk, desperate for leads.

L.C. Gunn Park was a common place for the workers to take their customers.

MacNeill and his partner drove up the goat trail at the park one day in the fall of 2010.

Coincidentally, a vehicle was coming down the trail as the officers were going up. When questioned, the driver told an odd, disjointed story. Despite the unlikely tale, it turned out the man had not done anything wrong but MacNeill still had his concerns that something wasn't right.

"He gave me just enough of the heebie jeebies to call for a dog to come to the scene to check the area," said MacNeill.

For two hours, the search continued and MacNeill told the dog handler his feeling that they were going to find a dead body.

During the search, the police come across an area filled with garbage with an especially foul smell.

"I never realized until recently how much that file affects me. I met Cynthia's family shortly after the fact and it's one of those things that really sticks with you."

MacNeill was first diagnosed with PTSD around the same time as the discovery of Maas's body, more than seven years ago. He refused to accept what the psychologist told him.

"I dismissed it as the flavour of the day," he recalled.

"That's not me. I'm a cop. I'm tough. I face fear every day. There's no way I have post traumatic stress disorder."

He went home and told his wife and other members of his family what the psychologist said, dismissing the diagnosis.

"Probably the worst decision I ever made," he said.

"I now know he was bang on. But then I wasn't a believer."

While some people coping with mental health issues choose drugs or alcohol to self-medicate, MacNeill turned to his work. The worse he felt, the harder he worked.

"I should've been investing in my family," he said. "They were really the ones that were bearing witness to it. I was keeping it together at work but at home it was more obvious. I couldn't hide it as much."

His symptoms included slowly pulling away from his loved ones, especially his wife and children. He said he frequently shut down his emotions and became "void of empathy."

While that part of his mind was deadened, he said he couldn't turn off his fight or flight instinct. Remaining constantly vigilant, both at work and at home, was exhausting.

"I worry about too many things and I am far too overprotective of my family," said MacNeill.

"The lines between my personal life and my police life almost dissolve."

MacNeill's mental challenges continued to build until last fall, as he prepared to testify in a difficult case before the courts.

"Then I gave my evidence and it just got worse," MacNeill.

He finally told his wife how he was feeling, he shared a bit of it with his children, and reached out to his now-retired Mountie father, as well as his brother, also a member of the force.

"I was in such a bad place that I finally came clean to my wife, to my kids," said MacNeill. "It was a very difficult conversation to have but I finally said 'listen I can't do this anymore and I gotta tell you actually what I'm feeling and thinking every day.' And I told them that something was wrong, that this wasn't just depression, this isn't just anxiety."

An OSI is the clinical term used to describe the psychological difficulty for first responders like police or armed forces members to carry out their duties after an incident or a series of traumatic events.

MacNeill attended the OSI clinic in Vancouver for assessment recently. He is taking medication to help him deal with his confirmed diagnosis of PTSD and he is now on the waiting list for a treatment program.

"Going down to the clinic was wonderful, when you go to a place where everybody gets you and you're in the waiting room looking around and you know that you're probably looking at other people that are going through the exact same thing as you, it makes it a lot easier," said MacNeill.

Talking about his feelings, both with his family and with mental health care providers, felt "like a million pounds was lifted off my shoulders."

He knows, however, that some of his friends and colleagues will be as disbelieving of his PTSD as he was seven years ago.

"I had become very, very, very proficient at hiding this," he explained.

"Most people when they see this in the paper will be shocked."

Bill C-211 calls for the development of a comprehensive federal framework to address post-traumatic stress disorder.

The bill's second reading will be heard this afternoon in the House of Commons.

Regardless of the political outcome of the proposed bill, MacNeill remains focussed on getting better and learning more about his condition.

"I didn't really have any answers as to why I was feeling so bad," he said. "Now what I'm starting to learn, of course, is my PTSD isn't so much about flashbacks and nightmares, my PTSD is more about repressing and trying to forget."

That is next to impossible for MacNeill. After 16 years in law enforcement in Prince George, memories of past cases are everywhere.

He says he looks at the cutbanks at least 10 times a day and every time he thinks of Maas.

"I drive to work, I drive by two homicide scenes I investigated."

When he drops his children off at school, he drives by the location where a man was shot and killed in his front yard.

"That's, I think, one of my big issues, I've been in Prince George for so long, I've done so many horrible files that I really can't avoid the reminders. I physically see it all the time and I say to myself that's this scene and that's that scene, that's this scene and I just can't seem to escape it."

Const. Jason Gillis built a sweat lodge on his Blackburn property last summer in order to reconnect to his aboriginal heritage but also to help in his own recovery from PTSD.

"There's the hope that some other members are willing to come forward, even if they just come see me directly or whether this directs them to a health care provider," said MacNeill.

"My biggest hope is that we deal with some of the stigma around it."

MacNeill knows there are others suffering because they are scared to admit they are hurting.

"And just like myself they'll go for seven or eight years masking it," said MacNeill.

"It's exhausting trying to keep up appearances when you're inner turmoil is so constant that when you finally get home you just shut down.

"I didn't have anything left because it was just so hard to keep it together at work. I just don't want others to wait like I did."