Problematic Ospika Blvd. crossings to be upgraded in 2020 ahead of new Prince George city-wide strategy

Work will go ahead upgrading two problematic intersections on Ospika Boulevard this year, ahead of the city’s proposed pedestrian crossing strategy aimed at improving crosswalks throughout Prince George.

The new crosswalk strategy is looking at the city’s 169 existing marked crosswalks, excluding traffic signals and provincial crosswalks, and 33 requested new ones.

Out of the 202 being evaluated, 43 crosswalks are recommended for upgrade or installation with 26 existing and 17 new ones.

An annual budget of $500,000 over 10 years ($5 million each) would be required to support upgrades and installations for these 43 pedestrian crossing locations.

However, work will go ahead this year to upgrade two problematic sites on Ospika Boulevard where pedestrians have been hit by oncoming traffic, under the city's current Pedestrian and Traffic Safety Improvements Program.

On May 31, 18-year-old Sean Lode was hit by a car while using the crosswalk at the intersection of First Avenue and Ospika Boulevard on and subsequently hospitalized with a brain injury.

His family then created a petition to have the crossing upgraded which garnered almost 3,700 signatures.

On Nov. 24, 2019, a 22-year-old man was injured in a pedestrian-involved collision at the intersection of Ospika Boulevard and Davis Road and suffered life-threatening injuries.

The city’s current program has a budget of $150,000 annually, adding work will proceed with upgrades at these two locations in 2020.

For the other 43 crosswalk locations in the city, survey, design and analysis would not begin for initial locations until 2021, if the strategy is approved by council. 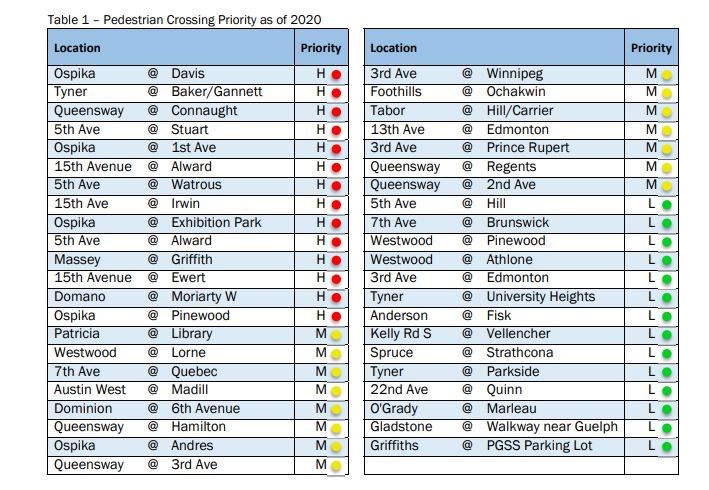 The new strategy is needed to implement pedestrian crossing upgrades as prescribed by the Transportation Association of Canada (TAC), which is the primary reference for municipal governments planning, assessing and designing pedestrian crossings.

The report says if council approves the new pedestrian crossing strategy, individual projects would be adjusted annually as required to fit within the approved budget.

This means a mixture of high, medium and low priority pedestrian crossings would be completed each year. 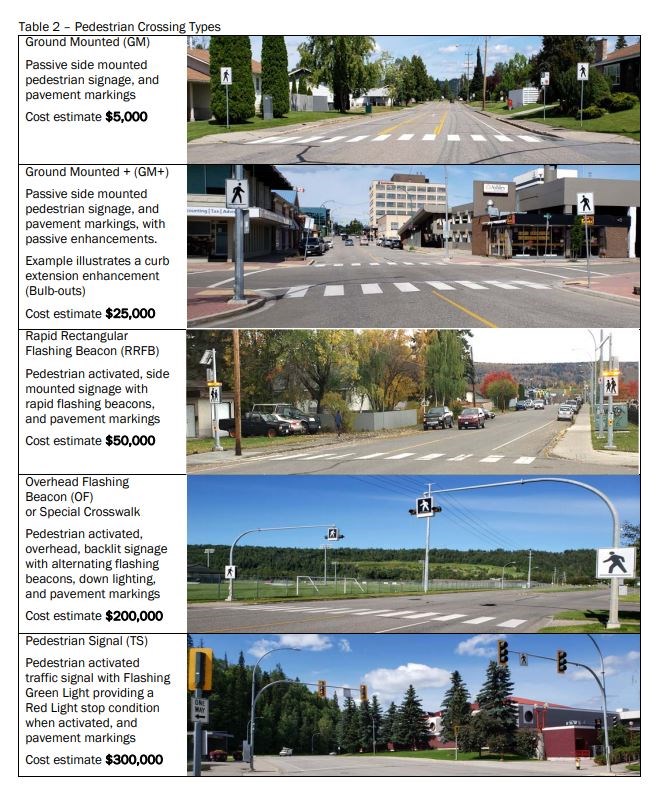 Types of crosswalks and associated costs. (via City of Prince George)

City council will receive the Pedestrian Crossing Strategy for information at the next public council meeting on Monday (Aug. 17).

Staff will then have to submit an enhanced pedestrian crossing capital budget request for city council’s consideration during the 2021 budget deliberations.

You can also read the report in its entirety online.