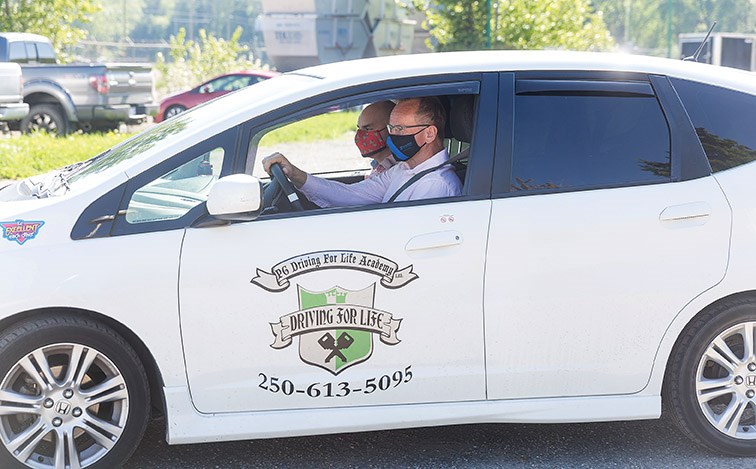 I failed my driver’s test.

Chris Schulz, my instructor from PG Driving For Life Academy, broke the news to me in the Citizen parking lot when I asked him to critique my one-hour cruise through the city streets.

We went through the gamut of shoulder checks, lane changes, parallel parking, blind-spot explanations, road sign quizzes and watching for wayward drivers in intersections and in most cases I passed those checks without incident.

My downfall came when Chris asked me to take the right exit off Massey Drive for the second time and head up the hill on Griffiths Drive towards Prince George Secondary School. I slowed down to 30 kilometres per hour on the first pass but the second time I got caught doing 35 as we sped past the school zone sign – an automatic failure in any driving instructor’s book. Good thing the RCMP weren’t out there with their radar.

“Your observations were OK but your shoulder checks probably would have gotten you (a fail) and I got you in the 30 zone speeding,” said Schulz. “You weren’t super over but you were over enough. If you’re over the limit and I count to five and you haven’t gotten it back down again, you’re failing. You have to be consistent in all your habits to pass your road test.”

With the school year coming to an end and summer vacations just around the corner and new drivers sporting their ‘L’ and ‘N’ plates out in full force trying to get their licences I thought it might be a good time to feature one of the city’s career driving instructors and the work they do teaching people the right way to drive.

The 42-year-old Schulz has been a driving instructor half his life. He started out when he was 21 and by the time he hit 24 the PGSS graduate already had his own driver training business started. He was working in the city as a courier when his mom saw an ad looking for instructors for Young Drivers of Canada. He was one of 50 applicants for two positions and he worked in that job for three years until the franchise folded, and in November 2003 he started his own school, backed by his parents and Community Futures Development Corporation. The business struggled at first but by 2005 he’d hired his first instructor to work with him. Driving For Life Academy now has five driving instructors, including Schulz, as well as an administrator/classroom instructor, secretary (his mom Regina) and social media liaison (his wife Jen).

“It takes about a year to get decent at it,” said Schulz. “I was really young and looked really young and that worked well with students but parents would always look at me sideways. The training for the job is difficult and it can be a challenge to find instructors. They usually have to go to the Lower Mainland for between two weeks and a month of training.”

Schulz says driving too slowly and failing to shoulder check to the right are the two most common reasons for failing a driver’s test.  The speed limit on unmarked Prince George roads is 50 kilometres per hour and 30 km/hr in playground/school zones and he tells his students to try to be five km/hr under the limit in whatever zone they’re in.

Our lesson took us along Second Avenue to Brunswick Street, which he says is the most commonly-run red-light intersection. The road climbs as it reaches Victoria Street right into the line of vision where people see a green light and they fail to see the traffic light at Brunswick. He warns his students to avoid crossing Second if they’re on Brunswick just because the westbound drivers often fail to stop for the red light.

Instructors like to see students scanning every intersection for traffic. One of the tricks of a road test is to ask the driver approaching an intersection to follow the lane they are currently in and the student is given no other directions. So they have to follow where the lane takes them. If that means a turn, that’s usually readily apparent when the turn arrow is painted on the road, but in spring those lines are obliterated by winter driving and it’s up to the student to know what’s expected. Right-hand shoulder checks and signals are required whenever you turn your car to the right.

“Getting students to do it consistently is hard,” he said. “You can look a thousand times and not see anything and the one time you don’t look there will be a cyclist.”

Defensive driving means not only allowing the necessary following distance between you and the car ahead of you but also trying to avoid driving in another motorist’s blind spot whenever possible to avoid lane-change accidents.

“Until you can see his face in the side-view mirror, he can’t see you,” Schulz said. “You always want to make the assumption that they’re not going to shoulder check because so many people just use their mirrors when it comes to lane changes.

“For so many students the test is passed or failed based on what their observations look like. The mantra in manoeuvres for students (when parallel parking) is slow car, fast hands; the car moves very little but there’s lots of steering involved. Instructors of new drivers want to see some kind of hand over hand or shuffle on the wheel and they don’t want to see palming.”

As habitual as it is, Schulz says it’s a no-no to drive with your thumbs inside the steering wheel  as opposed to resting them on the edge as your hand holds the wheel. Not only does it put your wrists on the inside of the wheel, leaving them in the line of fire if the airbag explodes in a collision, but if the wheel is wrenched from your hands it can lead to broken thumbs, which take months to heal.

Prince George has nine of the 10 most dangerous intersections in northern B.C. and all of them cross highways. Chris made sure to guide me through one of the most confusing intersections in the city, at the top of Griffiths Avenue near PGSS where it meets 22nd Avenue and Highway 97, which has multiple lanes of traffic merging together.

“Of all the highway intersections the one I find most dangerous is 10th Avenue crossing Highway 97,” Schulz said. “That intersection is so bad for the rigs running the light. If I’m working consistently I see that light being run once a day. When I have students I make sure they scan to make sure it’s safe before they go into that intersection.”

There are no reduced insurance rates for new drivers who have had lessons but working with a qualified instructor can knock six months off the time it takes to advance from a novice licence to a fully-qualified Class 5 driver. As nervewracking as it sometimes is for parents, Schulz says the more time students spend with them learning to drive, the faster they will learn what it takes to handle a vehicle and know the rules of the road. He also recommends parents take a refresher lesson to make sure they’re teaching their kids properly.

“The biggest challenge we face is that a new student needs to drive a minimum of 60 hours in a year prior to their test,” said Schulz. “Lessons are meant to teach new drivers experience, new skills, and to highlight some of the more difficult areas that they may encounter driving within the city they live.

“This means that outside of lessons with us, the student should be accruing about an hour a week of practice in as many situations as mom and dad or a co-driver can get them. This means driving downtown, on the highway, in residential and business areas. It means practice for the sake of practice. If you want your child to get great at this, you both need to do your homework.”

Schulz sometimes gets legacy clients who learned from him 15 or 20 years ago and now want him to teach their kids. He loves teaching adults who have never had an operator’s licence but have been driving illegally for years.

When you have someone who has been behind the 8-ball all their life, or you do lessons with an adult student who has waited a long time to earn a license, or you teach anyone who struggles with anxiety about driving - when they get their licence and find themselves with the ability to be mobile, that never ever gets old,” said Schulz. “Because you’re changing their life for the better.”