This city is about to go loopy for Cassandra Maze. The pop diva from the Lower Mainland is cutting the dance rugs and pushing download buttons all over Canada.
Oct 24, 2017 9:42 PM By: Frank Peebles 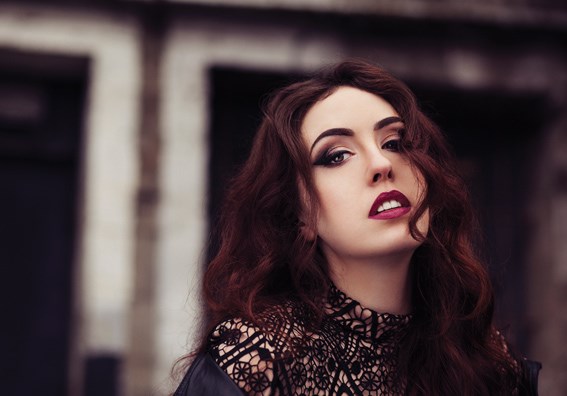 This city is about to go loopy for Cassandra Maze.

The pop diva from the Lower Mainland is cutting the dance rugs and pushing download buttons all over Canada. She makes her first concert appearance in Prince George on Friday at Nancy O's where she will show off her unique one-woman-show performance style.

She is a formidable pop song composer, keyboard and guitar player, and especially uniquely, a loop artist. That entails miniature recordings made live on stage that repeat in a circle, and built up in layers, to form the impression of several instruments.

This allows her to lay down her own accompaniment. When done in front of a live audience, the sound cycles become a part of the show.

The lyrics and melodies do the heavy lifting, however. Her work has been described as alterna-pop or lyrical techno. The basic feel of the song is radio-friendly pop that would be welcome at a dance club, but the vocals are fortified by lyrics written with substance and a star-studded singing voice.

She started her music career as a child taking piano lessons. It just wasn't enough.

"I always loved reading and writing, too, when I was a kid. I was creative in that sense as well." Maze told The Citizen. "When I was about 12 or 13, those two things kind of married. The writing and music came together. I started writing songs on acoustic guitar which I taught myself to play, and then I returned to piano lessons and started writing on piano, too. The writing was always the goal and the focus. Being a musician was just a means to an end."

To hone her artistic brain, she got a B.A. in English literature from Simon Fraser University. To hone her performance muscles she got a job on a cruise ship. Every night on the waves of the Pacific Ocean she would perform by herself in the ship's cafes and lounges.

"Going back to my focus as a songwriter, that's when I really got comfortable playing in front of people, because I was doing it every night," she said. "When you play solo you don't have to follow a grid or worry about what the rest of the band is doing. When you play a cover, you can play it any way you want, you can be improvisational with it, so much more in the moment."

She worked the ship without a backing band. She learned how one person could sound bigger than a lone act. And then she saw KT Tunstall. When the Scottish folk-rocker smashed the charts with the song Black Horse & The Cherry Tree, it also blew Maze's mind. Tunstall built the song piece by piece, live on the spot, using a loop pedal.

"It was kind of an amazing, immediate thing," Maze said. "I bought the same loop pedal she had and as soon as I tried it out I knew that was going to be part of my show from then on. It's gotten more elaborate as time's gone on, adding new tools and new ways of using the loop pedal."

Now, the hits are rolling forth from Maze. The nation's first big look at her work came when she made the Regional Top 10 of CBC's Searchlight competition last year.

Now she has an EP recently released.

Those experiences have launched a pair of crackerjack tunes, Marry The Moon and Wait, that have pleasantly seized the country's attention.

It was a tough choice picking the lead single from the fresh EP she entitled Velocity. She tested the tunes out on her friends and key consultants, and Wait became the consensus favourite.

"I like the message," she said. "I was talking with Tanner Aguiar, the co-writer, (she writes most of her songs alone) about that expression 'good things come to those who wait' and dissecting that concept a little bit. I feel like it's sending a false message, a false sense of security. I get it - that's it's kind of promoting patience, and not being too hasty in life, but it could enable laziness or stagnation. If you don't work for what you want, and step outside your comfort zone, you're setting yourself up to sell yourself a lie."

Most of the people she considers heroes in her life, even in the music industry, are people who work hard for what they've achieved.

So when does Maze get to the border of her own comfort and walk across the line anyway? Surprisingly, every time she goes on stage and every time she has to market her music career. Which, as a full-time musician, is practically all the time.

"I consider myself actually quite introverted so it's been quite a journey to let my walls down and not worry that people will think I'm silly or stupid, turn off that side of my brain, and say no, you have to do this. You have to email people. You have to network with people. You have to be persistent. That, for me, has been a challenge. I'm working towards it. I haven't gotten there yet, but I think I've made a lot of progress."

The Velocity of that progress will be shot into the hearts of a new Prince George audience on Friday night.