The new BC Transit operations and maintenance facility in Prince George will be at the proposed location at the corner of Foothills Boulevard and 18th Avenue.
Mar 3, 2017 10:26 PM By: Barbara Latkowski 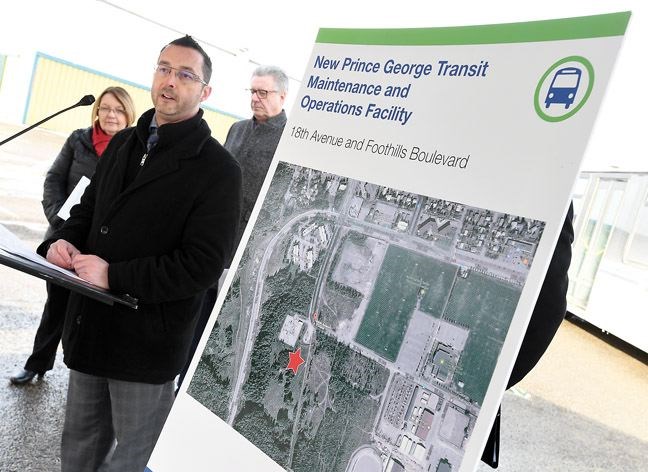 The new BC Transit operations and maintenance facility in Prince George will be at the proposed location at the corner of Foothills Boulevard and 18th Avenue.

"The government of British Columbia is proud to partner with the Government of Canada to improve public infrastructure that will connect people, support job creation and boost economic development," said Shirley Bond, MLA for Prince George-Valemont, during Friday's announcement.

The project, a $23 million commitment with Prince George Transit, is set to meet future transit demands.

"The Prince George Transit System has 1.9 million rides each year and we are committed to expanding transit infrastructure in order to meet the growing demand of the region," said Mike Morris, MLA for Prince George-Mackenzie.

Transportation through the Highway 16 corridor is also on the radar. The service will be available three days a week for those living in communities such as Burns Lake and Smithers.

"This will make it a lot easier for folks to get back and forth," Morris said. "This is a step in the right direction."

The new facility is part of the almost $160 million in federal and provincial funding for B.C. Transit projects which was first announced in June by Premier Christy Clark and Prime Minister Justin Trudeau.

The funding will also support the Prince George Handy Dart system, which is receiving two replacement buses this year to help service those who cannot use conventional transit options.

This also means the addition of modern city buses with improved technology for more efficient service, delivery and safety.

The City of Prince George is set to begin a rezoning process for the new site, which will include a public information meeting to ensure community needs are met.

The public information meeting will be held Wednesday from 5:30 to 6:30 p.m. at the Kin Centre.

"Having a ready and reliable transit service is essential to the growth of our community, and this important and timely investment from all three levels of government supports this goal," said Mayor Lyn Hall.

"The city continues to work with BC Transit to find opportunities to improve transit services that will encourage more people to come on board, while also supporting the needs of our already dedicated ridership."