P.G. has ties to Terry Fox

When thousands of people across Canada line up for the 35th annual Terry Fox Run on Sept. 20, they may want to reflect on where Fox's Marathon of Hope began.
Sep 7, 2015 9:52 PM By: Andrea Johnson 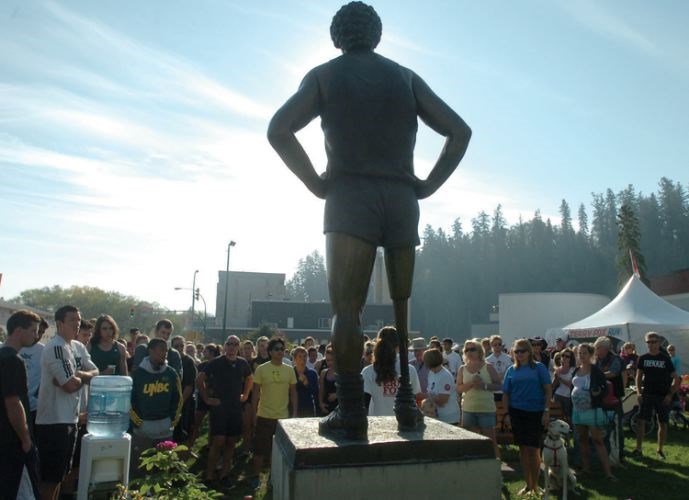 A statue of Terry Fox looms over the opening of the 2013 Terry Fox Run at Community Foundation Park.Citizen file photo

When thousands of people across Canada line up for the 35th annual Terry Fox Run on Sept. 20, they may want to reflect on where Fox's Marathon of Hope began.

Back to when Fox began training for his courageous cross-country marathon in February, 1979, less than two years after having his right leg amputated 15 centimetres above his knee.

He chose to race in the Prince George to Boston Marathon (now the Labour Day Classic) as a testing ground.

The 21-year-old from Port Coquitlam, along with his brother Darrell and good friend Doug Alward and another good friend, a fellow named Rick Hansen, successfully completed the September race.

Fox's success in Prince George gave him the confidence of pursuing his dream of running across Canada to raise money for cancer research and awareness.

Nine months later he began his Marathon of Hope on April 12, 1980 when he dipped his leg into the Atlantic Ocean in St. John's, Nfld.

But his message of hope and legacy continues today - not only in Canada but around the world.

As of May, 2014, more than $650 million has been raised to support cancer research in Fox's name, the Terry Fox Foundation.

It's thanks to millions of people in close to 25 countries participating in the national school run day, The Terry Fox Run and Terry Fox fundraising events.

In Prince George on Sept. 20, more than 1,000 people are expected to lace up their sneakers to walk, run and roll in the five-kilometre event at the Community Foundation Park (at the corner of Dominion Street and Seventh Avenue). It gets underway with registration beginning at 9 a.m. with the run following at 10 a.m.

UNBC's soccer and basketball teams always participate, and UNBC's Northern Undergraduate Student Society have shifted all of their proceeds from various fundraising efforts towards the Terry Fox Run.

McWalter credits more support from the business community who've stepped up year after year, as well as the volunteers and the general public.

The PG Recycling & Return-It Centre is allowing residents to drop off their bottles and empties at their location (2614 Peterson Rd.) where they can choose to donate the proceeds to the Terry Fox Foundation.

At the event, McWalter said there will be a "major" silent auction featuring "thousands of items."

And back by popular demand, Mary Cartwright's homemade chocolate chip cookies will also be available for a donation. Her cookies were so good last year, they sold out.

"Every year, the run has grown in popularity and enthusiasm," said McWalter.

"The great thing about it is that it doesn't cost anything to come down to walk or run around (the course). Just a donation. And I've always been impressed with the number of volunteers. We need 30 every year and right now we're close to that number. They just have so much enthusiasm for the event."

For every dollar raised, 84 cents from every dollar goes directly to the Terry Fox Foundation. People can donate online at www.terryfox.org or the day of the run.