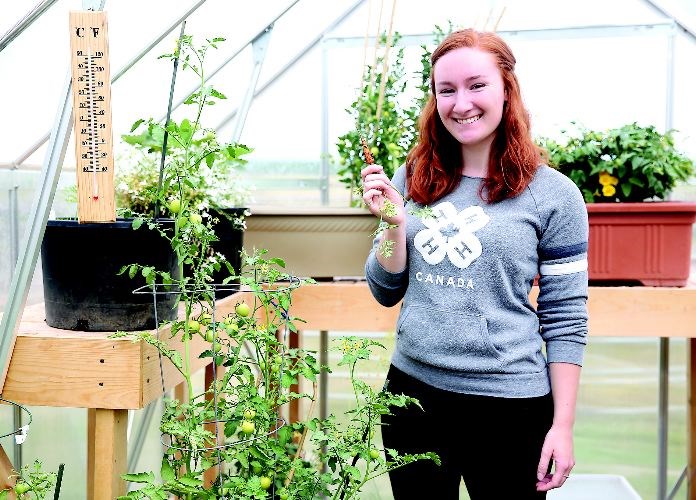 Mackenzie Kerr is a volunteer participant and leader in the local 4-H and wants to take her leadership skills to serve her province.James Doyle, Photographer

But then perspective is everything and when it's been 13 years out of a 20-year-old's life that's been spent focused on volunteer activity, 65 per cent looks like a lot of dedication.

Mackenzie Kerr has spent the last 13 years of her life as a member of 4-H and most recently attended the Global 4-H Network Summit in Ottawa from July 11 to 14.

As a 4-H Canada Youth Advisory Committee member for B.C., she was master of ceremonies for each evening's event where 550 4-H delegates gathered from 35 countries around the world during the summit under the theme of learn to do by doing.

"The global summit was definitely the highlight of my last year as a member of 4-H," Kerr said, whose whole family is involved with 4-H on some level. Kerr's mom, Carlene Heppner, a 4-H leader, has it all planned out. She's confident that when Kerr takes this year off to focus on her university studies in forest ecology, she can still count on her daughter taking on a role as a 4-H leader after that year-long break.

"I know she'll come back to me," Heppner laughed.

Kerr said the summit was the biggest opportunity she's had in 4-H and it has confirmed that her passion for making a difference in her community, country and the world is something she'd like to pursue. Once she's finished her university degree, she would like to make her way up the political ladder until she's the minister of environment or agriculture as those are where her strengths lie.

"Wanting to be a leader in your province, country and your world is something I believe that's instilled in every 4-H member," Kerr said.

Kerr's 4-H BC project for this year is called Self Determined with the focus on the environment, one of the 4-H Canada pillars, which were used as the themes during the global summit. The categories include community engagement and communication, science and technology, sustainable agriculture and food security, environment and healthy living.

Kerr presented her project at the summit during a successful workshop.

Kerr said there were three summit highlights that stood out for her.

The first was the flag ceremony held during the opening of the summit, where each country's representatives were able to dress in their traditional garb.

"It was so inspiring," Kerr said. "They were so proud to be representing their countries. It was just amazing and I had never experienced anything like that before."

The second highlight was listening to keynote speaker Krysta Harden, vice president of public policy and chief sustainability officer at DuPont Co. and past deputy secretary of the U.S. department of agriculture.

"She asked 4-H members - all 550 of them - 'if you're brave enough I want you to come up to the microphone and tell me something that you want to do to make an impact in your community, that you're passionate about and that you'd like to make a change in'. And the line up was out the door."

Kerr's third favourite highlight saw members of 4-H participating in a talent show called 4-H Under the Big Top, where there were many displays of cultural dancing and singing and once again showed how proud people were of their countries.

4-H members around the world may experience different programs but the core values of 4-H shine through, Kerr stressed. The 4 Hs are head, heart, hands and health, which are the same around the world and the organization is constantly creating leaders, she said.

As part of her volunteer duties, Kerr sits on the provincial board of directors and attends three or four meetings a year and as the B.C. Youth Advisory Committee representative she is the voice of youth at the table. She doesn't get to vote but she does bring issues to the board to be addressed.

"Representing all the youth in 4-H in B.C. is my responsibility and honour and that's some of the volunteering that I do provincially and then for the community it's just huge," Kerr said. "We do so many things."

They have public speaking competitions, all communications projects that are usually demonstrations, and judging rallies where youth learn how to make informed decisions about what to look for when judging a particular competition.

The next big event is at the British Columbia Northern Exhibition this week, where 4-Hers are able to showcase their projects in public and then in the fall the youth attend an awards ceremony where they are acknowledged for their efforts.

"There's some amazing opportunities I've had because of 4-H," Kerr said. "4-H has given me that sense of citizenship and community involvement that's prepared me for the future."