Derek Orr has always used his position to uplift local Aboriginal youth. That's not going to change just because his job title did.
Feb 7, 2018 9:22 PM By: Frank Peebles 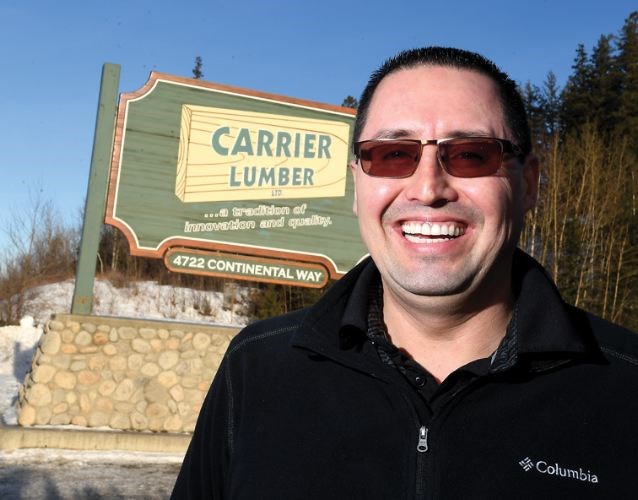 Derek Orr is the business development manager for Carrier Lumber and is looking to create a youth mentorship program at the company.Brent Braaten, Photographer

Derek Orr has always used his position to uplift local Aboriginal youth. That's not going to change just because his job title did.

Orr became renowned across Canada for presiding as chief over the sustained economic strides taken by the McLeod Lake First Nation.

The band is based on traditional territory just north of Prince George at Summit Lake, extending up towards Mackenzie and into Peace-country in a northerly direction, west towards Fort St. James and the Nation River, and to the Rocky Mountains in the east. They are related culturally to the Tse'khene peoples neighbouring them - the Kwadacha First Nation based now at Fort Ware and the Tseh Kay Dene First Nation based at Ingenika.

As of 2000, they are signatories to the Treaty 8 collection of Aboriginal nations.

Always an enterprising First Nation, the McLeod Lake people encountered Alexander Mackenzie on his 1797 journey to the Pacific Ocean. They also established the first fur trading fort in B.C. history, allowing the Northwest Company to set up a post in 1805 at the mouth of the Pack River.

In modern times, Orr and his fellow leaders set up logging and construction companies that did booming business in natural resource projects large and small, while retaining a firm hand on environmental stewardship in relation to those projects.

It was a prosperous balance that continues to this day.

Orr stepped away from the chief's title in June. He was hired immediately by Carrier Lumber to be their business development manager. It was mutually agreed upon that this would include the development and training of young people in the region with an emphasis on Aboriginal youth.

True to his business foundation, he took a fiscal approach to an issue of humanity. He calculated that it costs about $600,000 each and every day to incarcerate the current number of Aboriginal people in Canada.

"If we can keep five youth out of that system and in the school system, the program will pay for itself in one year," Orr said. The investment is even more worthwhile when those five youth go on to have positive lives on the productive side of the social ledger.

By the way, Orr envisions not five but 25 youth, and he believes the program can begin this summer.

The model he's using is from an Ontario organization called Outland Camps. They are already operating summer leadership and employability courses for youth, especially targeting the natural resources sectors.

The First Nations Natural Resources Youth Employment Program has been running in various forms for almost 20 years in northern Ontario, with combined alumni from 41 First Nations. The participants are known as Rangers and learn a number of combination life/employment skills.

Orr is setting the stage to bring a version of this program to Prince George and he has the backing of some powerful industrial interests to see it done. One is his own company, Carrier Lumber, another is petroleum company LNG Canada that pledged startup money, and others are in talks.

The Continuing Studies department at UNBC is also on board to help deliver the course material. It would be for kids aged 16-18 at an as-yet undisclosed remote location where the cohort would live and learn as a group.

"It is designed to give them usable knowledge," he said.

"It's also designed to talk about their Aboriginal heritage, and to relate that to learning," said Orr.

"It's vitally important to retain that age range in school. If we can rejuvenate the interest in school, for those at-risk kids, then we can look forward to having a whole lot more of them pursuing a healthy life and contributing to their communities - the Aboriginal community and the community at large. They not only won't fall through those really negative cracks, but they will become leaders and peer mentors later on."

The Ontario program has an 80 per cent completion rate for those who begin the Ranger training. Of those, 100 per cent of them have gone on to some kind of post-secondary learning and almost 90 per cent of them study some form of natural resources profession.

"What is the value of a healthy life?" Orr said. "I was one of those kids who probably shouldn't have got another opportunity, a second chance, or really a 100th chance. But because I finally 'got it' and I had a lot of help and I came to believe in it, believe in myself, I got to pull out of that dark place I was in and be able to say now that I've had a blessed life. And I didn't even get my turnaround until I was 27. We're trying to intervene on kids 10 years earlier than that."

Orr expects the program to cost about $400,000 each year but as his math revealed, that's a bargain-basement price for future profits on an individual, family and society level.

"One thing we're putting our minds to is scalability," he said. "In Ontario they get 200 applications for 40 spots each summer. I think we can expect similar results, if not bigger, and we have to try to build in some ways to accommodate more of those interested youth. We don't want to limit the positive impacts if we can help it."

Anyone who can help Orr finance and resource this new program is asked to contact him at dorr@carrierlumber.ca.