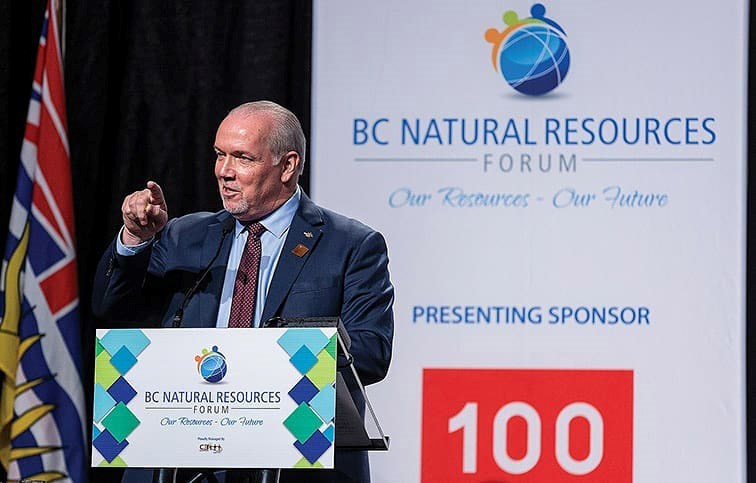 Premier John Horgan and key resource-sector cabinet ministers came to the B.C. Natural Resources Forum on Wednesday pledging allegiance to the province’s resource sector, but found themselves on the hot seat over delays and uncertainty over development.

Horgan delivered a keynote luncheon address in which he declared that “resource development has been part of our spectacular past, and I believe part and parcel of our rosy future.”

He talked about “LNG being on the rise,” with LNG Canada’s $40-billion development that will create thousands of jobs along its path and open opportunities to supply the project, including by Indigenous businesses.

However, Horgan was also upfront in acknowledging challenges that projects face, such as the dispute of Wet’suwet’en hereditary chiefs over the Coastal GasLinks pipeline that has been behind by roadblocks, despite a court injunction in favour of construction proceeding.

“What will keep it all going is a commitment by everyone in this room to acknowledge there are going to be differences of opinion when it comes to economic activity in British Columbia, because it’s British Columbia,” Horgan said. People need to work together on resolving these differences “with a common focus.”

And the opposition latched onto those challenges to cast them as weaknesses in Horgan’s leadership and that of his key resource ministers, Forestry Lands and Natural Resource Operations Minister Doug Donaldson in particular.

B.C. Liberal leader Andrew Wilkinson lead a sizeable contingent of his front bench at the forum, declaring that Horgan and his government have failed to show leadership on files ranging the short-term crisis in the Interior forestry industry to the Wet’suwet’en-Coastal GasLinks dispute.

Prince George, host city of the conference, is in the heart of opposition country, represented by two B.C. Liberal MLAs John Rustad in Nechako-Lakes, who is forestry critic, and Shirley Bond in neighbouring Prince George-Valemount.

“We have a premier who has really lost touch with Northern B.C. and really has no interest in revitalizing the forest industry,” Wilkinson said in response to Horgan’s speech.

Wilkinson spoke briefly to a small pro-resources rally held by the citizens group #TheNorthMatters held outside in the Prince George Civic Centre’s driveway just before lunch, which included Wet’suwet’en leaders who support Coastal GasLinks in part for the jobs that it will provide.

And going on full offence, Wilkinson chose Wednesday to announce that the B.C. Liberals had opened the nomination process for a candidate in the Stikine riding held by Forest Minister Donaldson.

Bond declared that Donaldson and the government had been “missing in action.”

Stikine’s constituents “need an MLA who will stand up for them,” Bond said, by voting in a B.C. Liberal candidate.

Horgan, however, was dismissive of the notion that his government is at risk.

“Quite frankly, the only people that seem to be clamouring for an election are B.C. Liberals,” Horgan said during a media availability.

Horgan said his Green Party colleagues backing the confidence and supply agreement that is holding him in power, including former Green leader Andrew Weaver who is now sitting as an independent, are committed to the deal.

“There’s no need, in my mind, to call an election, but if the B.C. Liberals want to nominate candidates that’s entirely up to them.”